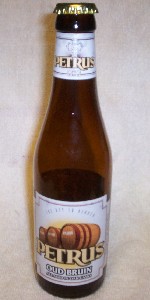 The aromas are simple but solid. Acidic fruited tartness (cider, cherry) with woody and just a touch of caramel malt sweetness.

Flavors of spiced apple, sour cherry, sweet plum, oak and acidic red-wine are present but muted. Although this style doesn't need to be a malic-acid bomb, this iteration seems a touch sweet and reserved.

The brew has a nice light feel, but could use more carbonation.

This is a solid delivery on a favorite style, but is a little too sweet and could use some carbonation and acid.

From notes 10/31/11: The pour is deep reddish brown but produces little more than a collar ring for a head. A delicate sour taste, super aroma and easy to drink. I regret I didn't take detailed notes on each. I'll pick up another bottle for more detailed analysis.

From a bottle. Medium brown color with a thin lacing of bubbles. Mildly sour smell. Medium feel with low carbonation. Dark malt flavors combined with fruity sour notes. An interesting mix, to be sure.

Too sour for me, this one is a weird style that I'm not really into. The astringent bacterial what have you doesn't work for me, I like a more complex character. Pass

Not one I'll return too.

Very nice, poured from bottle to tulip glass. Mahogany in color with decent carbonation and not much head to speak of. Well balanced, with lots of woody, nutty goodness against fruity and slightly tart flavors.

Poured into snifter. Barely a ring of head. Color a rich layered brown.

If I only could only drink Belgian beer for the rest of my life, I'd be very poor. And this would be a primary reason.

From the bottle, it pours a lovely clear brown with a modest head, soon diminishing to a thin layer. A hint of sour in the nose and mouth, along with the malt backbone.

Had on draft. Almost no tartness at all. Sweet and very similar to a dubbel. As a dubbel this would be pretty good; I'm honestly not sure how this is supposed to be an oud bruin.

A brown ale with some kettle sour, oaky wood, and maltiness. The sour wood and malty nutty brown ale work well together although I'd prefer it to have been more sour.

The beer is dark brown with a nice foamy head. There is an aroma of tart and sweetness. The fruit seems a mixture of cherry and dark fruits. Nothing is that strong. The beer is the same nothing very strong. Not very tart or fruit. Seems a little boring. The beer is a little watery.

330ml bottle from Good Spirits Co. Wine & Beer, Glasgow (£2.80):
Quite a pleasant & lively beer with some nice tart & sourness showing despite it being quite a dark looking beer & there was some earthy malts in there too. It was a balanced offering that had nice complexity to it & a nice combination of summer fruits & berries that complimented the caramel malts well. It probably wasn't as enjoyable an offering as the brewery's Petrus Aged Pale & I doubt it's a beer that I'd rush back to but I enjoyed it while I was drinking it & don't have many complaints about the beer really.

Pours very brown with tan head. Decent carbonation. Cinnamon and white pepper in the finish. Almost a nutty aftertaste. Candy from the 70s reminds me if this.

This is just too muddled.

Color is deep brown but cloudy and sightly chalky. Head is great and foamy and lingers well.

Sneha of Brien sugar, stone fruit, and lightly of yeast.

Flavor is sweet malt at the front with Tartness these follows but an unnatural mineral flavor rests in the after taste.

Poured into a tulip, the appearance was a dark ruby red color and allows a low lying almost transparent red color. Finger’s worth of white foamy head started and dissipated gently. Concave film of lace clings to the sides nicely. The aroma starts off with the cask dry woodiness, allows Belgian sugars to permeate nicely-all up in there. Light apple, some cherry. The flavor leads with the woodiness and the sweetness of the cherry. Apple is far underneath. Tame sweet woody dry semi-medicinal aftertaste. Quick sweet finish. On the palate, this one sat about a light to medium on the body with a fair sessionability about it. Medicinal qualities smooth a lot of this out without any expected sour to even make an effort to make a presence. Overall, I liked this one for me, but wasn't too sure how close it was to style.

A: pours with a thin, effervescent, one-finger head, and a deep ruby color, more typical, nice to look at but nothing that sets it apart from others in the style, nice lacing
S: heavy on the funk, with a backbone of cherry, the subtle toastiness of the malt and touches of oak, I even get a suggestion of chocolate and oats, a definite vinous character comes out as the beer sits
T: immediately: 75% chocolate, 25% cherry, with trace amounts of that oaky character that you get from the aged pale, the chocolate maltiness fades a bit (though does remain in diminished form throughout) giving this beer to it's sourness (for a sour beer it's a bit more on the mild end of things, this is not a slam just an observation that the beer is definitely sour, but nowhere approaching vinegar), there is a vinous character here, coming out as the beer opens up, in the form of a very full bodied and overt grape flavor,
M: dry, but not overly so
O: it is definitely on the milder end of the beers in this style (I'm basing this on the more famous examples of this style that I have had) and would be a good entree into the style for those who have not had it or even just trying to get someone into craft beer. It's a good beer, but very far from a great one, call it par for the course (at best 2 under). It has a few distinctions from other examples but nothing mindblowing here.

11.2 oz bottle poured in a wine crystal. L: Brown in color, decent head retention. Sour scale on bottle showed 3 out of 5. S: Fruity esters, very pleasant sour aroma. T: Balanced malt, some dark dried fruit in there, slight sourness. F: Medium body. O: I was hoping for a bit more sourness, but this is on point for the style, which I have not had too many of yet. I look forward to trying other Petrus beers.

Poured from the 11.2 ounce bottle into a clear glass chalice. A moderate pour produces a short, but creamy off-white head. The beer is lightly carbonated and pretty clear, and of a medium yellowish-brown color.

'The aroma is just moderately tart, with an edge of funk. The flavor is pleasantly malty, with a moderate amount of tartness, with notes suggestive of dark fruit and berries, brown bread, light caramel, and nutty bitterness. Light in body and easy to drink.

This is beer number three of a variety pack with a brochure which states that the Oud Bruin is a combination of 70% young brown beer and 30% of their aged pale- considered a "mother beer" because it is the main sour beer used in their blends. This example is more balanced and complex than the first two I drank- the Aged Pale and Aged Red.

Poured from a 11.2oz bottle into a tulip. Pours a deep brown color, mostly opaque until held up to the light, when some light comes through. Head is just under an inch, fades quick, but leaves a little lacing. Smell is sweet like dark plums or figs. Not very sour or funky in the smell. Taste is a little disappointing because it is lacking in the tart and funky flavor I usually expect from an oud bruin, but it does bring great sweet malty flavors, some caramelly and again, dark stone fruit, with an oaky finish. Feel is medium to light in body with a fluffy carbonation. Overall, I expected something else (tart/tannins) but objectively speaking, it's still pretty solid, but maybe as another style. Then again, perhaps, I need more experience within this style.

The beer pours out into a Duvel glass a reddish brown color with a 1/2" off-white head that leaves a few speckles and legs of lacing as it slowly but visibly recedes to an irregular thin foam over part of the surface. Sipping creates a few scattered small patches of lacing.

The aromas include tart cherry, a bit of vinegar and a hint of caramel from the malt.

The flavors are mostly mixed sweetness and sour dark cherry and some other dark orchard fruits. There's some some vinegar-like tartness in the background.

The mouthfeel is medium bodied and lightly prickly with the light carbonation. The flavors fade slowly to leave a bit of vinegary tartness in the back of the palate

This one is not a Petrus ale that I'll revisit since I didn't particularly enjoy it.

13oz draft pour into a tall branded tulip is a beed ruby red body with a cream coloted cap of head.
Aroma is sweet, fruity, and floral.
Taste is sour raspberry mixed with sweet strawberry but not cloying and a balance of bitter hops.
Mouthfeel is medium-heavy with medium carbonationand a dry finish.
Well described as the burgundy of Flanders.

And I'm being generous. First off, for those expecting the opposite, I love this style. The problem is, this beer has nothing to offer. I'm a judge and know my brews quite well, a blind tasting would've *maybe* gotten me in the neighborhood. It looks like muddy water and tastes faintly of wood.