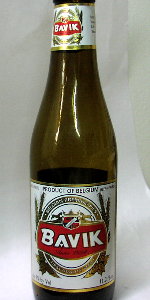 Bavik Super Pils obtains its unique taste and aroma from its exceptional brewing process. Our pilsner has not been diluted, we only use aroma hops, guarantee a long and cold maturation process, and pasteurization is out of the question. Those four elements result in this unique pilsner.

Pours dull yellow gold. A finger of white head sticks around and leaves chunks behind.

Smells grassy with slight hop spice. Unsure of the production date, but I hadn't noticed it in my beer store until this past week.

Good pils taste. Leans malty without much hop spice, but also nothing offensive in terms of off-flavors. 5.2%, so perhaps leaning a little sweet.

Not as crisp as I like them. Slightly too sweet and full, but perhaps that's age.

Not a great pils, but for sure a decent and drinkable one.

Taste is malt and lots of grain with a slight tartness. Clean pilfer taste with a mild bitter finish. Not the best but certainly drinkable.

Drinkable, a solid brew but not outstanding.

selection of the beer-of-the-month club. Poured a pale yellow color with a nice white puffy head that lasted throughout the glass. Smell is slightly sweet with some piney hops detected. Taste is nice and crisp but nothing outstanding. High carbonation gives a mouth fullness that leads helps to make it refreshing. An easy drinker, Best used as an expensive spacer.

Today's beer was the result of a VERY local trade and the combination of 5.2% ABV and 11.2 fluid ounces made it an enticing prospect.

I got a finger of rocky, bone-white head that was falling as quickly as the snow outside. Color was a pale golden-yellow that shined like the sun when contrasted with the slate grey of the sky. The nose had a slightly sweet quality for the style, more lager than pilsener, but not bad. Mouthfeel was thin-to-medium with a lager-like sweetness on the tongue. I was not getting much in the way of hops until the finish, which evinced a slight bit of floral bitterness. It was okay and since the trade was for nothing terribly special, it worked out, but I have had better GER Pils in a CAN.

taste: meh. this is why I don't normally drink beer out of a can. Tinny and dry to the palate, with some notes of grassy hops and light malt.

mouthfeel: prestandard for a pilsner - thin, vanishing instantly on the swallow

drinkability: certainly a nice summer quaffer, but at $7 for a sixer of cans, there's better value out there.

Very soft and clean on the palate. Grainy sweet mouthfeel with a chalky quality. Sweetness, slight hop profile and grains provide for a clean drinking pilsner.

a good pilsner, a bit heavier and more filling than your average Pilsners. A slight step up from Becks

pour is clear and yellow. minimal head with some spit ring and lacing.

mouthfeel is light and slick.

overall this is a decent little run. found on an around the world challenge and given a good once over by yours truly.

On tap at Wursthaus in DTSA (downtown Santa Ana, CA). Maybe this beer is just way better on tap then it is in bottles because I have to disagree with the majority of reviews. I think this is a strong example of the style.

Appearance: Pours a pale, slightly cloudy golden color with a small white head that settles down to a rocky set of islands; decent lacing

Taste: Fairly neutral, almost water-like; some lemony bitterness on the finish along with some phenolic flavors

Drinkability: OK for a quaffer; purchased by mistake and it met my low expectations

Has a nice, fresh, beery aroma, which is its best aspect. Flavor is so mild as to be barely present. What is there is just beer with perhaps a hint of mint. Kind of like a diet beer but with some body. And calories. :)

On tap:
Pours a pale golden, with a nice white top and a fairly significant lacing.

Nose is on point, crackers grain with a light but clean to dry grassy bitter balance.

Taste is actually a little cleaner than I’d like, the Pilsner malt seems cut by a tad. But not too much, I bet the malt and the grassy bitterness. Light feel with moderate carbonation.

A nice beer that slowly got better in my mind. Definitely worth a try.

what i must mention is that this is the first Belgian Beer i've ever seen in cans, which is what led me to buying a six pack to try...
once poured into a tall pilsner glass a fizzy short head appears leaving a very weak lace that trickles down the sides of the glass.... a light yellow colored beer that is very similar to the color of the mass produced mexican beers that are pilsner influenced.

the aroma is light with a slightly harsh citrus tinge to it which i enjoyed greatly..

the flavor though, or lack of, is a bit off putting.. i was expecting more from a Belgian beer. no hop flavor and very little flavor of anything else for that matter. goes down very easy. the carbonation really comes through if rolled around over your tongue, leaving you with an almost "just brushed my teeth" feeling. sounds worse than it actually is..

in the end i found that i would buy this beer again if i was in a situation where i couldn't have bottles and needed to find something drinkable in a can. and for 5.99 a six pack of a beer imported from belgium, you're not overspending.

Straight from the bottle. Aroma is a nice grassy Pilsner smell. Taste follows nose very closely. IMO this is a great German Pilsner and I will be buying more. If you like pilsners, you'll like this one.