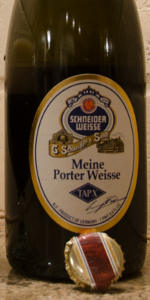 BOTTLE: Purchased at Ambrosetti in Berlin. 750ml format (which is rather uncommon in terms of German beer packaging). Brown glass. Classy oval label. Pry-off crown cap is unbranded, but there's a neck ribbon that runs over it advertising the vintage - 2014 in this case.

7.0% ABV. Weizenbock per the label. London Porter/Weissbier hybrid per the website. 24 IBUs. Brewed with Hercules, Cascade, and Hallertau. 50% wheat, 50% barley.

Served cold into a pilsner glass and allowed to come to temperature over the course of consumption.

As with many of their 750ml format beers, Schneider has included a plastic seal washer on the underside of the crown cap, which should help with carbonation creep to make this cellar well.

HEAD: ~4cm wide. Pale khaki colour. Frothy, somewhat foamy, adequately thick. It's indeed somewhere between a weissiber and a porter, but it didn't exactly get the best of both worlds. Nice consistency, generally speaking. Soft-looking, but not to the extent you'd find in a great weissbier. And it's not as rich and dark a head as those of the best porters. Retention is quite good - ~8 minutes. Leaves no lacing as it recedes.

BODY: Not the robust opaque black of a porter, but rather a diluted cola brown-black almost more in line with a schwarzbier. Nontransparent. I see no yeast within.

It's an odd overall look, but then this is an experimental hybrid. Not unique or special, but generally appealing, sure.

AROMA: Has more dessert-like sweetness than anticipated, leaning heavy on chocolate malt sweetness, cream, and hazelnut. Wheat is there softening things up when I look for it. I don't detect any stout-like roasted barley, or any harsh coffee or anything. Hop presence is quite mild - maybe just floral notes?

Aromatic intensity is above average. Suggests a beer more porter than weissbier, but in no way a weizenbock...the yeasty esters (banana, clove, bubblegum, what have you) just aren't there and the yeast doesn't seem prominent in the build.

TASTE & TEXTURE: Creamy, medium-bodied, soft, smooth, and wet on the palate, in classic porter fashion. And while the wheat helps achieve that softness, it also leavens the beer, robbing the porter of any robust malt backbone. While the chocolate malt/schwarz malt sweetness is nice, and nods towards richer dessert beers, I'm not sure the yeast attenuation is quite right. I want it to either commit to full dessert beer or to stick with the mellow wheat & malt sweetness, but this sits awkwardly somewhere between the two.

Depth of flavour is adequate albeit unimpressive. Flavour duration and intensity are moderate.

I don't think that the porter constituent clashes with the weissbier constituent per se; this doesn't feel as uneven or chaotic as, say, a Firestone Walker blend. There's definite cohesion here, and the flavours do work together to an extent...just not to the extent they need to; they don't harmonize. The sweetness is off, but I can't decide in which direction, the yeast profile awkwardly tries for lager cleanliness with ale attenuation, the hop profile is kind of there but kind of reticent...it's not a simplistic beer or bland or anything, but there's not a unity of flavour and it's missing a clear deliberate focus or direction. Nebulous criticism, but nevertheless honest.

I do like it for what it is; I just find it something of a failed experiment.

Minor note: Carbonation is high, but the softness of the mouthfeel makes that kind of okay.

OVERALL: I always applaud experimentation, and leave it to Schneider to be on the cutting edge. Trying to balance the traditions of two rich brewing cultures in order to make a hybrid that exceeds the sum of its parts, Meine Porter Weisse has to walk a fine line indeed - and unfortunately, it comes up short. It's a spirited effort, though, and the result is a drinkable albeit somewhat uneven and distracted beer with an interesting hodgepodge of constituent flavours. I wouldn't buy it again, but I'm glad to have tried it, and I think it unfair to call it disappointing.

I always hope for greatness from this brewery (and it so often delivers exactly that), but to invoke an American cliche - if you want to hit it out of the park you've got to accept sometimes you're just going to strike out. Or something like that...I've got beer to drink, damn you.

As the tried and true taste of Dunkeweizen runs its course, the fans of dark wheat ales venture into more challenging taste as their palate develops. with the stronger malt, yeast and toasted character elevated, proportions of the beers malty underpinnings exceed that of Dunkel and into the more robust world of Porter.

Somewhat of an ugly duckling, the ale pours with a highly muddled appearance, casting hazy rust tones with light brown, red and purple-ish hues through its thick haze. As a dense and creamy head builds, its rich lather is its saving grace- firmly withstanding the session, lacing the glass with confident concentric rings with each and every sip.

Its highly complex aromas are lead by the common fruit esters of banana, lemon, apple and papaya. Its complementary clove, white pepper and vanilla bean balance rounds out the fruit as nestles nicely in its bready-sweet, toasty and lightly chocolate scent. Heading into first sip, a tangy wine-like acidity strikes the nose along with cashew and mint.

Its taste elevates the sweetness, at least to start- its malty-sweet balance is of fresh baking bread, cake batter and pulled candy. The weave of banana and clove float just above the malt and really come to live in the middle palate. Grapes, toast, chocolate and nuts remain subtle and support the fruit and spice medley to perfection. Its finish of white pepper and mint round out the toasted grain and offer up a smooth, sweet and lightly tangy finish.

Medium bodied, fuller impressions mount as the beer's sweetness lingers on the palate. As its bready texture is slow to release, the beer has a slow and stead procession across the palate- arriving at a malty-dry finish with a pleasant evaporative cooling from minty hops and alcohol warmth.

Porter Weisse is a near-perfect display of what it is to be a wheat ale. The entire range of beer flavor seems to be represented an in equal and balanced fashion. Just shy of the Aventinus, Porter Weisse is a welcome addition to the Schneider family of ale.

First , a big thanks to Herr Weixner and Frau Hecht From Schneider Weisse for directly sending me a bottle of this great beer to taste. I've been anxiously awaiting US distribution of this unique ale since I learned of it in December.

A: Again, the sexy curved TAP X bottle and the elegant packaging and hang tag enhance your anticipation of the beer which is to come. Pours a very dark murky brown with 3 or 4 fingers of creamy, dense mocha head. This is micro-bubble head which retains well and laces nicely as you drink the beer. Lively beer with great bottle conditioned carbonation streaming up from the bottom for the duration.

N: Lovely big yeasty nose hits you as soon as you pop the plastic sealed cap. It's got all you expect from a Schneider Dunkelweizen and the nose is fairly close to that of TAP 6 Unser Aventinus. Big banana and citrus, with a bit of clove and floral notes as well. Only the slightest bit of malty toastiness at the end.

T: Quite Interesing, and really a tale of two cities. Starts off with the big hefe and wheat beer lineage which hits you in a wave, but then pretty rapidly morphs into an English style Porter. Good roasted malts, mild coffee with hints of chocolate and nuttiness, slightly sweet. This is not an extreme American craft style porter with exaggerated coffee or char, but a straightforward and focused English style porter, benefiting from a 50/50 wheat/barley grain bill. Simple, refined quality. Successive sips confirm that one-two punch of hefe and porter; it's quite interesting how they've achieved that with almost seamless integration. A mild Hallertau and Cascade bitterness in the finish.

MF: Really enjoyable, with a creamy mouthfeel and a dry finish. No heat at all. Goes down great and very, very easy drinking. It's really gentle and soft on the palate.

O: I really enjoyed this beer and I think it's quite an interesting and successfully hybridized style. It's very well balanced and there's nothing objectionable about the way the two styles combine. This is not an overly complex or flashy beer, it's clean and straightforward.

This one was a real gem. Schneider is king of the weizens, and here they managed to perfectly blend in a classic English porter, so that elements of both are noticeable and compliment each other. Nice nutty and dark roast grains from the porter on top of a thick, chewy and potent weizen bock. Excellent.

Overall presents a great blending of two styles, the interplay of fruit and roasty flavours is fantastic

A: Dark deer skin brown with a cm amber hue on the edge when held to the light. Topped with 4 fingers of cappuccino beige head with fair retention.


T: Brandy, toffee, toasted porter like notes, a hint of tar, lightly sweet with a sour fruit note like an orange lollipop, light coffee. Oh its complex and great.


O: Found this on in Kunming, China at a hip little bar on a back street. Amazing brew. I understand the name now after trying it, a cross between a porter and weizen in my opinion. My goodness. Find one, though its retired, and try it!