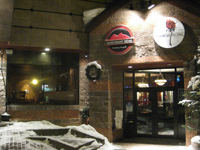 Hit up Happy Hour and you will not be disappointed. I love the 'Uncle Daryls Dunkle" Smooth, great head and aroma, after taste leaves a trace of banana. all that flavor for $2.00 from 4pm to 6pm. Cheers. Also, they offer a great selection of beers such as pale ale, a porter with nitrogen, downtown brown ale, wheat ale. Also a root beer all made in house. A personal experience on more than one occasion as lead me to believe that there beer gos flat and they will serve it till the keg blows. That may be the only negative thing in the entire place.

Stopped in with a large group during a conference in summer 2008. Seating inside consists of stools at the bar, tables near the bar, tables in a raised section overlooking the bar, and outside on the front walk. It was dimly lit inside and yet seemed to be trying the upscale bit. Odd.

Anyway, our group was too large for inside seating, so we were seated outside. Basically, a portion of sidewalk with a tent as covering. As dark came, so did the mosquitoes. Rather unpleasant. The menu was pricey with gourmet offerings. The beers were not too style, lacked interesting character. The food was okay, but he service was sub-par (perhaps the staff was driven away by the mosquitoes?). Glad I wasn't footing the bill on this one...I'll never go back.

My wife and I read about the "Best Happy Hour in Steamboat" in one of the local rags, so we made a point of showing up at "The Hog" promptly at 4 p.m. Beers were $2 and selected appetizers were just a buck. Can't beat that. On that visit and return stops we sampled just about all their beers and were pleasantly surprised. We have stopped in years ago and flat out did not like the beer, but this time all were more than passable. Their finger food was outstanding. Can't report on a meal, but I would expect good things from the kitchen. Others have rated the atmosphere low and I can only guess that it's because it can get very busy and noisy later in the evening. In my world, that's not a bad thing, but some apparently want a nice quiet place to hang. Whatever. I definitely recommend checking it out, especially if you can get there early enough to enjoy happy hour.

Hubby and I were in town for a wedding and decided to leave the reception (which had a free open bar, BTW) to go check out the highly acclaimed Mahogany brews. I was, to say the least, sorry I left a party with free alcohol for what I encountered.

First of all, the two burly gentlemen standing outside the door informed me that we would have to pay a $5 cover per person for the bluegrass band that was playing on this particular evening. No problem, I love music. Upon crossing the threshold of the establishment, said bluegrass band stopped playing music. No problem, the band's probably just taking a breather.
Total: $10

Second, when I approached the bar and asked the bartender to tell me about their beers, I was handed without a word the written list of brews that sits on each section of the bar. First tip, kids: If you claim to craft your own beer and sell it such divine liquid to the public I would like to hear from your employee's lips a bit about them.
But I carried on and we ordered their wheat and a stout. So unmemorable I could cry just trying to recall the distinct flavors of each one. Perhaps I was too distracted by the obvious disinterest of the waitstaff with my beer order, or maybe it was that I saw more shots of vodka and lowballs of whiskey sours passing my eyeshot than should be allowed in a, ahem... brewery, or maybe it was the pretentious air that was slowly squeezing the life from me. Second tip, kids: Breweries, especially ones with actual brew kettles behind the bar, should be primarily interested in serving beer.
Total: $20

Third, remember that awesome band I paid $10 to hear? Never heard a note. In the 45 minutes it took me to order, drink and pay for my beer, I never even so much as saw them, let alone heard them. So upon leaving, I asked the rather large but nice gentlemen at the door if I could have my $10 cover back. He gives me a lame excuse about how the wrist bands he has left over have to match the money at the end of the night. No problem, I'm not attached to my purple band. So we tore off the wrist bands and gave them back, but he would only refund me $5 bucks. Third tip, kids: Treat your patrons right, and give 'em what they paid for or their money back.
Total: $15

Not ever having to go back: priceless.

First off, you will not see this place while driving through. It is hidden behind a small buisness and decortive sidewalk trees.

Patio is the best seat during fair weather. Inside the place is too upscale for a brewpub. Servers no way more about exotic drinks than the house brews.

Brews: The list of brews pander to the light beer drinkers with 2 pale ales and no IPA. The first pale was alright and very drinkable, but the second was so bad I sent it back, which I have never actually done at any of the 97 brewpubs I have been to.

Food: Higher end grub not your usual pub fare. Both of the dishes my friend and I got were great.

Service: Not bad overall, could have been better considering how empty the place was.

No matter what I won't be back because of the quality and price.
I can get good food at many places.

Not a bad brew in the sampler. The most popular beer was the one I liked least. The brown ale on nitro was by far the best and the one I remember. I guess the only detraction was the $8 for the sampler, which was about $1 a small glass. Way over priced, but it is a high class ski resort and we were thirsty. Service was good, was kinda dead for the pre-season Sunday night we were there. Kitchen closed so we couldn't get food. So so experience. The place has potential though. In will try again in the future. Curious about the food. (let's hear it for putting Root Beer in the sampler!)

Nice place. Seemed like it might be a little hoity toity during regular hours, but I showed up late night for a "Dance Grass" band. Didn't try any food. Beers were ok. They had a decent Dunkel Weizen and a decent IPA. The IPA was more of an English IPA than American. They had a beer called Alpenglow that was a good drinking beer. Prices seemed reasonable.

Our bartenders were very attentive, but the one thing I don't like about this place is that it doesn't open until 5 PM. No afternoon beers to be had here. Definitely worth a visit, but if it were here in Denver, I probably wouldn't go again.

My wife and I visited Mahogany Ridge in March of 2006 during a ski trip to Steamboat Springs. As a point of reference, I've been to around 170 micro breweries in North America.

Located in the downtown area of Steamboat, Mahogany appears a bit upscale for a sleepy old mining ski town. It's an easy free public bus ride from the slopes and the area is certainly worth visiting if you're in town for a ski trip.

We lucked out and made it for happy hour. $1 tapas appetizers which qualified as a "tasting" as well as a discount on drinks. The bar area is nice with some long communal tables if you like to mix with others. In retrospect, Mahogany may be more focused on food and wine than beer. For lack of a better term, the beer was terrible.

I started with an ESB that lacked any flavor. As a bitter Pac NW hop fan, I can appreciate a solid English bitter. This one was uninspiring with no profile to speak of. My wife, a wheat fan, ordered the wheat that turned out to be filtered. I've always felt wheat is best done unfiltered. If anything, if simply looks better. She thought it was ok which may be attributed to her not having a beer in 4 months because of a diet she's on. My next selection, a pale ale, was where it totally went downhill. At first I thought they poured me a domestic macro light. No aroma, no flavor, no color - what gives? In all my brewpub travels, this may have been the only time I struggled to finish a beer.

The best part of this trip was the tab for three "beers" and two appetizers came to $9 which included the tip.

In a great brewing state like Colorado, it makes me wonder how Mahogany can get by brewing such pedestrian beers. It's a shame they can't put as much attention on the brewing as they do on the food, atmosphere, and wine list.