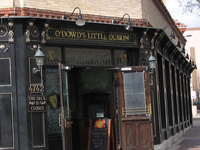 Dressy Irish pub on one of the outskirt corners of the Plaza district in Kansas City. Inside is all wood paneling, with quite a few tables. Late at night, the tables get pushed off to the side, and the space turns into a dance hall. Upstairs is a great patio complete with overhead heaters, extending the drinking season up here by a few months. A separate bar is available for patrons to visit here, along with servers taking orders and delivering food and drinks. Selection beer wise is small, focused on big name regionals and Boulevard with perhaps a local tap or two. Food is good, with plenty of Irish comfort food to select between, including a delightful plate of Corned Beef Hash. It's a quality stop for someone seeking a rooftop patio drink, a clean dance floor, or comforting Irish food.

Really fun place to have drinks with friends! Decent little beer selection and tasty food too!

Food is good, atmosphere is nice, and service is attentive. We love the happy hour, but the beer selection is just average. Nothing fantastic as far as rare beers go, but there are some good ones to choose from. The food is always delicious and there are many items to choose from. When we go during happy hour, we usually get many different items and do not leave hungry, but are happy with the amount we spend. I like that there is a rooftop area and many indoor areas. They are also kind to children and accommodating.

This is an Irish bar / restaurant in the greater K.C. area. My family held a family reunion in the back room of the restaurant.

The atmosphere of the place was made up to look like an Irish pub. Lots of dark wood everywhere and it was really nice looking. Great looking bar with real authentic looking tap handles. The outside looked like any old bar you'd find in a strip mall but the inside was really done nicely. Wooden molding on the furniture.

We had a devoted waitress for our party so service was great. She brought me beer after beer and was there the entire time to take our orders and fill our beverages. No real complaints.

The beer selection was fine, there were several draft beer and since we were in KC, Boulevard was on the top of list. They had a couple of Irish beers, Smithwicks and Guinness on draft as well as a couple fo Boulevard. When I inquired about the Smokestack beers they had those as well.

Food was good, more irish fair. Fish and chips, bangers and mash, so on and so on. It was good and the quality of food was really nice. The whole place is on the expensive side. I'm not sure I would go back unless I had a reason to, like another party or family gathering. Overall it is a nice place though.

I'm really reviewing this place just because I don't think it belongs in this database. This is really just a commercial Irish bar, not a beer bar. Its located on the Plaza, so its nice to be able to go in and get a pint of Guinness or Smithwicks when you've been out shopping but that's really about all. The bar service is excellent, prompt and they get things right. Their selection is pretty bad. It's all major brand imports and a couple large domestics plus 2 Boulevard taps. Their bottles are all macros. O'Dowds does have good food. The worst part about it is its pricey. Its only the plaza which makes things more expensive but your going to pay about 6.50 a pint and you could go up the street about 2 miles and go to Waldo and get a pint for about 3. It's a pretty easy choice in my mind

I visited here twice on Wednesday, 12/13/06. The first sojourn started just before noon, as I hunted for a bar that suited my tastes whilst wandering blindly about the Plaza. When I saw an Irish pub, I felt that I would get my money's worth. The second visit was later in the night, around ten PM, with a large group.

The bar's decor was as Irish as they could import, with lots of dark wood, stout signs, and wooden tables. There was also a lot of tasteful Christmas decor about - the red and green complimented the dark wood well. In terms of clientele, the bar seemed to fill with a very mature after-work crowd, with many patrons wearing fine clothes.

The beers I had, which were a few pints of Beamish (they have a number of hoarded kegs!) and Murphy's, were nothing to complain about. They also had a number of Boulevard beers on tap (like everywhere else in KC), and their own house Irish Red, brewed by a local.

Service was great when no one was there and I sat at the bar, but quite poor when the bar was filled. There were only two very busy 'tenders, and not nearly enough servers. Still, the best time at a bar is when it's not busy and smoky - the perfect time to enjoy your beer.

The food was better than average, and I had my first Irish corned beef sandwich there. It went well with the Beamish.

Overall, a fun place. The final bonus was that they had a live Irish band playing, which gladly accepted my request for "The Fields of Atheny."

Yet another corner location! Is it so bad to do business in the middle of the block? No matter, just another non sequitur being mumbled under my breath as I went into this establishment.

Just from the outside, it was obvious that they wanted to be evocative of a Dublin bar. As I entered the vestibule, the maitre d station was just inside the door with the all-wood bar off to a hard left. I have to say, the chairs were so low as to make me feel like a little kid, waving my arms to be seen, yelling to be heard and needing a booster seat or a phone book to sit on. OK, not quite that drastic, but it was unpleasant and you get the idea.

Headed aft, there was a nice mosaic inlay along the floor next to the bar, then further aft was a faux library with a lute and an Irish fiddle on display, as well as a faux fireplace. Their restaurant seating, including booths and tables, was aft of the maitre d station on the right-hand side and in the center of the space. Be sure to check out the spent-bottle chandeliers, the heavy rope work, and the spent barrels. They had an outdoor deck upstairs with its own enclosed bar and lots of high tables and chairs.

The beer selection was only so-so, but the draft Boulevards kept me happy.

ODowds Little Dublin is another fine craft beer establishment that I was fortunate enough to visit as part of a well planned business trip through Kansas City. Classic Irish Pub dark wood layout; it also has an upper deck that I understand is a real attraction in the summer season. They offer a great line up of all the classic Irish stouts on draught (and whiskies) and have their own Irish red that I understand is contracted from KCs 75th Street Brewery. The service was great; I stopped by a day or so before St. Pats and the Barkeep was telling me that they opened at 10am for an 18 hour marathon. I enjoyed classic Irish plates both times I had time to stay for a meal; an interesting departure from standard pub menus. I highly recommend stopping in if you have the opportunity.

As far as I can tell this is the best bar in the Country Club Plaza. With that said, it is far from a great beer bar.

O'Dowd's Little Dublin has an easy to find corner location; it is across the street from California Pizza on the western end of the Plaza.

Ive never been to Ireland so I cant say how authentic the appearance is inside. IMO, the décor is quite pleasant as there are tons of old, worn wood tables and booths (the floor is wooden too) with a few Irish themed knickknacks and beer memorabilia. The smallish bar is located immediately as you walk it, the bar is the center of the restaurant. Booths and tables are scattered about, some a tucked away (it is nice and cozy). There is some seating upstairs, outside but Ive never been up there.

Ive been here three or four times, I found the food a bit salty. The menu consists of Irish fair and vaguely Irish foods. I dont remember anything sticking out, positively. This is not to say the food is bad but it really isnt that special, IMO.

As for the beer, I think there is about 10 beers on-tap, maybe a few more. Boulevard Wheat & Pale Ale, Smithwicks, Guinness, Harp, Strongbow, and a few more mediocre imports and a couple other duds. I dont know about the bottle selection.

Overall, I am not a big fan of trendy Irish Pubs and ODowds does little to change my mind. With that said, based on its location sometimes there is a need to have a beer after a long day of shopping with the ol lady. IMO, this joint isnt worth seeking out but there is no reason to avoid it if you find yourself in the Plaza. [It must be noted that Westport is only a few miles away, McCoys brewpub is located there along with many more bars]

Located in a busy area of KC near other bars/clubs, O'dowd's was packed on a late Thursday night. Lighting was low and old looking wooden tables were sitting on top of a wooden floor in the section we sat in. The bar area looked about the same. It would have been a comfortable atmosphere if it wasn't for the overly-loud cover band slaughtering Dave Matthews and Tom Petty tunes in the middle of an Irish pub setting.

On tap were Guinness, Beamish, New Castle, local Boulevard, and a few others that weren't noteworthy.

Food wasn't being served at 10:30pm when we dropped by. The staff got the job done, doing a good job for how busy they were. I'd like to give this place another try during the day.