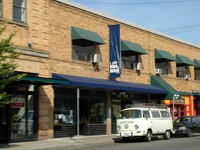 View: Place Reviews
Recent ratings and reviews.
4.75 by tylerstravis from Colorado on Jun 05, 2014

The Blue Monk has a very authentic atmosphere. Updated and lightly modernized over older blues roots, it has a comfortable, lived in feel of a place more focused on function than form. It's heart and soul is the live blues, jazz, and funk music served nightly.

But the selection on tap is also excellent. I was pleasantly surprised at the number of Belgian microbrews available, with over ten varieties of tripels and several imperial ipas, with at least one kriek and several lambics and sours. They seemed to favor the Belgian styles over American standards like stouts and lagers, and I even saw "strong ales" mentioned on their extensive menu. Very brave and an above average selection featuring very few "average American" beers. Stella Artois was their PBR equivalent.

So a great place to sample some new beer styles while sampling some great music from live bands.

Have been several times and can't wait to go back. There are 10-11 on tap and all are fairly unusual and hard to find elsewhere. The bottle selection is also pretty uncommon and prices seem pretty reasonable. We try many beers each time we visit and the owner always goes out of his way to make recommendations and get our feedback.

There are two levels. Lower level used to have a stage and live jazz but the owner found that this wasn't profitable. It now has pool tables.

Food was average but different enough from the usual pub fare.

I may be a bit biased being a jazzoid, but this place was like dining in the inside of my head. The multi-tone blue theme, geometric art, excellent background music, low lighting and old, overweight men (regulars) waiting at the bar for the show to start really create an effect I wouldn't have expected in Portland. New York or Paris maybe, but this is cool.

I'd been meaning to get down here to see a live show, which is a frequent occurrence, and one of the few places in PDX to get live jazz. Tonight we had other musical engagements, so we decided to stop for some dinner and beers. We started with a round of the half & half, a Guinness and 90 minute IPA style black & tan. I'd heard some hype around the beer, and it was terrific. But there were plenty of other beers to order, both on tap (around 15) and lots of bottled beers and a fairly full bar. There were several items on tap that seemed to be exclusive to this venue, including the DFH 90.

The food was excellent. Everything we had, the bread, steamed clams, pasta, entrees were all prepared well and were of great quality. The menu is more of an italian style with plenty of Veggie options, being PDX and all.

The staff was very courteous, truthful about the menu and beers, and generally seemed to enjoy the place.

One of the things I liked especially about the Blue Monk was the break from a poor relationship between beer and jazz. Most people will probably think of Kenny G and white wine - but they're idiots. I think among jazz fans, the appropriate atmospheric drink would be liquor, ranging from a mixed drink to a single malt. While I don't fault these people, I think jazz and beer are excellent together. Many of my best beers have been made while listening to the greats. And being Portland, where else can you mesh the two?