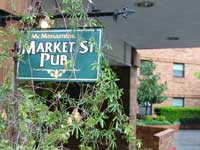 The monsoonal rains having finally stopped (wettest June 2nd on record), time to get out and walk to 'new' lunch spot! When I worked on this end of downtown (about 9 years back ~ geez!), this tucked-away McM's was a favorite, albeit occasional, lunch or HH locale; has been a couple years since I've been in the neighborhood (despite still working in downtown).

As likable as any of the non-historic properties in The Empire feel-wise: pub booths and plush carpet, a stretching copper bar, plenty of windows facing a verdant courtyard. The surrounding brick buildings (a ca. 1980's apartment cluster) and a surround of waving bamboo sort of insulate this one from the street. Crowd at lunch seems like a mix of faculty and students from nearby Portland State University, maybe a few museum-goers, tourists, too. Music is a cool mix of jazz, blues, and rockin' old-school country.

The beers here are brewed by a 'sister' McM's, the Fulton Pub down in John's Landing. The lineup is: 6 standards (Hammerhead, Terminator, Ruby, etc.) a couple seasonals (Workingman's Red and an unnamed Pilsner), a nitro (vanilla cream ale) and 3 guests (PBR, Coors Light & Deschutes Twilight). The pilsner I tried is decent, the sample of cream ale was too sweet (no surprise). A service goof resulted in a bonus 'Rubinator' - score!

My 'go-to' Captain Neon burger (a litmus test at each McM I visit) was prepared nicely, tots crisped perfectly. The menu is limited mostly to the standard pub fare: sandwiches, burgers, salads, with a pasta or fish & chips thrown in. Service was a plus: fast enough, friendly enough, a little aloof - helps to sit at the bar, maybe? (Did I mention 'free' pint?)

A fine little 'off-the-radar' McMenamins; not a destination, per se, but not a bad place to spend an hour or so.

Good place to grab a brew after class or a break from studying (If you attend PSU). Nice atmosphere, very laid back. Decent beers a good brewery that offers various flavors and kinds...but not great.
Service was great! Friendly bartenders recommended beers and what to expect, whatever your looking for. Selection was alright overall. As far as food is concerned I did not have any but the menu looked traditional for most pubs and taverns.
McMenamins is a chain around the area and aims to accommodate. Good but not great beers...but hell, your in Portland and beers are everywhere.

Every 5,000 miles I've got to take the VW in for service. The dealership gives light rail tickets and this McMenamins is one of the craft beer places you can get to by rail. This makes it a great place to have lunch after checking out books at Powells.

It is like a number of the alternative McMenamins. Those built into modern buildings. The rest room has neat art and the signs give visual interest. The weekly food special is the first thing I check out and then if I don't want something there it's the Neon Burger and fries with a good hoppy beer. Finished by a desert of Terminator.

Staff seem eager to please and everything comes out on the better side of average pub food.

Situated on the ground floor of a large brick apartment building right along the streetcar route, it seems an unusual spot for a pub, but the outside courtyard is pleasant and the interior is homey and very comfortable. It's an L-shaped room, with entrances on either end. High-backed booths wrap around the bar and almost each one has a window to look out of. Standard McMenamins artwork abounds with a lot of strange European street signs, puzzling but quite pleasant. The painted wooden ovals suspended over a couple of the booths are really nice. Right next to Portland State University's campus, so clientele and staff are mostly students. I have only been here during the afternoon, and it is very peaceful; I don't know if the pub takes on typical college-bar attributes at nighttime. Probably not. Usual range of McMenamins beers (sourced from, I believe, Edgefield and Crystal breweries), maybe a couple more offerings than some other branches. Three guest micros as opposed to the usual one or two. Booze, too, which not all McM pubs offer. Food is pretty tasty and service is leisurely but very friendly. Perhaps not a destination for out-of-towners, unless you are strolling the idyllic South Park blocks, or visiting the Portland Art Museum and crave a pint after soaking up all that cultcha.