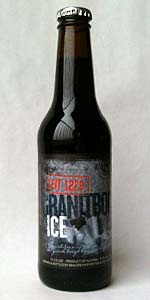 Bottle from Alpenhaus Deli. Murky brown pour, small creamy head, last for a while. Pungent, sweet malty aroma, not out of place, reminiscent of a doppelbock. Taste is also sweet, some bitterness towards the back, and plenty of burn. Instantly warming, dries out a bit at the finish. Boy, I’ve missed this style. What memories.

Bottled in 2011 so a little age to this.Poured into a snifter a deep walnut brown no head to speak of.Aromas of roasted nuts,caramel, and a sour frutiness,almost like a fruitcake with a light sourness added.Flavors are nutty and cake-like with a tinge of rum,again a lingering light sourness is there.Mellow in the mouth...almost to mellow but it's a nice sipping nightcap.

It pours a very dark brown, murky brown, with an inch of tannish foam. Superb lacing.

Lots of brown sugar, caramel malt, and some grain in the nose. Oh, I do believe that I am sensing some Port like aromas. Hell, yes I do.

Yikes, the taste almost reaches the heights of the super good and style specific smells.

Caramel malt and brown sugar sweet notes dominate but fall far below the "this is too sweet" category. There are definitely some chocolate, perhaps of the semi sweet kind going on that add just a touch of bitterness. The Port I mentioned in the smell is there but a bit muted.

Close to full bodied without being cloying.

It might just be me but I find this Eisbock a rare and wonderful treat. Try it if you see it. PROST!

Yeah baby... on tap at Max's during their German beer fest.

The beer pours a fairly dark hazy brown color with light red highlights. Head retention is pretty good, though the lacing is light. The beer has something of a viscuous look to it, which I guess is no surprise. The nose is incredibly complex in this fine beer, as I pick up dark fruits, dry sherry, brown sugar, and even a hint of sour. The flavor profile replicates the nose, with the light sour completely drying out the modest sweetness in this beer. The sherry, vanilla and a hint of nuttiness seem prominent in this well made, complex beer. Interestingly, while there's some sour in the finish, at the very end I get some sweetness as well. So much going on in this beer. Mouthfeel is fairly full, and while it's apparent the abv. is up there, there's no sense of heat in the finish, though the beer wears on you after a bit. It's just so rich and viscuous...

An amazing beer, and one that makes me understand why a brewery would make an eisbock. The concentration of flavor in this beer is flat out amazing.

Appearance: With a head about an inch in height but thins out quick. Underneath is a dark mahogany with amber hues.

Taste: Very smooth mouthfeel. At the start it's a tidal wave of sweetness huge malt backbone to this beast. Dark fruits, hops are roasted so very well. Solid notes of figs, alcohol, lots of molasses wow is this sweet.

Notes: Dam this snarling beast has big sharp pointy teeth with a sinister malt backbone. Did I mention this beer is incredibly sweet. Cheers.

I have a bottle brewed in 2013 that seems to have been properly handled. Aroma was dark malts, roast, toffee, bit of licorice. Flavor’s similar to nose, not too sweet, but does have a bit of medicine in the finish.

A malt-lover's dream, Hofstetten's eisbock manages to concentrate many of the flavors found in a darkly sweet and slightly cocoa-influenced bock, resulting in an easily drinkable, though definitely only-for-sipping over the course of an evening, heavy bock beer. Though the price is a bit high at $7 for 11.2oz, this could (and maybe should) be considered an entire evening's worth of drinking, thus resulting in a fairly fair price overall. A great evening and nightcap that I would return to again.

Pours a thin film of burnt tan-colored foam that quickly fades to a thin ring around the perimeter of the glass. Lacing is minimal, just a few dots cling to the sides of the glass. Body is a dark brown to black color, with light bringing out little change except for slight dark brown hues around the edges of the main body. Carbonation not visible through the opaque body.

Aroma of heavy caramel-like sweetness, dried dates and brown figs, raisins and prunes in a heavy sugar syrup, slight toasted nut and toasted hearty bread. There's no ethanol here, though with potentially three years of age, that aspect should have mellowed considerably by now.

Beer is heavy-bodied, with carbonation of low intensity, resulting in a smooth (9/10) and just slightly foamy (1/10) mouthfeel that's perfect for a heavy, high-ethanol beer of such intense sweetness. Ethanol felt lightly as warmth in the nostrils and a light burn on the throat and tongue: ethanol generally well-hidden. Good for the style Closes dry, with heavy stickiness clinging to the palate and lips.

A - Pours with a small head of light tan foam on top of a very dark brown body. The head fades quickly and leaves only traces of lace on the glass.

T - Dark, tart fruit up front with plum, sour cherries, and raisins. Some dark sugar in the middle, caramel, and toffee that becomes more roasty in the finish with dark cherry, molasses, and a bit of licorice.

D - Well, it smells amazing, but the flavor is not at all what I expected. The tartness isn't unpleasant, but it is odd and I'm not sure if it was intentional or not. Overall, it is a good brew, but a more traditional version with more sweetness in the finish would have been better.

A: The beer is very hazy dark brownish red in color and has a light amount of carbonation visible near the sides of the glass (it's too hazy to see through). It poured with just some lacing on the surface and a thin ring of bubbles around the edge of the glass.
S: Aromas of dark fruits—plums, prunes and raisins stand out in particular—are present in the nose. These become stronger as the beer warms up.
T: The taste is similar to the smell and has added notes of caramel malts and brown sugar.
M: It feels medium-bodied on the palate and has a moderate amount of carbonation along with some warming from the alcohol. It's neither sticky nor syrupy.
O: This beer is rather easy to drink compared to other beers in the style because the alcohol is very well hidden from the taste and it's not very malty or full-bodied in nature.

t: More booze than in the nose, perfumed and sharp. The fruit comes across as less sweet and rich and more overripe and kind of vegetal.

o: I wish it tasted as good as it smells.

M: Alcoholy. Thick and chewy for sure.

Poured a brownish body with one finger offwhite head and some lace on top of an aroma that was strong, almost like a sticky sweet smell if that makes sense, barley malt aplenty, yeast pokes out and some dark/sweet fruit. The brew is creamy, smooth, the yeast makes it fluffy on the tongue and easy to pass, with a balance of caramel and toffee sweetness and good malts that border on roasted and some fruit flavors that border sweet fruit and dark fruit but I can't really pinpoint them. There are not really any citric type fruits like orange that sometimes poke out with a good amount of yeast in a beer, but the finish is a little crisp and these bitter citric hops poke out on the finish, overpowering the sweet malts and dryer malts. A very good beer that has a great balance of hearty maltiness and sweetness.

Poured from 330mL bottle into a straight-sided glass.

Appearance: dark brown with a slightly murky appearance. Head poured a finger of dense tan foam. It's kind of intimidating.

Smell: richly malty with a lot of sweetness and dark fruit aromas. There's tobacco, raisin, date and cherry in here. Eisbocks and kvasses have very common themes in their aromas, despite the fact that this beer has ten times the alcohol of a kvass. It's quite good.

Taste: sweet and strong, with lots of bready maltiness. The alcohol is also quite strong toward the end. The rich fruity element from the aroma is much more subdued in the flavor, however; I would like to have tasted more of it.

Mouthfeel: tons of body with a relatively low carbonation, this is still a very smooth and velvety beer. Great.

Overall: aroma is great but I wish the flavor tracked more with the smell. Not quaffable in any conventional sense but a soothing sipper, good on a cold November night.