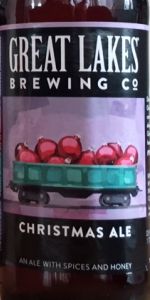 A Yuletide’s worth of holiday spices and sweet honey to keep you a-wassailing all season long.

This is still good, but not as good as I remember it. A few years back this was rare and awaited. Now it fills the big box grocery stores, and I fear the quality has suffered a bit. I used to rave about this and really love the flavor, but now I taste some astringent ginger flavors that I don't recall. The spicy nutmeg honey is still there, but this seems just a tad off and sour vs. the smooth richness and warmth of previous releases. I am willing to think I got a weird batch (or I am having a taste malfunction!) and get another six or try on draft. I will revise if my opinion changes. Can it be different than previous years, or is it just my imagination?

This is a great winter seasonal. Pleasantly spicy, and very drinkable.

This offering from Great Lakes has a fairly high (7.5%) ABV that they try - pretty successfully - to mask with spicy flavors. However, there's a sweetness to this beer that I'm not a fan of, but the overall flavor isn't too bad. There are other, better, Christmas beers out there.

Wow, this beer is a Christmas delight. I opened the bottle to a surprisingly delightful aroma. The smell of Pine, gingerbread and cinnamon punched me right in the schnozz! Pours tenderly at a 50 degree angle and leaves an enticing bold 1/2 inch head. The rush of this beer ran smooth and crashed into my uvula with endless delight. It has a really full and baritone taste and feels more like a bark cider than an Ale. Santa should be proud to drink this and deliver presents. It really packs a punch.

Clear, burnished copper-brown topped by a large beige head that displays impressive persistance and leaves a small to moderate amount of lace in sheets when it eventually departs.

The nose is sweet and spicy and the flavor is malty sweet, accented nicely by honey and by abundant caramel/toffee notes. There's some spiciness (especially cinnamon), but it's not overdone.

The finish contains a moderate amount of bitterness and a trace of alcohol. The mouthfeel is exemplary; full and rich, very creamy. Mouthfilling with some mouthcoating as well. Drinkability is high.

Great Lakes Christmas Ale is my first beer from the best brewery in my home state of Ohio and my former residence (3 years) of Cleveland. I'm very impressed. I expected a good, solid Christmas beer and those expectations were met and exceeded by a long shot. I only got a single this year, but you can bet that I'll be getting more of this fine seasonal during my future trips home for the holidays. I would have no trouble at all drinking Christmas Ale year-round.

The very beer that took my craft virginity about a year ago, I was used to the oh so dull flavors of college piss water when I went to a friends house for New Years and unwittingly picked up a bottle that would end my tragic relationship with macrobreweries. Poured into a glass rimmed with cinnamon sugar, this brew knocked my socks off! Strong cinnamon and ginger flavors are potent, but entirely pleasant and slowly dissipate into a dry aftertaste. Surprised my parents with this on Christmas Day, and it went perfectly with the holiday meal. Highly recommend making this a Christmas tradition!

Now this is what Christmas Ae should taste like....beautifull work with the spicing....cinamin and ginger on the nose along with almost a pumkin pie like smell.....copper in color...super clean and clear looking (and this is an ale?)...Is medium bodied...a tich of sweetness, but not overdone...at first it felt like a "bock" in the mouth and I guess it still does...some sweet maltiness, and that great spice flavor..that pumkin pie subtle flavor is there on the taste buds too...I've had spice beers that went too far...this is about perfect...what a treat...I love this Brewery...One of my top 2 along with Stone.

*.I rate the drinkability high for a seasonal sipping beer....not for as if you'd want to drink 12 of these in a sitting...rather if you gave me my choice of several holiday beers I'd rather drink this one than most..

Got a pint of this on tap at Becky's, a pub on East 18th Street near the CSU campus where I go to grad school. To celebrate our last day of classes on Wednesday, some of my classmates and myself went to Becky's for lunch and drinks between classes. First time I ever went to class with an alcohol buzz, and it wasn't intentional either. This is perhaps even slighly better on tap then out of the bottle. Mine had a nice foamy head about an inch thick before settling. Aromas of cinammon, ginger, a bit of hops, nutmeg, and honey are all present. This beer has a bitter yet sweet taste with flavors of malt, hops, cinnamon, a dash of honey, perhaps some caramel, and some other spices. Extremely well balanced taste. Has a nice creamy and crisp mouthfeel with light to moderate carbonation. Quite easy to drink indeed. A kick ass beer. Get some before it is gone until next year!

Spice flavors are there but it still tastes like a beer with spices not a spice bomb. You feel the alcohol warmth but in a good way.

A great Holiday beer. I can see why it doesn't last on the shelves.

It is Christmas in your mouth

pours out a very hazy copper colour. off white head and nice lace. aroma of piney and spucey hops, caramel maltiness and bits of chocolate candy. upon tasting... very nice sweet toffee, caramel, cocoa and maltiness...subtle spicy notes of cinnamon and maybe nutmeg...anise, molasses and black licorice, too. the alcohol comes across as peppery and there is piney hop bite to top it all off. the more sips i have of this the more impressed at the balance and delicate interplay the flavours have. the mouthfeel is full and smooth. full sticky sweet body. this is one amazing holiday offering. awesome!

brewed with cinnamon, ginger and honey.

cheers to zap and bighuge for getting this sensational seasonal into my hands!

Had this on tap at brazenhead, in an imperial 20 oz pint.

Pours a nice crystal and bubbly copper color with a thin layer of off white head. Smell is of strong cinnamon and some ginger bread, as well as a thin amount of honey. Taste is very sweet at first then then gingerbread kind of kicks in, very limited bittering. Mouthfeeling is nice and light.

I've revisited this brew after my initial tasting left me unappreciative. I'm not sure if I had a bad batch that year or if I simply hadn't yet evolved into as much an appreciator of diversity in beer; but either way I badly misjudged this exceptional brew.

I like this beer so much that I intend on sending it to a few out of state friends for the holiday; a stark contrast to my original rating of this beer (which was a D+).

The beer is a deep mahogony color with a cap of creamy head that retains well and leaves some delicate lacing along the side of the glass.

The nose is strong ginger and cinnamon, an underlying sweet malt presence makes itself known as well.

The hops, though a bit overpowered olfactoraly, are very much present in the taste. The initial taste the tongue picks up is that of a piney hop which is soon balanced by a sweet malt; the ginger and cinnamon are picked up in the final wash as the beer goes down the throat and lingers behind a bit.

This is every bit the excellent beer that so many have told me it was. I am thankful that I was persueded to give this a second go.