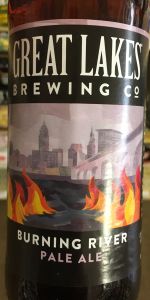 Notes: A toast to the Cuyahoga River Fire! For rekindling an appreciation of the Great Lakes region’s natural resources (like the malt and hops illuminating this fresh Pale Ale). Crisp and bright, with refreshing flickers of citrus and pine that ignite the senses (not our local waterways).
View: Beers | Place Reviews
Reviews: 1,052 | Ratings: 3,309 | Log in to view all ratings and sort
Reviews by jnjander:

Some of us are old enough (barely) to remember that fateful summer day in '69 when the Cuyahoga River caught fire. Cleveland has really come a long way since then. It's a great town!

Not quite clear orange-amber with fine carbonation and a firm, French vanilla colored lid that has good staying power and leaves abundant lace. The aroma is bright and hoppy, smelling primarily of lemon and grapefruit zest. The flavor is well-hopped with a lovely bitterness. Again, grapefruit peel (Cascade?) is dominant.

Burning River isn't overly complex, but it's a more than solid, straightforward, high-quality pale ale. The finish is austere, with more than a hint of dryness. The mouthfeel is medium for the style. I could drink this beer all day and all night.

A couple of thoughts. GLBC seems to be incapable of brewing anything but outstanding beer across a wide range of styles. After sampling three of their offerings, I'm convinced that they have absolutely nailed down head/lace and carbonation/mouthfeel. Lastly, this bottle had a 'best by' date of Sept. 18, '03, a full 3 months before I purchased it and 3+ months before this review. I detected no problems whatsoever.

Poured into a glass.

A - Orange-gold. One finger head dissipates quickly but good retention throughout. Nice lacing.

T - Begins with sweet malt and fruit. Ends in a bit grapefruit with minor pine notes. Dry, with a pleasant light bitterness.

O - This is a good one for initiates in the world of pale ales.

Clear, copper-colored body capped with a thick, frothy head. Malty nose with some mild fruitiness to the aroma. Mild roasted grain and caramel flavor; excellent hop bitterness balancing things out. Medium body; crisp with a gentle sweetness at the finish.

A delightful pale ale, highlighting clean taste with a crisp hop bitterness. Well-balanced and quite drinkable.

The best beer I've ever had!

Served on tap in a pint glass.

Appearance: Darker amber with a thin white head. Heavy lacing on the glass.

Smell: Light hops with a hint of cloves and citrus.

L: Brilliant gold to amber under a 1” clingy white foam cap.
S: Grassy, grain, light malt, not a lot of hops, smells like the inside of a malt house as the steep tanks empty into the kiln.
T: No caramel but a light malt sweetness, fresh grain, light fruit, citrus.
F: Very creamy medium light to medium body, medium carbonation, smooth, dry finish
O: A well made and easy to drink American pale ale.

GLBC makes some of my favorite beers of all time and I suspect this one should be pretty okay as well. I've seen it hundreds of times yet never bought it due to the fact I could never find it in a single bottle. But I finally did at a meager $1.69. Sidenote, if you notice some typos and out of place words, I bought a new phone and am still trying to get it to recognize my unique way of typing heh. Lets do it.

Look - From the twelve ounce bottle hare poured into a pint glass. This brew pours a murky amber color with a finger and a half of off white head that leaves some immediate stick as it slowly dies down into the swill. Carbonation appears to be nearly dead...old bottle perhaps? Nope, good till next month.

Smell - The noise is rather buttery without a whole lot of hop presence to speak of. Virtually all buttered bread like if that makes any sense. Never picked that up in a beer until now. Doesn't smell bad but it is quite underwhelming.

Taste - The flavor profile turns up a bit. The hops are quite earthy with the apparent buttered bread aspect still retaining for the long haul of things. There is a noticeable juiciness from the cascade hops that sticks around for a long long year, again followed by some more earthy, but not oniony nor garlicky hops.

Feel - The body is extraordinarily clean for a beer like this though it does retain a bit of depth. Clean with a touch of creamy aspects and a bit of a sprite like flavor coming through as it sits in the mouth. Swallows with a low bitterness.

Overall - Not exactly what was expecting and certainly unique for the style. Not great but certainly not bad. Hops weren't as pronounced as you'd think but what was there was fairly tasty. Easy drinker but I wouldn't buy it again since this isn't my preferred flavor profile. Try it for yourself and come to your own conclusions

One of my favorite "everyday" beers. Can drink this all year round.

Pours a cloudy golden color with a very minimal head that soon disappears into nothing.
Smells of orange, pine, herbal hops
Taste is a creamy herbal hop up front followed by a sweet malt, finishing dry and semi bitter.
Mouthfeel: Moderately thick, this is a creamier pale ale by far
Overall: Excellent, very easy drinking

Deep orange/gold beer with an off white head that leaves a fine curtain of lacing behind. The aroma is lightly sweet with a hint of peach, flowers, yeast and a hop spiciness. The taste is lightly sweet as well with a grass and melon taste the ends with a deceptive bitterness. This is a nice balanced and pleasant beer.

Poured into a Pilsner style glass (cause I felt like it.... And had nothing else clean)

Smell: orange and hops. Not too overpowering but nice enough to remind you it's a pale.

Mouthfeel: creamier than one would expect from a pale ale, but that has to do with the malt balance.

Another beautiful beer from Great Lakes. These guys really know what they're doing.

Link to my video review of this beer:
https://www.youtube.com/watch?v=bVu9Swk2Fuo

T: A sharp taste, a nice hops finish though.

F: Sharp on the front of the tongue. Heavy carbonation feel.

O: Would have it again, wouldn't mind for a session beer. But wouldn't be my first choice.

nose is excellent with toasty malt and dried fruits. then real nice grape and pine notes.

really nice mouth feel that renders deep malt complexities of sweetness. then the hops take their turn over the palate and deliver an oily pine bite that really makes the flavors pop.

This is a very nicely put together pale ale.

One of the best pale ales around, second only to Alpha King in my book.

A-Pours a light amber with a generous, foamy white head.

T-A great balance. Nice malt flavor throughout, just enough hop presence to make the beer interesting, not so much that it's an IPA in disguise. Nice crisp finish.

M-Nice and light on the tongue, moderate carbonation.

D-An excellent session beer. Flavorful enough to be worth drinking, light enough to keep you out of trouble.

A - Bright copper orange with a fluffy white head with nice lacing.

T - Chewy malt middle mixes very well with the hop combination in this beer. One of the best balanced examples of a true APA and not an ipa light.

D - Superbly sessionable pale ale that I come back to time after time.

bugbear from District of Columbia

S: Mild grapefruit and pine with a little biscuity malt.

T: A little pungent grapefruit up front. Backed up with just a hint of pine, primarily in the finish really. Dry biscuits for the malt in the middle. A little bitter and dry in the finish.

O: Not a bad APA. This one's a little old so I gave it a little leeway on the scores. Nice and tasty and easy drinking though.

Bottle poured into a snifter... Realized the best by date was Oct 8... Oops

A: Amber and clear nice head and lacing

O: definitely my favorite APA. A must try for the style

Burning River from Great Lakes Brewing Co.
Beer rating: 89 out of 100 with 3309 ratings