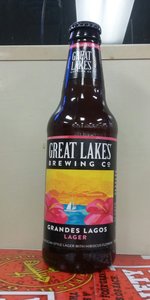 I picked up a bottle of Grandes Lagos Mexican Lager last week for $1.69 at The Lager Mill. I'm in the mood for something on the lighter side today and I thought I would give this one a chance, so lets see how it goes. 2017 Vintage. Poured from a brown 12oz bottle into a imperial pint glass.

A- The label looks nice, it's got a nice design that goes well with the beer and it's a little eye catching. It poured an amber red color that takes on more of a lighter hue when held to the light and it had a finger and a half of slightly creamy off white and very like pink head that died down to a thin ring that eventually faded away. This is a good looking beer, the hibiscus, really changes the color.

S- The aroma starts off with a slightly higher amount of sweetness with the hibiscus being the first to show up and it's the aroma that sticks out the most in this beer while imparting a typical floral hibiscus aroma followed by some fruitiness. Up next comes a little bit of sweet and creamy aroma that goes into the malts which impart some grainy, bready, pale malts, with a little bit of an adjunct lager like aroma. This beer has a pretty nice aroma, but it's a little on the sweet side.

T- The taste seems to be similar to the aroma, but with the malts showing up more this time and it's starts off with a higher amount of medium sweetness with the hibiscus still being the first to show up and it imparts all the same aspects, but it's a good amount a lighter than it was in the aroma and it;s followed by a little more of those fruity aspects. Up next comes a nice creamy flavor that goes into the malts which impart all the same aspects that they did in the aroma and they showed up a little more this time. On the finish there's pretty much not bitterness with some sweetness taking it's place and it had a malty aftertaste with a little bit of hibiscus. This is a pretty nice tasting beer, it's well balanced and it's just as advertised.

M- Very smooth, a little refreshing, crisp, pretty creamy, on the lighter side of being medium bodied with a medium amount of carbonation. The mouthfeel is pretty nice, I don't expect the creaminess from a lager, but it worked well with this beer.

Overall I thought this was a pretty nice beer and it's a nice example of the style, it had all the aspects that I was looking for and the balanced seemed to be just about where it needed to be. This beer had nice drinkability, I could drink a couple of them when it's warm out. What I like the most about this beer is that it is just as advertised, all the aspects show up. What I like the least about this beer is the little extra sweetness, it could be toned down a little. I would buy this beer again when i'm in the mood for a unique lager and I would recommend it to anyone looking for the same. All in all I liked this beer, it's not something I would go out of the way for, but it delivers just what it claims to. It's not a favorite Great Lakes beer and it's a nice example of the style. Nice job guys, this is a tasty and unique lager.

Poured out of a 12 oz. bottle into one of my pokal glasses, this beer is a clear, dark amber copper color with a just ever so slightly pink head that makes quite the fizzing sound when first poured. head is initially well over an inch thick when first poured and settles to a good surface layer of foam along with a thick ring lining the inside of the glass and decent lacing. Aromas of somewhat toasted caramel malts and certainly some hibiscus along with some citrus and berry notes as well. Has a toasted, bready, caramel malt sweet flavor along with hibiscus sweetness and tartness along with an herbal, citrus hop flavor with a slight bitterness. Good mix of flavors here. Has a very crisp, slightly prickly, yet smooth, light to medium bodied mouthfeel with moderate to heavy carbonation. Easy to drink in a good way. Has a clean finish. Very refreshing. A good late spring/summer time beer. Next year, I hope the GLBC holds off on releasing this beer until the middle of May or so.

Pours a cloudy off-pink color. 1/4 inch head of a white color. Slight retention and slight lacing. Smells of pale malt, floral notes, and a hint of sweet malt. Fits the style of an American Pale Lager. Mouth feel is strongly sharp and crisp, with an average carbonation level. There is also a noticeable dryness. Tastes of pale malt, floral notes, rice, hint of hop, hint of sorghum, and a hint of sweet malt. Overall, weak appearance and aroma with a distinct sharpness.

Slight pinkish hue to it. Very floral in the nose & taste

Pours a white zinfandel color with ample white head and lacing. The smell is the worst part of this lager. Kinda lime sour with salt that doesn't transfer to the taste at all. The taste and mouthfeel are very smooth with a bit of a tart bite and hint of lime and salt in the finish. No lingering aftertaste and low carbonation. This is unlike any craft beer I've ever had. Think mexican lager with higher abv, no corn or adjust taste and add in a slight tart bite.

This is THE go to beer for those tired of being hit over the head with ultra bitter or super sweet beers. Dangerously drinkable. It has the possibility to become the ultimate summer beer.

Pours clear, pinkish-amber in color with 1/3 inch head. Taste starts of with cracker, and moves to a berry mix: strawberry, raspberry and blueberry jam, there is a sweet floral end which I imagine is the hibiscus. Sweet, light bodied, with medium-high carbonation. Makes for a great summer beer. Berries have a non-artificial taste that blends well with the base beer...Almost reminds me of a warm weather Alberta Clipper. Should have picked up a six when I had the chance.

Grandes Lagos Mexican Lager brewed by Great Lakes Brewing Co., with an ABV of 5.40% This American pale ale pours out a reddish amber color with a small white head. There is also a decent amount of lacing to this brew, it sticks to the side of the glass well. I really like the color of this brew. The is sweet with grassy grains and malts. You also pick up on a slight roasted smell and hops. The smell of Grandes Lagos Mexican Lager is really inviting. Now for the taste, it is bold but sweet with flavors. There is a lot going on in this brew. Picking up on some real nice sweetness and light hop bitterness. The body of this American Pale Ale is medium. There is a lot going on in this brew, it is real smooth drinking brew. There is nothing overpowering about this brew, it has a super nice balance to it. The mouth feel of Grandes Lagos Mexican Lager is Rich, Sweet, Smooth, Clean and Refreshing. Overall I'm giving this brew a 4.75 out of 5. I would definitely look this brew up again. If you are looking for a sweet great tasting brew look this one up. Great Lakes Brewing Co., Did a real nice job with this one.

12oz bottle best by 6/27/17 poured into a pils glass
A: Very pale, pink hue, thin head
S: Hibiscus & malt
T: Corn, raspberry, hibiscus
M: Light-bodied, smooth, just a hint of sour
O: As is this is good and worth a try. But I can't wait to try it on the deck on a warm summer day, it will be fantastic

Appearance: Pale yellow with a strong pink tint from the the hibiscus flowers. Initial 1/4" white head died back to a thin skin of foam across the top. Some persistent fine lacing noted.

Smell: Clean with a hint of floral. I got a hint of corn briefly but it didn't persist as the beer warmed up.

Taste: Crisp, cracker/pilsner malt, noble hope finish with a hibiscus flavor at the finish. The hibiscus flavor is a cross between cranberry juice and raspberry to my tastebuds. I've had the flavor before in Jarritos Jamaica soda and it's that distinct flavor again. Complements the lager nicely.

Overall / Drinkability: Very drinkable and refreshing. This would make a good post-lawn mowing beer in my opinion. I could easily have another. Paired well with curry meatballs over lemon rice, and I think this would go very well with Mexican. Maybe not too spicy a Mexican dish though. Glad I picked up a six pack of this.

Enjoy by 7/1/17. 12oz bottle poured into a pint glass. Pours the same color as a white zinfandel, as someone below described the color perfectly. It has perfect clarity and transparency. Small off-white head with light pink hues that fades quickly leaving solid retention and little lacing. The aromas are fruity and floral. Flower pedals and hibiscus is there. Lots of raspberry. Malts are there with some hints of corn. The flavors are clean and refreshing. The hibiscus does its thing without dominating. More hints of raspberries. There's a mild tartness that is barely noticeable. It's sweet, but nothing crazy. Solid malt backbone. Alcohol goes unnoticed. Mouthfeel is light and very fluffy with moderate carbonation. It's very smooth and easy to drink.

This is a nice unique lager. It seems to drink more like a "fruit beer" more than it drinks like a lager, but it works. This one would be nice with the warmer weather. Enjoyable stuff.