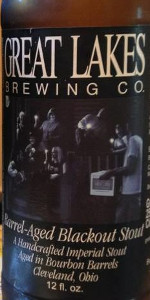 On tap into a snifter. I'm not a fan of most of the Great Lakes offerings I've tried, but I'm a sucker for BBA stouts. Look is deep black, no head. Smell is all whiskey barrel and dark fruit. Taste is more of the same. Lots of dark fruit again, more whiskey. This one actually reminds me more of a quad than a big stout. Perhaps more like a muted version of Stone w00t. Feel gives more of that slick sweetness and a nice boozy burn. I enjoyed this one.

Pours pitch black with a one finger tan head that fades quickly. Smells of roasted malts, chocolate, coconut and vanilla. The tastes follows the nose but with more coconut and vanilla. Full creamy mouthfeel. Warming as it goes down. Just a fantastic beer that I hope to enjoy every year! Much better than the regular BO stout if you ask me. Well done GLB!!

Poured from a 12 oz glass into a snifter, split with a friend.

Pours a deep brown opaque body with a small brown head that reduces to leave a ring of foam.

Aromas of vanilla, bourbon booze, sweet caramel, milk chocolate and molasses come through. Allowed to warm for an hour or so.

Overall a solid BA stout, not quite bcbs but nice and balanced and flavorful.

Don't like stories with your reviews? Take your grumpy butt elsewhere!

This is a bottle of 2008 BA Blackout. I'd set up three trades for this white whale - & all three fell through, with the other end vanishing & ceasing to respond to bmails. I was bummed. ISOs, bmails, almost deals, no BA Blackout. Then two fine BA members teamed up behind my back.

My wife, nursingbeer, decided to do something extra nice for our 10th anniversary. She sought out a saint among saints, sholland119, asking if he could put together a nice box for me. Well, on our anniversary she gave me a box of beer - 2 bombers of Unfiltered Double Simcoe (one of my all-time favorites), a 2009 Darklord (really???) & a 2008 BA Blackout Stout. No shit!! The two sneaks got me one of the beers I've wanted most for the past two years.

On to the beer which, for her trouble, I split with my rather marvelous wife. Poured black, with a hissing dark cap on it that fell quickly. Dark black. Smells great. Barrel, along w/roasted malt & hints of coffee come out of the goblet.

After all this trouble, wouldn't it suck if I didn't like it? Ha! Not much chance of that, since the base beer is great. And this is...sublime. The bourbon on this sucker is dead on, subtle, but with a bite to it, where it doesn't start to warm my chest cavity until about halfway down. The base beer is there underneath, & it supports the barrel-aged aspect wonderfully, although there's more vanilla & a touch of chocolate that I don't recall in the standard Blackout. Silky smooth going down. As it warms, the aroma improves even more, & it takes on a more oily feel to it. Damn. I could drink this until the cows woke up.

Perfect. Only my second pure five. Scott & Molly, thank you!!

October 2007 release. Purchased at the Great Lakes gift shop. Obliterative onyx with a sliver of sepia along the bottom edge. The three finger crown is the exact color of golden brown sugar and has a creamy solidity about it. Bourbon barrel-aged beers tend not to be lace monsters, but this one is pretty impressive in that regard.

Oddly enough, the aroma isn't bursting at the seams with bourbon. I love the fact that the GL brewers see this ale as an RIS that is accented with whiskey, not completely saturated with it. Dark chocolate, espresso and vanilla bean are joined by exactly the right amount of bourbon. Perfection.

The flavor profile is pretty much as expected. In other words, bourbon whiskey is at least as prominent as stout, without overwhelming the base beer. First impression: this offering is roughly as good as Blackout Stout, but not appreciably better.

For whatever reason, the body/mouthfeel seems to take a hit when a beer is barrel-aged. In any case, this special release doesn't taste as chock full of malt as the standard version. The flavor profile includes chocolate liqueur, ground coffee beans, a surprising amount of vanilla, dark brown sugar, blackstrap molasses and... America's greatest spirit. If I'm not mistaken, the barrels were acquired from the Jim Beam distillery. Good choice. Jim Beam Black is one of my standbys.

As noted above, the mouthfeel falls short of perfection. That doesn't mean, however, that it's less than pleasureable. Great Lakes is one of the best 'mouthfeel breweries' around and they've done themselves proud yet again. Time and warming add a light creaminess to the festivities.

Great Lakes Barrel-Aged Blackout Stout combines my second favorite style with my first or second favorite liquor, and is brewed by one of my favorite breweries. How could it fail to be anything less than amazing? Thanks to my brother for securing a double handful of this exceptional ale last autumn. I can't wait until this October when I can replenish my stock. Highly recommended.

The appearance was a decent jet black color with a quickly dissipating less than a finger’s worth of white head into the body. There was barely any lacing. The smell was a super strong alcohol. It was so strong that I had to let it warm up a good half hour just to let it warm up to my senses. Once that happened there were some light vanilla and chocolate characteristics. The taste was mainly sweet and alcoholic hot. The aftertaste was hot, sweet and sticky leading into the same sort of finish. On the palate, this one was a sipper, there’s no if’s, and’s or but’s about it. This was meant to be sipped. The carbonation was pretty smooth as well. Overall, I say this was a pretty good Imperial Stout well worthy of having again. Age this beer, don't drink this fresh, trust me.

2013 12oz bottle (acquired via trade) into a snifter at cellar temp.

Look: seemed to pour a little light and foamy to me, but the expected black with minimal head in the glass.

Taste: chocolatey, pretty sweet, mild bourbon, with some oak and maybe very minimal hops bitterness. Alcohol present but not dominant. No off flavors, but adds up to less than the sum of its parts nonetheless.

Feel: oily, a bit sudsy, medium-to-full bodied. Not at all dry.

Overall: pretty good, actually, but clearly a notch below the top tier. I was probably a bit hard on this; interested to see how the 2012, 2014, and non-BA iterations I've got in the cellar stack up.

Been waiting to try this for a while now. Traded for a few bottles and finally popped open a 2012 BA Blackout on 19 Jan 2013. No disappointment here:
A: looked a bit thin and lighter than I expected, but still poured a nice deep, dark brown with a quickly dissipating head.
S: smelled really nice, slight hints of bourbon on that classic blackout sweetness.
T: very nice, bourbon notes, alcohol is hidden very well behind sweet flavors of vanilla and syrup.
M: extremely smooth for a big caliber barrel aged stout!
O: exceeded expectations, as good as I expected....can't wait to drink another one!!

Thanks to foofaa for sharing this on my birthday, enjoyed chilled from a mug.

The color is black as the name, very thick sandstone head with creamy appearance, lace sticks very well and retention is very good. The smell is bready with slight sweet caramel and vanilla odor with slight roasted and peppery tinged aroma with nice toffee and light bourbon sweet woody nose. The feel is great it starts sweet with mild tannin and full middle with great carbonation adding levity with slight roast and hint of alcohol as it finishes.

The flavor is very full with lots of toffee, cocoa, wood with vanilla and bourbon interwoven with slight coffee and bready flavors from the yeast with a toasted and spiced taste which brings out some dark fruit toward the middle with mild earthy hints of raisin and chocolate toward the finish with oak blending well throughout the flavor. Overall this is a splendid oak aged stout, it satisfied from first taste and I didn't want to drain the glass, but it left me feeling satisfied and it is one of the most drinkable wood aged stouts I have had.

A - Poured an opaque, deep black body with slim tan head that receded into patchy film and left decent lacing around the glass.

S - Subtle nose for a barrel-aged stout with hints of bourbon, chocolate malt, licorice and a bit of alcohol.

T - Initial flavor is a mixture of bourbon, chocolate, mild coffee and woody notes with a definite oak presence. The bourbon rose to the forefront as the liquid approached room temperature.

M - Smooth and creamy texture with soft carbonation and a bit of heat from the alcohol presence.

D - The bourbon character is fairly subtle here, making this one go down quite easily. Good stuff!

Pours out very dark with a bit of tan foam. Looks a little thinner and less viscous than I like my stouts.

Smells pretty good - lots of smoke and burnt notes, with a good deal of sweetness, malt and a nice splash of bourbon.

Taste is surprisingly boozy for the relatively low (9.5%) abv. Poured it out cold, and initially there was a ton of burnt and smokey character that mellowed out a bit as it warmed. Lots of bourbon notes and malty sweetness as well. This is my third time trying this one, and I've been underwhelmed each time.

Mouthfeel is a bit thin - but pleasantly carbonated.

Overall it's thinner with more burnt and smoke flavors than I like in my stouts, but still a decent barrel aged stout.