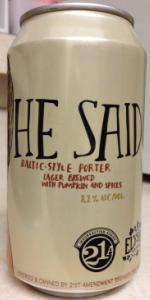 S - More cola in the nose: spicing is apparent, but nothing too distinct. Notes of chocolate, herbs, and spice rack. No over pumpkin / gourd, or even cinnamon for that matter. 'Cola' is the best descriptor I can conjure. Maybe some very mild notes of pie crust / diacetyl when I really look for it.

T - Taste follows the nose: a thin, slightly watery cola flavored brew. Spices are apparent, but again indistinct. No cinnamon, thyme, or allspice stands out, but doubtless they are in there. Mild notes of peppery spice on the finish.

M - Feel is thin & watery, for the style and the abv. Mild lingering notes of chocolate & spices. Medium-bodied with crisp carb. Almost a bit of peppery chile spice finish.

Overall, not quite doing it for me. This one misses the mark, in my honest opinion. Not terrible, but definitely not enough pumpkin going on here to keep things interesting, and a bit too much cola spicing on this one.

Sampled on 10/4/14 at annual pumpkin tasting party, reviewed from notes:

Poured from can into tasting glass

A great Baltic Porter, but lacking on the pumpkin characteristics. The addition of pumpkin may have changed the overall taste of the beer, but not in a way that anyone can really tell that pumpkin had been introduced as one of the ingredients.

Great looking, dark, roasty, earthy, hops, etc. Bold and flavorful. Again, a great baltic porter very much to true to the style. Also, a great offering coming from two great breweries. However, a little disappointed with the lack of pumpkin (or even typical pumpkin beer flavors, i.e. spices..) especially since Elysian is so well known for consistently turning out great pumpkin beers.

Points off for the lack of pumpkin. However, if this was "HE SAID BALTIC PORTER" I think it would be closer to 4.25.