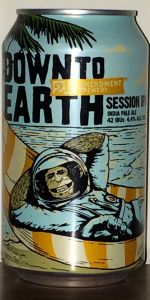 Notes: Down to Earth is the natural evolution (pun intended) of Bitter American, our original session ale. We thought it would be fitting to bring our space chimp home and let him chill. Whether you have a long mission behind you or a full afternoon ahead, this session IPA will help keep things real. More relaxed than an IPA, but with all the hop aroma and flavor, Down to Earth is our tribute to unsung heroes and unplanned adventures. 
View: Beers | Place Reviews
Reviews: 106 | Ratings: 534 | Log in to view all ratings and sort
Reviews by Denotoole:

This is a terrific beer. Just terrific. I could drink it all day, but if I did I would be a poor father and husband since it contains alcohol albeit not very much alcohol.

Down-to-Earth is aptly named since its glory is a mundane one. “Not Reinventing the Wheel” is a bad cliché and a worse name for a beer, but that’s what is going on here. It simply takes a good idea—a somewhat hoppy session ale—and nails it. It pours a sort of muted gold. Not sure what the hops are—Galaxy or Amarillo maybe, or maybe Citra since even my mom cooks with Citra lately. But it’s citrusy and good. ABV is 4.4% but feels even lighter than that going down. A few weeks ago I accidentally drank one in four sips while barbecuing.

First time I had this beer I was at a dope rooftop party here in Chi-burg, and befitting the summer vibe there were no glasses available. Even still I’m a gentleman and way into lacing, so rarely drink directly from a can. What to do? I drank from the can. Glasses were all the way downstairs, and who would I be to rebuke the host by fetching one? That’s when I discovered the hoppy but not dry mouthfeel. I liked it and had another.

The next day I got a six pack and a glass. Much different, more the smooth, light experience of the first paragraphs above (and that’s light as in easy not light as in Lite). Since then I have stuck with a glass and I guess I prefer that, though it sacrifices that bite somewhat.

Poured from a 12oz can into a pint glass.

S: Big, big citrus & tropical fruit. Smells like I want to drink it!

T: Bit of a letdown - thin, metallic hop-bitterness & only traces of the fruit bouquet. There's a bit of a grainy malt counterpoint to the hops on the palate, but nothing really jumps out as special.

M: This beer get plus points from me for managing to have a pretty solid body. Carb is right where I like it (medium to a bit high) & there's enough malt to give this brew some heft. Arguably one of the 'bigger' session IPAs that I've tasted.

O: Went out to pick up some Bitter American & came home with this. I've got nothing but love for 21st Amendments other IPAs & this is a pretty decent addition to the lineup. Plus, like with all their cans, I'm loving the artwork.

Pours an orange hazy color.
Smells of sweet, orangey / tangerine notes.
Nice head of about one and a half fingers width.
Hops pop with a nice citrus tropical burst up front. There is a nice sweetness that comes in and follows through to the finish.
The malt backbone on this session is very nice and eliminates the watery and light taste that many sessions suffer from.

Flavor: Firm earthy bitterness up front. Moderate melon and stone fruit flavors with an underlying biscuit malt base. Balance is firmly to the hop bitterness. Finish is clean, crisp, and dry. Aftertaste lingers with a slight hop bitterness.

Overall impression: A light and refreshing pale ale. It's not an IPA and the "session" thing is gimmicky. Still, a well done beer that would work on a hot day.

A: Pours a golden yellow color with 2 fingers of head that fairly quickly fade down to a tiny cap

S: Some citrusy and grassy hops up front along with a solid maltiness and usual 21A yeast profile. Nice for 4.4%

T: Follows the nose. Starts off with a good balance between the malt and some grassy/citrusy hops. Goes into a light bitterness with matching sweetness. Finishes with a mix of the yeast/malt profile and an all too typical taste that most (if not all) session IPAs have

M: Light-medium bodied with moderate carbonation. A touch watery, but that's expected with the pseudo-style

O: Definitely a solid addition to the session IPA bandwagon, with some nice flavor and good balance. Not too watery, which is nice. Crushable as expected. Worth a shot

One of the best sessions I've had. Love me some 21st Amendment!

I thought this beer was very fully-flavored and nicely hopped for a session ipa. I was happier with this than I was with many big name session IPAs I've had, and as happy with this as some of the super fresh session beers and pale ales I've had from great local breweries.

L - Orange-yellow pour into the glass. Hardly any head to it.
S - The tropical smell is there, but it's not powerful or strong.
T - There is a very light citrusy taste to it, but it quickly goes away.
O - I probably won't be grabbing this off the shelf in the store again by choice, but it's an easy drink.

Love this brewer. This is an adequate session IPA. Not quite up there with Carton Boat beer or their own BITTER AMERICAN - which I liked better.

A: Hazy orange amber in color with low white head. A bit of lace. Limp.

T: Follows smell, but much more abundant: tropical fruits, grapefruit, and light caramel. Finishes with a decent amount of bitterness.

O: As good as most session IPAs, but a little bland.