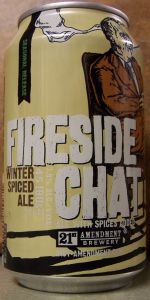 Notes: Like FDR’s Depression-era radio addresses, which were like a kick in the butt and a hug at the same time, our Fireside Chat is a subtle twist on the traditional seasonal brew. We begin with a rich, dark, English-style ale and then we improvise with spices until we know we have a beer worth sharing with the nation.

Fireside Chat is our early winter seasonal brew available from October through December in six pack cans and on draft. Brewed like a classic, warming Strong Ale but with a subtle blend of hand-selected spices for just the right festive flair.

Reviewed by KomodoDragon from Virginia

Smells like a hot chocolate perhaps one where a piece of licorice was dropped into it.

Hefty, messy sweet malt out of the gate, Roasted malt, chocolate and nutmeg, ginger, spiced nuts. Above the norm carbonation. Lingering burnt finish and some alcohol warmth. Reminds me some of a Mexican hot chocolate - which for me is a one and done drink,

Likewise, this is robust and a sipper, which I appreciate. It a bit of a stew of sweet & spice flavors that don't fully compliment each other. But it might compliment a fire and a chat in the depth of winter [at an affordable price], so for that, kudos.

Overall: A nice Winter Warmer here. Some dark and roasted bread notes with some hints of bitter pine and cocoa. Malty, yet not too sweet and incredibly dry for the ABV. Better than I expected based on the reviews on here. This one is at least average, probably above. (Rating: 4.02)

Reviewed by HipCzech from California

Smell: Toasted grains and toasted caramel. Nice and malty. Hints of cocoa. Cinnamon and some nutmeg.

Taste: Similar to the nose but more intense. Very malty. Toasted bread and caramel. Nutmeg. Some cinnamon. Earthy bitterness that builds towards the end.

Feel: Smooth with a medium body.

Overall: An easy to drink spiced ale/winter warmer. I like the maltiness (as opposed to the sweetness that some other winter warmers exhibit) and the fact that the spices don't hit you over the head. The body is a bit light for my preferences for a proper deep-cold winter warmer, but it's fine for temperatures in the 30s and 40s.

Reviewed by Mark-Leggett from Missouri

5/5  rDev +42%
look: 5 | smell: 5 | taste: 5 | feel: 5 | overall: 5
It was a wintry day as I sat by the wayside, an old radio popped on and drifting through the air I assumed I heard the voice of FDR giving a rather solemn announcement, only it wasn't that old sport but none other than Kris Kringle admonishing the world that Christmas would be cancelled if we didn't go out and wrangle a can of Fireside Chat from our nearest store.

Almost as if transported through a sleigh ride- there it was in all its glory; even still I wasn't totally taken by the illustration of FDR. I surmised it was all marketing and I rather begrudgingly grabbed the beers and went on my way, sure of the possibility that it would be just some potentially lame offering from 21st amendment.

It's easy to get suckered in by their illustrations and end up disliking the beer, but this was something different. As I would soon discover it would provide a state of perfection not easily tasted in these days...

It poured a brown-sugar-brown, and I threw it down the ol' hatch, expecting some form of mediocrity. That was until I realized it was the best blasted beer I'd ever tasted this side of the Rio Grande.

The smell was raisins drenched in honey, and a hearty dollop of pumpkin pie sweetness lingering like an oatmeal-raisin cookie crumble.

Mouthfeel was less than medium, highly crisp, yet smooth.

The taste as was faithfully described didn't disappoint, before I knew it I was toasting to both FDR and Kris Kringle, I could have swung on a chandelier if there was one. Raisins stuffed into chewy oatmeal cookies, waterfalls of caramel winding their way to my stomach, and all the spices of India summarized in a single, subtle, sublime note. Not too much spice, not too faint, the balance itself deserved an award.

And most surprisingly, the alcohol heat was nowhere to be found, a disappearing act that the best magician would be proud of.

Overall: I would not hesitate to give this the equivalent of 3 Michelin stars and 5 forks and knives, or just a solid 5/5. This will undoubtedly aid in the enjoyment of any holiday feast. A brilliant and blessed beer, one to truly savor.

Smells of malt and caramel.

Tastes of sweet malt and caramel with cinnamon and nutmeg.

This brew is a decent representative of the type.

3.83/5  rDev +8.8%
look: 5 | smell: 4.5 | taste: 3.5 | feel: 3 | overall: 3.75
Brown with ruby highlights, dense khaki head, excellent retention, rings of lace
Deep malty aroma- toffee, bread, and toast, along with some cinnamon and nutmeg
Big British malt flavor, biscuits and toffee, way too much nutmeg, cinnamon is good, though
A bit too thin for what I want in a winter warmer, but carbonation is spot on
A bit more body and a bit less spice and this would be great

Reviewed by GregBarleycorn13 from New York

3.78/5  rDev +7.4%
look: 4.25 | smell: 3.75 | taste: 3.75 | feel: 3.75 | overall: 3.75
Poured moderately hard from a can into a snifter glass, forming two fingers of foamy white head that soon faded to heavy lacing with major legs. Brown and slightly orangey body. Smell is a bit of barley and spices, pretty subtle. Taste follows the smell, with barley forward and some spices in the mid, but after taste is still barely. Moderate carbonation and just shy of medium bodied.
Oct 24, 2020

Reviewed by TBoneJones from Texas

3.77/5  rDev +7.1%
look: 4 | smell: 3.75 | taste: 3.75 | feel: 3.75 | overall: 3.75
Nice creamy brown-bodied appearance/ creamy head and lacing.
Nose is malt and hops with caramel and some spice like clove, basically nice.
Taste is toasted caramel and spiced bread, with an odd cider-like/ astringency that lingers. But there’s a nice bitterness and even a bit of char n the roasted and even woody notes. Any overall sweetness is of light brown sugar, but is subtle.
Feels medium-smooth with medium carbonation. Dry finish.
It’s actually kind of complex.

1.9/5  rDev -46%
look: 4 | smell: 2.75 | taste: 1 | feel: 4 | overall: 1
Notes from 4/20/2020.
Poured from a 12oz can into a Rastal nucleated Teku glass.
The body is a very dark brown with 2 fingers of tan head. Retention is a little above average leaving a not quite thin cap. 4.00
The aroma is very low in strength and all I can get is a hint of sweetness and spice. 2.75
The taste is a little below medium-high in strength and I'm trying to get past the unfortunate medicinal flavor. There's some spices, and then the awful medicinal flavor attacks. It's like someone took an ancient leather shaving kit that has old dried smeared toothpaste and shaving cream, and stinks of stale aftershave. Then they poured water into the shaving kit, thoroughly shook it up, and poured it into a glass. There's a moderate bitter finish which perfectly excentuates the medicinal ancient shaving kit flavor. 1.00
The mouth feel is medium in thickness, a little creamy, and has a low astringent finish. 4.00
Overall, it's irredeemable. 1.00

The taste is rich brown bread and toffee with lots of dark chocolate. Hints of ginger and generic spice, but the malt dominates over the spices. Finishes with a touch of earthy hops and lingering roasted, black coffee bitterness.

A fine beer. I wish the spices were a bit more prominent, but it's a delectable Winter Warmer.

S: Malts and spice. Christmas in a beer can, with nugmeg, clove, and cinnamon.

T.F: Semi-sweet and malty... overspiced with all of the above... cloying and earthy. Some hop bitterness for balance. Medium bodied.. a bit boozy... and a shit-ton of spice at the finish.

O: Not really my thing. It's a spice-rack extravaganza with a big boozy malty beer. Not one I'd grab again.