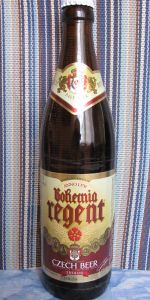 Notes: This classic Czech lager is the flagship beer of the Bohemia Regent brewery. We use only the best ( but local ) Saaz hops and Moravian barley , soft low salt water from our own artesian wells, and pure cultures of bottom fermentation yeast strains.Double decoction mashing and 90 day secondary fermentation in the centuries old brewery cellars deliver a beautifully balanced, lightly carbonated lager- easy on the mouth hoppiness and medium bitterness.
View: Beers
Reviews: 27 | Ratings: 53 | Log in to view all ratings and sort
Reviews by wl0307:

Tasted this beer on tap in a medieval-themed restaurant in Cesky Krumlov three weeks ago. I was so happy to see a different beer on offer after realising most restaurants and pubs in that area are dominated by Pilsner Urquell and Budweiser Budvar (apart from the local pivovar Eggenberg)... Nice for a change.

The 12% abv Golden Lager pours a light golden hue, with a gradually disappearing white beer head, until no trace of it at all. BTW, I found out that the barmen in most pubs I'd been to in the Czech Republic liked to wet the glasses before pouring beer straight from the taps. Is it really the way it should be served? I really doubt it, but I can see their point: to pour the beers as fast as possible. But in most cases the beers were still served under-measured, and in several cases it was so serious I dared to confront the waiters/waitresses for top-up...

The nose is nice and complex, with a very delicately floral and herbal, almost lavender-like, aroma, lightly buttery note and bready maltiness, plus lightly acidic, honeyish aroma. Not a single element is too assertive, while a quite elegant hop aroma sustains throughout. The taste has lightly acidic, lime-like lager malt flavour upfront, followed by a softly, sweetened-lavender-mead like floral flavour at the back, and a mildly bitter-sweet, crisply bitter finish. Overall it's a soft, very easy-drinking lager with a rather nice balance.

Another find at a local good retailer. Not sure just what Regent this is, but since it has 5.0 on the label, I'll follow that as the guide. .5l brown bottle -- a plus!

A -- Hazy Gold color with a creamy white head that settles to a respectable cap. I'll give points for the rich gold color.

S -- DMS in that *fresh* aura it takes on. Mild earthy, herbal hops and bready Pils malts back.

T -- Good, sem-sweet bready malts up front with that flavor that only comes from Czech beers (maybe Slovak, too). Ever so lightly diacetyl, earthy and herbal hops in the finish that linger into the aftertaste. Some of that bready, buttery malt right at the end of the aftertaste.

M -- Body is light-medium with a soft to lightly dry mouthfeel.

O -- A very nice example of the style that reminds me of Pilsner Urquell of old (and maybe even fresh at the source these days?). I'll certainly keep this in mind as I'm browsing the better beer aisles.

A: Pours a golden color with a small head that fades to bits of lacing.

S: Aroma of grain, mild malt sweetness and a light trace of hops.

T: Taste has an initial bitterness with a bit of malt sweetness and slightly grainy. Bitterness continues to a fairly clean finish.

F: Light body, crisp and somewhat refreshing. Beer seem to have a gritty texture about it.

O: Decent beer, but sort of a middle of the road beer for the style.

Back story: When I finished my masters degree in the Summer of 2012, friends gave me a book on 50 beers to drink before you die. Shortly after, I vistied the Czech Republic with my girlfriend and brought back this beer, because it was in the book. Well, I never got around to reviewing it. Well, I was very surprised to pull it out, look at the date and see that it was "best before January 2013". Well, can't hurt, right?

Apperance: Golden with slight chill haze from standing in the fridge for the past 6+ months. Non-existent head, but leaves a few laces.

Taste: On the roasted side for a pilsner, which I like. Not your average Carlsberg, Budweiser, or whatever you have in your country. On the malty scale we are balanced towards sweetness, and not a lot of bitterness at all.

After visiting the city, I decided to try the local beer and was pleasantly surprised. I enjoyed it all: the appearance of the bottle, taste, color and smell. Porobujte skipped and other beers of this brewery !!!

L- Pours a rich golden amber, clear, with a 1Cm white head that's holding well. [10mins later, continues to hold + forms lacing down sides].
S- Mild, I just get some bready grains.
T- Quite prominent dry trad bitter hops alongside some light bready malts.
F- The hopping is lingering on my tongue; I expect it would be refreshing on a hot summer's day.
O- Alas it's January and snowing, so the prominent hops without *any* balancing richness is not ideal right now. To sum up, it's a very trad-style lager, just with notably prominent/bitter hops. To me, in winter, the hops are majorly unbalanced. I'll finish it but I won't drink it again.
500ml bottle BB: 02/08/2021 Bought from TremblingMadness/York as part of a large pick-your own consignment to London.

I do not know his source(s), but @tone77 really comes through for The CANQuest (tm)! I am getting ready to go on a hiatus (read prostate removal surgery) & I wanted to make sure that I got him the stash that I had set aside since his last visit. I was pleasantly surprised when he had MORE beer for me, including this one. Wow! Many thanks.

From the CAN: "Traditional Czech Beer"; "Premium Pale Lager Beer".

It is their verbiage that gives me pause. Is this truly a Bohemian Pilsner or should it be identified as a European Pale Lager? I plan to find out, beginning with a Crack! of the vent. I had a Lager glass at the ready, having been well-seasoned over the past several days as I recover from too many Stouts. My C-Line Glug led to some magnificent foaming that created two-plus fingers of dense, foamy, rocky, French Vanilla-colored head with excellent retention. Color was a very pretty Golden-Amber (SRM = > 5, < 7) with NE-quality clarity. Nose was a pleasant CANbination of biscuity malt & grassy Noble hops. Hmm. Mouthfeel was on the weak side of medium, just barely past thin & watery. The taste was only moderately hoppier than it was malty. It really did not measure up to Pilsner Urquell, which I think is the standard bearer for a Boho Pils. CANversely, in looking at the site's new Style Guide description of a Euro Pale Lager, it measures up nicely. I am leaving it as a Boho Pils, but the numbers get hurt as a result of rating to style & not to taste. It just did not pack the Noble Saaz flowery/grassy/hay-like punch of others in the style. Finish was dry & refreshing, but it just did not quite measure up, IMHO. YMMV.

Bohemia Regent has a very thick, mousse-like, ivory head, heavy lacing, and an orange-gold appearance, with lazy bubbles. It is not so clear, with powdery (and some chunk) sediment. The aroma is of crackery malt and grassy hop resin. It has a similar flavor with strong bitterness. Bohemia Regent has a medium body and a crisp finish.

Poured from a 16.9 oz. can. Has a deep golden color with a 1 inch head. Smell is of bready malts, grains. Taste is malts, grains, hops are present, very refreshing. Feels medium bodied in the mouth and overall is doing a great job of quenching my thirst on this humid night.

Poured into a pilsener glass (yay, for once I get to fill it with a true Czech pilsener).

A: Clear golden color, tiny bubbles. Not much head. Little bit of lacing on the glass.

S: Not a lot of aroma, but what you do get is a clean, dry hop scent. No other aromas (like bananas, fruitiness, or corn scent), as is appropriate for the style.

T: The strong point of the beer. It tastes like a true Czech pilsener, as opposed to a German or other 'generic' pilsener. Tastes a lot like Czechvar / Budweiser Budvar, which IMHO is a good thing.

M: Light, crisp, but not thin or watery. A slight dry hop aftertaste, but otherwise clean on the palate.

O: A solid Czech lager (if you can find one that isn't skunked). I liked it better than Pilsener Urquell and found it almost as good as Czechvar, which is saying a lot.