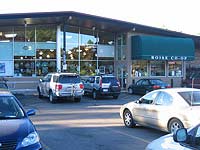 View: Place Reviews
Reviews: 12 | Ratings: 21 | Log in to view all ratings and sort
Reviews by Beerandraiderfan:

Head on in, typical cookie cutter co-op appearance in terms of structure and employees, I'm always amazed at the conformity with these types of operations and people.

Staff is actually quite helpful, beer guy I talked with knew a decent bit about everything, talked from personal experience, likes, dislikes, wasn't full of himself at all. Listened, made recommendations. Pointed out the stuff off the beaten path. Nice.

Would have liked to have seen more ID beers, but frankly, this place actually had the greatest selection of ID beers of any place I've ever been, so there it is.

Its a little pricey, but do the temporary membership thing.

Love the Co-op. They are by far the best selection to price ratio in town. Bomber prices at least $1-$2 dollars cheaper than other bottle shops in Boise. Matt their beer guy that I've ran into a few times is really helpful and knowledgeable...he is always happy to dish out info on what is coming into town soon which is nice. You can buy singles of any beer which is always fun.

Nice selection of beers here, international and Pacific Northwest. Lots of short run seasonals and specials also.Pricing seems slightly high, but I’m still adjusting to the US market. Will definitely be back for more.

Offers the best selection of beer in the Boise area, from European imports to local offerings. All beer is refrigerated, so one does not need to worry about (hot) storage issues.

Service is first class/second to none. I buy 99% of my beer from this place.

I would HIGHLY recommend this spot.

The Boise Co-Op is a diamond in the rough for beer lovers. It is wedged into a residential area about 10 blocks from the heart of downtown Boise. It's not out of the way, just out of sight, out of mind. Once you get there, you'll keep coming back. Matt, the beer guy, is witty, friendly, outgoing, and most importantly, knowledgeable. He is a one man beer department, so if you come when he is busy, and want to talk his ear off, like I do, be prepared to be patient while he scoots around to others. Matt has always kept me up-to-date with new inventory, specials, and beer gossip.

The Co-Op is a great place to get a quick lunch, or get some great produce, but I spend about 95% of my money here on beer. The selection is on par with really good bottle shops, while being at grocery store prices. I find that odd because everything else at the Co-Op is more expensive, but not the beer. I generally find 22oz or 750ml bottles, for one to four dollars less than the local bottle shops. As a member of the Co-Op, I get one day a month to take 10% off my total. I always use that on days that I fill up the cart. If you like good beer, and you are in Boise, take time to get to the Co-Op, you will find something good to take home.

Flew in from TX and this was my first beer stop before a wedding. I had talked with the beer guy Matt before hand and he organized a list for me of what they had (including specials you have to ask about) so I had a pretty good idea of what I wanted before going in. Luckily I ran into Matt there and he took the extra 10-15 minutes to look through his stocks and find a few treasures for me he hadn't even thought of. This place turned out great, I wish I had more money/room to bring back more of their stuff. Matt was great, he was a very helpful contact and I would not have come back from Boise as happy with my beer finds if he had not been around. Next time I am in the area I will definitely hit it up.

Overall: Great place for beer and wine, make sure to get in contact with Matt, very reasonable prices, awesome selection.

Stopped into Boise for a concert in the middle of a road trip to the West Coast, and wanting to find some local beers managed to find the Co-op.

To be honest, this place didn't really look or feel all that much different from any other co-op I've been to. We weren't really sure if we could the beers in the main co-op or in their separate wine shop on the other side of their parking lot. After wandering around for a bit and ending up at a sample booth giving away tastings of a few gluten-free beers from a Colorado brewery whose name I immediately forgot, we decided to keep looking around.

We finally found the beer section...and what a beer section it was. There was a surprisingly small selection of Idaho beer (although it was admittedly probably bigger than anyone else's), but everything else from the western half of the United States was represented. Aside from the Colorado, California, and Pacific Northwest brews, I'm pretty sure I haven't seen as many Utah beers in my entire life as I found nestled in underneath the Woodcut #5 and Black Butte XXIII bombers at the Boise Co-op.

Around the corner laid the largest selection of quality imports I have seen since moving away from California four and a half years ago. Belgium, the U.K., Germany, Scandinavia, and others were all represented; if it's available for import into the U.S., chances are it's here.

As is usual at most liquor stores, I didn't even bother finding someone to help me, so I can't really comment on the service. Price seemed pretty reasonable for the handful of things I recognized, although I spent most of my money on rare annual releases or things I haven't seen before.

This is a community staple. Matt down there has made that place my goto place for sometime. He really cares about his beer, his department and store. More importantly I see this guy at almost all of the great beer tastings in town or helping someone out with beer.

Store is great. Indvidual beers or 6 or 12 packs. Lots of 22oz choices with local growlers for sale also.

Pricing is great. No really I base my price standard when I travel or walk into another shop based on where they price at.

They have a true labor of love with their store and it's beer department.

I hit the CoOp at least twice a month.

Quality is pretty good, its a 'green' grocer, and its packed into a tight space, but they maximize the beer selection for what they have.

Service is always great in the Beer Section. The rest of the store isn't bad either, but there are times that you can end up waiting in line for 10 minutes to check out. Anyway, the current Beer Guy Matt is awesome, he knows his stuff, doesn't mind talking, and is passionate about beer without being over the top. He also sends out emails every week when the CoOp gets new shipments. Side note: got a discount there on a case of the 2010 Abyss, which I thought was pretty cool.

Selection is a little better than Brewforia and about 3/4 of what Brewers Haven has (in my opinion). Each of these three (Brewforia, Brewers Haven, CoOp) stores carries a couple of things I can't find at the other places. The CoOp has a better European beer presence in my opinion, and stock a lot of US microbrew seasonals. Idaho is pretty well represented in their selection as well.

On most Specialty beer, they ARE the cheapest I've seen in the area.

As far as Boise goes, this is really only one of two places to get good beers. The selection is pretty good and the variety is really nice. A lot of Rogue, Stone, Deschutes, and quite a few Belgium/European brews. Can't really comment on the service since I've yet to ask for help but it's very easy to find somebody as they are all over the store. Some of the brews can get a little pricey but for the most part they are on pace with other stores. The other great thing about the Co-op is the selection of meat/cheeses/any other delicious food that goes well with beer. It's just too bad you have to buy a membership...

As far as places to buy beer in Boise, this is about as good as it gets. Previous bottle shops have failed in this area, but the Co Op is a constant. They've recently picked up a new beer guy who from what I've heard from a friend is very passionate about the elixir.

The Co Op does a pretty great job of changing up its selection on a frequent basis. Prices are a little bit high but not astronomical and they're worth visiting for more than just beer, since they've got a whole range of interesting food and drink.

My only gripe would be the lack of eastern beers but that's just how it is in this area. Be great to see some stuff out of Dogfish Head and some of the east coast breweries I've heard a lot about...

Lifetime membership is about $65 and worth it.

Visited the Coop while in town over the weekend, I just moved to Utah last summer due to my work, so I took this trip as a good reason to pick up some quality beer.
If you live in Boise, get the membership. If your visiting, they should give you a temp membership that will save you 10%.
Selection was impressive, there are two sides to the cooler; one side is mostly regional micros, and around the corner are mostly imports.
Picked up some Ommegang, Stone, Rogue, Grand Teton, and Deschutes; totaling 10 big bottles and 4 six packs. Spent about $122.00
Overall, pretty good selection, would like to have seen some more NW selection as well as some Sun Valley Brewing bottles. Recommened!!