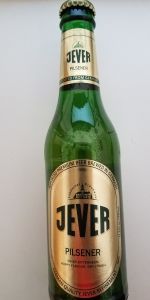 Notes: Hardly any other premium beer has remained as true to itself as Jever. For 170 years now, Jever has been cultivating its own Frisian-bitter taste.
The special mix of the best brewing water and high-quality hops makes our Jever so Frisian-tart and refreshing at the same time!
View: More Beers
Recent ratings and reviews. | Log in to view more ratings + sorting options.
Rated: 3 by Ernald_Elbertson from Delaware

Beer poured golden with a very nice white head that is leaving lacing behind.

Nose is nice, white bread and crackers and floral hops.

Taste follows the nose with a white bread and crackery malt base that is heavily hopped with floral hops leaving a clean bitter finish.

Mouthfeel is light bodied and cleanses the palate very nicely.

Overall a very nice example of the German Pils style!

Aroma: Mild aromas of German bread malt, pale malt, yeast with some bread on the finish. (3.75)

Feel: Light to medium-bodied. Strong yeast in the middle with a relatively strong bitter finish. (4.25)

Overall: A really nice and hoppy authentic German pilsner. Noteworthy for leaving a stronger bitterness off the end of the palate. Makes it crisp, but leaves a bite. Malts are a somewhat covered by the bitterness. Still, I enjoyed the bittering aspect of this one. Enjoyable for a crisp and bitter German Pils. Maybe Pivo Pils was designed after this one. (Rating: 4.18)

Overall not bad for large scale pilsner, better than I remember from Germany

Moderate bitter noble hop aromas interspersed with the kind of savoury, grainy malt flavour a lot of German beers tend to have, if that makes any sense. There is a ‘pungency’ to it, I’m sure there’s a word in the beer world for the smell I’m smelling. Grassy, hay, grainy.

Taste is bitter hop forward that wanes slightly in the middle before leaving a nice bitter impression on the finish. A particular kind of hallertau focused bitterness, when I stop to think about it, it reminds me of all the “””special””” IPAs out there that go all in on one hop type (‘our new beer is a citra bomb!!!’ kind of thing), so it feels like this is a very pleasantly hopped Pilsner. I think people who like that will love this. This gives the beer a strongly floral, grassy hop bitterness, but if woody character in there, with just the lightest touches of a vinous body and a bit a spiciness. General cereal grains and malt balance it out, especially towards the middle.

Lighter bodied, moderate carbonation, crisp and smooth mouthfeel. Relatively long finish that is bitter in character, little bit of breadiness on the centre of your palate.

Others have pointed out its not the most complex Pilsner from Germany, I would agree. Then again, I see plenty of mediocre craft beer pils that are no better than this score phenomenally better on BA. This is a pleasant Pilsner that is definitely unique in character compared to many others, leans into the pleasant noble hop flavour profile more than most other German offerings, for that alone it’s very enjoyable!

Reviewed by LanceBiggums from Canada (AB)

3.47/5  rDev -3.3%
look: 4 | smell: 3.25 | taste: 3.5 | feel: 3.5 | overall: 3.5
Pours a typical pilsner yellow with three fingers of puffy white head. Not too much on the nose, just a whiff of sweetish malt, slightly metallic beeriness, and maybe a hint of sharp hops. The taste gives only a very slight creamy malt, followed by quite strong hops that border on astringent. If these were North American hops it would be too much. With these old world hops it's strong, but not overwhelming. It's refreshing enough on the throat, and the peppy carbonation does a good job of pushing the flavour around. Overall a pils of a different sort, maybe a bit closer to the Czech style than the Bavarian pils, but with its own character. Quite decent, but I don't think I'll reach for it again.
May 01, 2022

Rated by Kubishark from Maryland

Reviewed by fumobici from Washington

Looks correct, nothing to get excited about, the head is creamy with lacey lacing. Smell is redolent of noble hop. I guess you either like it or you don't. I do. The malt is in the background. There is a dank skunk note which every Jever I've ever had, in the US or the EU, possessed which I take to be the hops used. I find the Kushy notes endearing. Mouthfeel is luxurious for a pils, notably so. Aftertaste is fading malt and bracing Hallertau.

Overall, fantastic and a must-try for pilsner lovers. If you like the hops, you should love the beer.

Pours a pale translucent yellow with about one finger of white head which dissipates quickly leaving very little lacing.

Smells spicy, bready with a slight amount if skunk.

Was expecting more from this one. It's not bad just fell short if expectations.

Reviewed by datstankadank from New Jersey

Reviewed by morimech from Minnesota

3.68/5  rDev +2.5%
look: 3.75 | smell: 3.75 | taste: 3.5 | feel: 4 | overall: 3.75
16oz can with a best by date of 10-21-21.
Straw color with just a hint of haze. Big soapy head that had excellent retention. Aroma of grass and lemon with some hint of grain. Flavor is a lot weaker than American versions of German pilsners. Mild bitterness and hop flavors of grass and pepper. Definitely taste the German pilsner malt that is dry and cereal flavored. Light body and appropriately carbonated makes this beer extremely easy to drink and refreshing. Not the greatest German import but this is also not the freshest one I have had.
Apr 25, 2021
Rated: 3.89 by leinie13 from Ohio

Reviewed by jonphisher from New Jersey

Aroma is clean, grassy, earthy, and a little bit of fresh bread. The taste is a little lemon/lime sprite like followed by earthy hops.

Mouthfeel is so crips and clean with a really solid and pleasant bitterness. It is really really enjoyable, it also finishes clean and dry.

Overall thIs is a really really good beer. It is incredibly hoppy and yet insanely drinkable and clean. It begs to be sipped again and again and it is hard to resist. I have really enjoyed buying beer lately ever since I found it locally. A super enjoyable beer.

Rated by elnachooo from Spain

Reviewed by JRybacki from Pennsylvania

4.08/5  rDev +13.6%
look: 3.75 | smell: 3.75 | taste: 4.25 | feel: 4.5 | overall: 4
Poured from a 16oz can.
Strong golden color and dense two-finger head with good lacing. Notes of citrus and bread in the aroma. The real pleasure is the taste and mouth feel- bright tasting and hoppy and simple crisp, clean feel and finish. Overall, clean, crisp, hoppy pilsener with a nice mellowness afterwards. This is what all the american microbreweries are striving for with a fair amount of success. But there is nothing like going back to the 'beginning' and finding out what a simple pilsener beer can be. Beautiful.
Oct 09, 2020
Jever Pilsener from Friesisches Brauhaus zu Jever
Beer rating: 81 out of 100 with 828 ratings