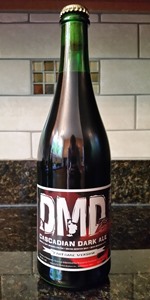 Aged through 2 years. Drank in the 23rd of February.

Poured into a wine glass.

A: Body is black, not pitch black because it has some crystalline hues. Still, the head is brown, medium retention and 3mm thick.
S: Aroma is still strong on hops like a Black IPA would be. I actually think this aroma is a conquest from a 2 years old aged bottle as it is very lively and very crisp. Quite an experience.
T: Taste starts off very sweet with tons of chocolate malt, moves on to a smokey tone that's very very mild and finishes with a crisp Centennial hop tone.
M: Body is medium. Carbonation is actually way over even after these years. Bitterness is mild.
O: Another great Fantome beer. These guys are so loveable.

From Tercertiempocervezas. In Teku glass. Playing Life is Strange Ep 3. In spite of the geyser and overfoam, it doesnt feel overcarbonated. The cascadian dark notes are very tasty and combines well with bb its lightly saisonesque character

this is tasty beer, but man, for 18 bucks, im not sure its worth it. there isnt quite enough of the belgian weird yeast profile to make this unique enough to warrant such a high sticker, and i think if its true black ipa you are looking for, fresher and cheaper and better examples are all around us. i expected some of the classic fantome bizarre elements, especially on the yeast side of things, but instead its almost too clean, like a mild (or ageing) black ipa fermented at least in part by some tame saison strain, a little spice to it, but fully in line and complimentary, not exotic at all, and well behind the dark roasted grain and bitter hop complexion. not quite as dark on the malts as some of these can be, it has a cool chocolate and bakers cocoa profile, which i like a lot, and more of a bitter and vegetal hop flavor than anything more citrusy or dank, which i also think works in here. love how effervescent and active it feels, creamy and lively at the same time going down, but it never really amounts to what i had hoped for. a quality bottle of beer, no denying, and some subtle differences in the yeast that make it sort of unique, but its not worth the price, and dont go expecting one of those one of a kind fantome beers, that level of originality is not to be found here. well made and very drinkable though...

750ml green glass bottle with the usual crown cap over a cork Fantome is known for (save for overcarbonated trainwrecks like Fantome Artist).

6% ABV. Imported to the U.S. by the Shelton Bastards.

This caught my eye not only because Fantome is behind it, but because interestingly it's billed as a Cascadian Dark Ale - not a style Fantome is known for. Let's see how it is...

APPEARANCE: No gushing after opening (a refreshing change from some Fantome beers). But overcarbonation is still indicated; the head easily occupies 80% of the glass even after a gentle side-pour. Head is a pale khaki - true to style - and has an inviting frothy soft consistency. Retention is quite good - ~12 minutes. Coating lacing adheres to the sides of the glass as the head recedes.

Body colour is a deep amber of average vibrance. I see no yeast or lees within.

It's an inviting appearance for a beer billed as a Cascadian dark ale, and doesn't betray its Belgian origins. Not as dark (i.e. black) as most beers in the style, but nevertheless appealing.

AROMA: Hops are overt - not something I'm used to noting about a Fantome beer. Hop character is mainly floral, herbal and resinous; it's pleasant, but most of the good Cascadian dark ales I've tried have been more in the piney/evergreen hop camp. Pale malt sweetness, chocolate malts, maybe a hint of roast.

The herbal character takes on more depth and complexity as it warms, suggesting a nuanced brew with hints of something from the licorice/fennel/anise family.

As far as I can tell, the yeast used was an American strain.

TASTE: Leans really herbal in its hop profile, which doesn't entirely work in this build. More of a pine needle/evergreen emphatic hop profile would work better. The herbal character is so rampant this would be an herbed ale if not for the fact that the herbal notes are coming from hops, not from actual herbs. Fennel is evident, if not licorice.

While the balance is uneven and the beer never quite comes together to feel like a harmonious gestalt whole, the "dark ale" aspects of the beer don't clash with the bright hoppy aspects of the build to the extent you'd find in many current expressions of the style. That it's not as imbalanced as most immediately elevates it above the majority of the beers in this style I've tried, but it's still rough around the edges.

Decent execution. Nothing about the texture accentuates anything from the taste, but this mouthfeel doesn't distract from or get in the way of the beer's flavours.

OVERALL: While it's better than many (if not most) American brewed expressions of the style I've tried, the style in question is still developing and this is ultimately a decent-but-not-great attempt at it. Certainly drinkable. On one hand, it's nice to see Fantome branching out and trying out new styles. On the other, perhaps Dany should stick to continuing to brew world-class expressions of the style he's best at (and that his brewery is famous for) - the saison.

A: Pours dark brown with a creamy tan head. Carbonation seems high but did not gush or look suspicious in the bottle before pouring. Good looking beer.

S: Aroma is light roast, a touch of sweetness but not much hop character. Smells like a typical porter.

T: There's some light roastiness and a tiny bit of yeast character but definitely would NOT have guessed this was a Fantome beer... The yeast character that makes these ghosts so strange is missing... There is however a touch of spice like other Fantome beers but basically this is too clean of a beer compared to their popular brews. Still, very very good!

M: Carbonation is perfect and feel is just right for a dark hoppy beer. The roast lingers and meshes so well with the bitterness, super satisfying.

This one hits the glass in deep, walnut brown hue with a big, tan and frothy head. The retention of the head is tremendous and the lacing follows suit. On the nose, this one is very similar to a German pilsner, with a relatively light and mineral heavy scent right up front. Towards the middle of the smell there is an introduction of some smokey scents and just a touch light caramel malt.

On the tongue this one basically follows the same path as the smell, just at an accelerated pace. Up front, the light and silner-like mineral flavors are there, but they are gone just as quickly as they appear. A light hops bitterness kicks in, but is also gone quickly to make way for the darker malts and smoke flavor. The middle and back end of the drink are dominated by dry, dark malts and a bit of smoke again. This is probably the smokiest beer that I have had that isn't actually smoked. Lingering flavor is the very dry dark malts. On the palate, this one is very highly carbonated and easy to drink. It is a little less smooth than preferred, but only due to the carbonation level.

Overall, a very interesting take on a cascadian dark ale. It is mostly pilsner-ish, but the dark malts and smoke flavors are very good additions. In the end, this is a very enjoyable beer.

My 3,000th written review...what a long strange trip it has been. Marking the occasion with a beer that pretty much symbolizes how my review history has gone.

The smell is roasty and earthen with slight nod in the direction of chocolate mingled with herbs and an overall vegetative feel. No typical Fantome funk, yeastiness or otherwise distinct noteable characteristics.

The taste is just excessively bitter like pine resin or black tar heroine. Lingering vegetal matter coats the mouth and leaves barely any room for other flavoring. Once the mouth becomes accustomed to how ferociously bitter this is, some charred grain flavor is present with some earth.

This is medium bodied and modestly carbonated. I love Dany and his experimental/whimsical brewing style but the recent fascination with hops and making his beers excessively bitter needs to stop. The hops/bitterness clash with everything else and it just doesnt work for me. This is a beer worth trying just to say you did it but id personally never buy it again when the rest of his offerings are infinitely more pleasing for my taste.

Fantôme DMD from Brasserie Fantôme
Beer rating: 86 out of 100 with 27 ratings