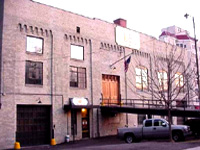 A very cool historic old building that is just a blast to visit. Best tour I've ever been on and our guide was absolutely hilarious. Food is good and comes very quickly. We had the award wining deep-fried cheese curds and the Rueben. Tried Eastside Dark and Snake Chaser, both are very good. We will make time to visit again on our next trip to Miwaukee.

Stopped in on a Thursday for lunch and a tour while in town on business.

Lots of enticing options on the food menu and the wurst plate was delicious.

Tour is a good deal and includes 4 six ounce samples and a pint glass to take home. Our tour was a little brief but I heard on the weekend they offer more in depth tours when they're not brewing.

Beers I tried ranged from a little below average to good. Was most impressed by their hoppier offerings.

By far the best thing about this place is the location though. Giant inviting beer hall and nice riverside patio.

Well worth the stop.

Bright golden beer with a light ale taste and a dark Mike's hard lemonade aftertaste. Citrus/orange scent, tastes like a soda with a kick. Refreshing summer beer. Definitely worth a try!

This place was phenomenal. The tour guide is totally worth the price of admission, the beer was solid, and the food was to die for. Easily the best pretzel and cheese I've ever had. The location itself is also one-of-a-kind, with an awesome riverfront patio.