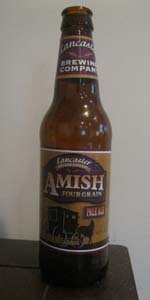 Reviewed by LCB_Hostage from Pennsylvania

This pours an almost reddish amber with a substantial head that dissipates quickly. Both the aroma and the taste are far maltier than I'd expect in a pale ale, without so much as a hint of hop bitterness to cut through the sweetness. If this had been presented as a classic British ESB, I'd probably rate it much higher, but it's far too malt-forward to qualify as a Pale Ale in my book.

As for the rather unique 4-grain grain bill, it didn't seem to make much of an impact that I could detect. I generally expect rye to bring a bit of a rough edge, yet this was smooth as could be. And the wheat did nothing to crisp it up. I'd be really interested in knowing what the proportions of the various grains were.

Like I said, had I been in the mood for something sweeter, I might have enjoyed this much more than I did. But the utter absence of hop character made this a disappointment as a pale ale. I'm not surprised they decided to retire this one.

May 12, 2013
Rated: 4 by TheNightwatchman from Pennsylvania