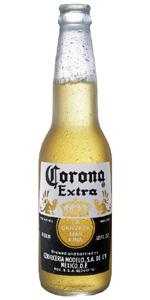 The first time I ever had a Corona was in Mexico, 1983 I think. It came in a square case. i.e. 20 bottles in a case, $4 for the case, $1 deposit.
The beer introduced in The USA a year or two later was a completely different beer.
Today, light yellow, light smell, light in taste, light feel, overall, light.
I'd say drink ANY other Mexican beer.

"Awful?" I dunno about that. Its certainly not amazing and pales in comparison to almost anything craft but if youre in your mid-20's, at a pool party and are trying to muster the courage to finally make a move on your crush who looks pretty spicy in that swimsuit, 8 to 12 of these bad boys with a lime popped in will help you get there.

Pours a lightly foggy golden wheat with a finger of white foam. Head retention is poor. Aroma is dank, resin, grassy hops and bready, wafery, crackery malts. Flavor profile is the same - crisp dank, resin, grassy hops with bready, wafery and crackery malts. Dankness is sharp and huge. Mouth feel crisp with a medium-thin consistency. It's a little prickly sharp. Overall, sharp and crisp, but the dankness cuts through everything.

Served in a plastic cup from a bottle.

Pours pale yellow with a 1/4 inch white head, which dissipates. No lacing.

Aroma is skunky, not much else.

While this is better than most AAL's, it's nothing to write home about.

L:. Pours a straw yellow, with a small fizzy head and a few specks of lacing.

S:. Mostly grain and corn with a strong skunkiness.

O:. Without a lime in it there are very few redeeming qualities to this beer.

Corona used to be one of my “go to” beers when AAL was pretty much all there was. When I saw it on the menu at a pizza place that didn’t have much selection, I figured “what the heck,” a nice cold Corona always went great with pizza.

Except that it didn’t. The appearance and odor were pretty much as I remembered: yellowish color without much head retention, and a malty odor without hop character.

And that was where things changed. The first sip was odd: not much grain or biscuit character in the malt taste - it was sort of dank and unpleasant, almost like wet paper, and it got worse as it warmed up. One of the very few times I didn’t want to finish my beer. Hopefully it was just that one spoiled bottle.

330 mL drank straight from the bottle. Very clear, pale straw color. Yeasty, cornbread aromas. Tastes weak of light grains and corn, with a gentle sweetness. Very refreshing on a hot day. If I can't find a Pacifico, this is my party go-to. For what it is, it does it well enough.

This is the beer I usually drink when I am at places that only have the typical beers sold in America. Be it restaurant or hanging out with someone. It's much more doable than 90% mainstream American beers.

T: A watery pale ale. Some malts, some hops.

F: Light bodied, not much going on.

T: A drinkable beer when all is bad. Not a reason to buy it but you could survive it...

Corona is in my opinion about as average as a beer can be. I've definitely enjoyed more than a few on a hot day or while relaxing on the beach but I feel outside of those situations this beer doesn't have much value. Unfortunately tends to be on the skunky side as well due to the clear bottle. Decent with lime.

24 ounce can. Very light straw color. No head to speak of. Nose is corn, grains. Taste is creamed corn, barley. This would probably work well on a hot weather day at the beach. I think this beer's rating depends upon the mood, temperature, where you are drinking it, and your thirst. For me sitting here in my home with the windows open and temperature at around 75 degrees, on a comfortable couch... It's a below average lager.

Aroma: Mild aromas of sweet corn, grassy fields. Some honey and lemon on the finish. (4.00)

Flavor: Less skunk on the flavor obviously. Allows the sweet, creamed corn to come through. Then some crackery pale malts, followed by a seltzer and soda flavor. Finishes dry with some cereal grain malts. (3.75))

Compared with Modelo: This one is two SRM lighter in color. It's slightly more zesty, grassy and carbonated. More of an adjunct lager profile.

I think the Corona Extra is the most smooth and tasty beer I've ever drink. The way people serve it cold and with a slice of lime in it just a way to have fun and chill as I like to drink. But you don't have to get your Corona with lime, it's your friend to go with a party. I can say it is a price/performance beer. Cheers!

Nothing really special here outside of the name. Is an above average AAL for sure though. Putting a lime slice in it does in improve the taste. I don’t think it is really special but there isn’t much wrong. I would suggest grabbing a six pack on your way to the next beach outing.

Just weak. Pale and meh. Good for a hot day, with lime and this is the ONLY beer you drink. Have anything with flavor prior and you'll be very disappointed in this.

Corn, with a light sweet note, a hint of grassy herbal hops

Among American Adjunct Lagers, this is just fine. Nothing to write home about, but assuming the clear bottle hasn't skunked it, you could do worse.

The iconic Corona Extra. What is there to say that hasn't already been said?

Pours a translucent pale yellow that generates a one finger head. It leaves no lacing and has poor retention.

Feel is over carbonated, thin and rather thirst quenching.

Hit or miss. If you can get it fresh it's good, but this stuff is prone to skunk up rather quickly so I personally don't buy it unless I absolutely know it's fresh and hasn't been exposed to direct heat or sunlight. Not terrible, not great.

Not the worst Beer but definitely not La Cerveza Mas Fina.
The look: bright light golden straw in color, Extremely clear. Poured into a glass yields a very thin head with minimal lacing. The cap goes away in seconds.
Smell: the aroma is similar to a Heineken but much more faint. there is a light lemon essence with a tad of grassiness.
Taste: Like a Party Beer. Very Inoffensive, light sweet with a tiny hint of hop. No Depth, No character. Rather boring. starts off with a Grainy sweetness and ends with a light grassy hop. No Bitterness at all for balance.
Finish is metallic.
Feel: Dibbs on feel. When ice cold, this Beer has a pleasant medium body and low carbonation.
Overall As stated, Its a Party Beer. No flavor, No Balance, No Character. You just drink it and dont think about it. If you get a buzz...that would be the highlight of your day.

In a bottle, sadly no lime. Pale clear gold. Smells a little grainy, taste is a little hoppy, a lot watery. I think this would be lovely on a hot day. Easy drinking.

I can’t believe I have never reviewed this brew. I have had it many times after I started reviewing beers, but never reviewed this one. It has never been my favorite, but it is a very popular and easy drinking brew well worth an adequate review. So here it goes….
Poured from bottle into a pint glass.
Appearance – The beer pours a light golden color with a tiny fizzy white head of foam. The head fades superfast to leave almost no lacing on the sides of the glass.
Smell – The aroma is light overall with some smells of grain and a bit of sweet corn and caramel. There is a little bit of lime and a hint of herb as well.
Taste – The taste begins with a slightly grainy and caramel taste mixed with a little bit of corn and herb. There is a little bit of a skunky flavor in there as well, likely due to the use of clear bottles. As the flavor advances some light lime and lemon citrus and a little bit of hay come to the tongue to leave one with a moderately crisp and grainy taste mixed with some lightly sweetened and somewhat off flavors to linger on the tongue.
Mouthfeel – The body fo the brew is light and crisp with a carbonation level that is average. For the style a little bit of a higher carbonation level would have been slightly more refreshing, but overall the feel is good and creates an easy drinking brew.
Overall – Like I said prior, this was never one of my favorites. I never discriminate against “big” non-craft brews (just see my other reviews) as I think in some ways they have access to ingredients and equipment that many small breweries don’t, but this is one brew I have never really loved and, while I am sure I will drink it at some occasion again (like Cinco De Mayo) I don’t recommend per se.

People are quick to hate the beer for what idk? No the beer does not need lime, just make sure to get a 24 oz clear bottle. Its a lager you can depend on wherever you go.

The lime makes this beer. I probably could not drink it unless it was sunny and/or warm outside. Would feel weird having one of these while in the cold. Not many other beers like this one, which I probably why I always go for it in the summer since it is pretty refreshing. Not sure why it gets so much hate. Definitely one of the better "mainstream beers". Honestly could not imagine drinking it without a lime or lime juice in it.

This is one of the first beers I really liked back when I was first trying beer. Probably most of my fondness for this beer comes from that nostalgia, but I do sometimes get it on a sale and put some limes or lime juice in them. I haven't encountered many lagers that taste similar to Corona. The only one I can think of is the Trader Jose (Trader Joe's discount version of Corona). It tastes clean, light, refreshing, you can detect grain, something like corn, hint of malts, but no hops. Lime really makes the beer though, but you have to add it yourself. That's the big downfall of it. It feels just how it tastes, clean and refreshing. It's a good party beer to share with groups, or keep in the bottom of the fridge to give guests when they come over (keeping them away from your more expensive microbrews).

I'm not a big fan of this beer, but I do like it more than the rating I'm giving it.
This is due to one fact, I can't drink it without a lime. Maybe this is because of how it's always been marketed. For me, if a brew cannot stand on it's own, it can't be taken too seriously.