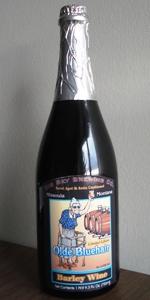 A: Pours a nice amber with a small tan head. No retention or lace.

T: The barrel is there in a mild way. Light vanilla with hints of coconut. Sweet fruit with loads of caramel and toffee. Rich sweet and good.

D: Awesome, Love this one.

Bottle 1497/1800. Dark caramel brown with apple red and Sunkist accents when the glass is backlit with the rising October sun. The khaki colored crown is more a loose collection of unsticky bubbles than a creamy slice of foam, which is a fairly common occurence when it comes to higher-ABV, barrel-aged beer. In all fairness, the head becomes melty-creamy in the end and stays at the thick disk stage for a prolonged period of time.

The nose is classic caramel malt barleywine (pale, crystal, and chocolate), with wonderful whiskey notes from the American oak bourbon barrels. More hoppiness would be nice, but this Limited Edition ale has been chilling out my cellar for the past year or so. Maybe the hops will make an appearance on the palate.

Barrel Aged Olde Bluehair Barley Wine tastes exactly like it smells... which is a very good thing. It's on the gentle side for the style, thanks to the original 75 IBUs being countered by mucho malt, and the ABV being 8.75% rather than double digits. That doesn't mean that this little old lady lacks punch. On the contrary.

Pale malt offsets chocolate malt, and caramel-crystal emerges as the winner. Having said that, pleasant hints of cocoa nibness are easily identified, more so than in most American barleywines. There's a ton of medium-dark fruitiness and the bourbon influence is right on the money. Caramelized sugar, oak and vanilla bean tantalize the buds with each sip. Thankfully, the beer isn't the least bit boozy.

The next highest taste score is tempting, but Bluehair doesn't have that extra gear, that extra certain something to get it over the hump. No qualms, though, about bumping the drinkability score. This stuff is disappearing more quickly than is advisable if I want to remain coherent enough to finish this review and still make sense.

With respect to mouthfeel, think aged English barleywine or old ale. In other words, it isn't thick and chewy and it isn't as creamily carbonated as your typical Belgian ale. No matter, because the beer's size and laid back bubbles work fine in combination, which increases (ease of) drinkability even more.

In my humble opinion, Big Sky is one of America's most underappreciated breweries. They have gotten more of my money (thanks to their outstanding IPA) than anyone else in this country over the past several years. Barrel Aged Olde Bluehair Barley Wine may not be transcent beer, but it's a delicous and drinkable effort that is well worth the purchase price.

A: Pours dark dark red with a huge tan head that fades to a layering and leaves a ton of lacing on the glass. Maybe a bit overcarbed.

S: The nose starts with big notes of dark fruits, citrus, toffee, and an odd rye aroma. Was expecting more bourbon and barrel notes in the nose and didn't get much.

T: The taste is a step up from the nose with flavors of toffee, red dark fruits, vanilla, bread, and malt.

M: The feel is medium with a bit too much carbonation.

O: I was expecting a bit more from this one but it wasn't too bad. It definitely improved as it warmed and I would love to see this with a few more years of age.

2011 bottle poured into a tasting snifter.

Pours a murky red amber color. This one looks to be super over carbonated. The smell is sweet. I'm getting dark fruit, caramel, and a hint of vanilla. The carbonation distracts from the taste, which is pretty good otherwise. Lots of caramel malts and some vanilla from the barrel. The bourbon is smooth with just a touch of alcohol burn.

2010 vintage picked up back in December.

App- A good looking mix of red and orange. A bit lighter than say MoAs or Abacus is but thats okay. A nice pillowy 1/2 in head formed and kinda fizzled away. Left a good 1/4" ring of bubbles around the edges. A couple dotted lines of cling were there but not much.

Smell- A well layered aromatic barleywine. Not overly thick with malts or overly done with citrus or even the bourbon for that matter. Seemded to have a bit of prickly nose like it was a lower end bourbon to me. Smelled nice and inviting and a bit warm. Sweet citrus and caramel notes with some oak and the bourbon were remaining notes.

Taste- The flavors meshed well on this one. Not overly done on the flavors like the nose. Well rounded and semi-smooth. Had that same type of prickly flavor from the bourbon. A little bit of dampened fruits and some sweet soaked malts were part of the flavor profile. The ABV is wrong on BA but the 8% does come through on the flavor adding a layer to the fruits and sugar notes.

Mouth- A bit of a thin- medium body with a medium high carbonation level. A bit prickly at moments with some popping bubbles.

Drink- The entire reason I went to Hamiltons was because this was on the bottle list. I was not dissapointed with my choice. I had this right after the Blind Tiger grilled cheese. Very good time. Would love another bottle to share with some friends again.

2010 Vintage. Bottle 598/3000. Pours a cloudy, dark red color with brown hues. Has a large almost-tan colored head. Scent is initially whiskey with a lot of dark fruit, honey, and toffee. Strong malt aroma and hints of booze. Taste is initially sweet malt, quickly followed by toffee and delicious whiskey! Very nice dark fruit and caramel flavors mix well with vanilla and honey. Very nice tasting beer. Alcohol burn comes in at the end. Mouthfeel is full bodied and nicely carbonated. Drinkability is fairly high, as this is a delicious beer. Overall, I'm very impressed by this. I've been fortunate enough to score a bottle of Ivan and this all in a month's time.

2010 vintage shared with the mrs in 2 hunahpu snifters.

a - brew poured an almost reddish orange with a finger or so of frothy off white typical barley colored head. The head stuck around for a while and lacing was solid sheets that coated the glass.

s - nose is big toffee. All toffee in fact. Some alc heat, but only glazed over the toffee dominating nose.

t - the oak cuts through the flavor imparting some soft bourbon notes and vanilla married to the toffee. Soft and non offensive, very smoothed over and the barrel is there but not in a big way so it still compliments the beer without taking over ,ike some barrel aged brews.

o - a nice enjoyable BA barley worth hunting down for the fans of the style. Smooth and easy drinking with a great toffee caramel flavor with vanilla-ing oak glazed over the top. Would have again!

Thanks to AgentZero for sharing this unusual brew.

A - It pours a sappy golden hue, and has a big foamy tan head that looks like pancake batter.

S - The nose is strange; it initially led me to suspect that the brew is possibly infected, but as I taste it, and smell it some more, I am convinced that it is just strange. Apricots, dark corn syrup, citric hops and vanilla come together in Olde Bluehair for an unholy communion of unfortunate proportions. Well, its not quite on the 'unholy' level, I just wanted to use the phrase, really.

T - The taste is more bizarre than the aroma; there is something 'off' here, though I cannot exactly put my finger on it. The taste is generally comprised of dried medium fruit, especially apricot and papaya, dry grassiness and rotten oak, grainy corn syrup notes, some weird chalky note and general disagreement between the incongruous elements of the flavor.

M - The feel is unspecial. It is sticky and soft, not tremendously enhancing.

O - Ha! This beer was on my 'wants' for a long time, along with Ivan; glad I didn't trade for this one in particular.