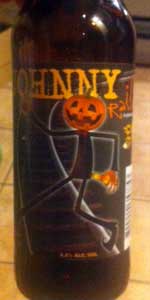 Looks clear. Maybe slight haze. Deep orange, but lighter. Not much of a crown. Zilch, or practically zilch, for head, as far as what stays. Almost half-an-inch, at first, but that's gone now.

Cinnamon and allspice with the idea of pumpkin on the mind. Sweet with a spicy richness that follow through. Pie spices, some pie spices, and tinges of maltiness. Harmonious, sweet, not offensive, but not very special.

Spices hit the tongue first. Thank goodness the beer is on the light side. Allspice, cinnamon, some clove, and some pumpkin. Nutmeg is lost in the mix, but present. Watery vanilla bent. Not much vegetable, as one might assume. Not a spice bomb, but still distracted by what's here. Unmemorable, but tasty.

Watery feel, or should I say, thin with a carbonation that wouldn't seem big on its own, but squanders any possibility of a good feel. Very average, if not slightly better.

A pumpkin beer with no real kick. Doesn't feel terrible. Has decent flavor, but it's spicy in the forefront. What were you expecting?

This one is, appropriately, orange, clear and bright. It's got a small, bubbly off-white head that shows above-average retention and decent spotty lace.
There's a good focus on pumpkin flesh here, countered by kitchen spices. The aroma isn't particularly sweet, and the flavor is slightly sweeter. The aroma holds well, but the flavor goes thin and flat at the end. Still, it holds fairly well and the components one should find in a pumpkin beer are here, if not simplistically.
The feel is crisp but not overly biting in a firm medium body with a pretty good smoothness to it.

The good part, it's not sickly sweet. The bad part, it has a weak pumpkin flavor and is a bit watery. I'm still searching for a really good pumpkin beer that is not overly sweet or artificial tasting. This is probably the best to date. It's just a bit faint, faint is a good way to phrase it. The pumpkin flavor is there but it's in the background which come to think of it is not a bad thing at all. My wife is picking up another 6 pack as I write this so, yes, we liked it.