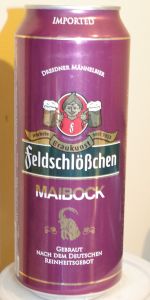 Appearance: Clear, deep golden body is surmounted by a dense, thick, and persistent head of about an inch and a half in height. Scores of fat bubbles drift lazily to the surface. Intricate thick and broken lacing adorns the glass walls.

Aroma: Noble hops dominate the aroma, with lots of malt, recalling a freshly baked rustic loaf of bread, and an undercurrent of sweet and spicy alcohol.

Taste: The taste opens with lightly toasted malt, with a slight undercurrent of sweet and peppery alcohol. The bready malt flavors are omnipresent. Midway through the taste, the noble hops present, offering a mild, slightly spicy bitterness. The finish is a gracious debate between the alcohol and hops, culminating in a gracious truce.

Mouth feel: Smooth and rich, very soft, with only a faint hint of carbonation.

Drinkability/notes: Wonderfully drinkable, pairs very well with German cuisine, like bratwurst and sauerkraut or schnitzel. If you are lucky enough to find this, its more than worthy.

Another Aldi brew. I knew I would not be able to get out to buy any beers today but I was at Aldi, so I decided to give it a shot (even though nearly every Aldi brew has been weak).

It pours very pretty - clear with nice foamy head and loads of lacing. The aroma is weak but clean. The taste is pretty middle of the road. I always say that beers made under the ancient purity laws preclude anything interesting. This is a good example of that. The aftertaste is sort of a funky bitter malty.

My ratings are pretty generous. Not recommended. I am not looking forward to the other three huge cans.

Poured into a Pint Defiance tulip. The body is a clear golden yellow, with a three finger white head. Aromas consist of baked bread, apple, grain, and a hint of baking spices. Flavors are the same, but there is some sweet toffee and a mildly bitter herbal finish. The feel is medium bodied with high carbonation.

Pick up @Aldi's whenever it comes in, worth every penny, which isn't much. Too bad it's not year'round. Happy tilting!

Love this beer. It has a smooth and fresh taste. A little sweet. Very pleasing.

Pours out to a brilliantly clear edmium golden, forming a tall rocky head with very good retention and solid lacing. Carbonation is medium, ~2.5 carbs or so. The nose smells like a maibock, freshly mown hay, delicate german spicy hops, freshly baked bread crust, grain husk, slight caramel. The taste is wonderful...crisp clean mouthfeel with a firm malt base with husk and cracker and hay, followed by a beautifully balanced medium to firm hop bitterness which lingers into the aftertaste and a soft suggestion of warmth and peppery alcohol. No off flavors or aromas, however the peppery alcohol and bitterness are perhaps on the top end of the spectrum for the style.

A very nice maibock. Definitely worth trying and very nice for the price. Better than most of the US versions I've tried. I'll be buying more of these and they would go great with some traditional german wurst and warm potato salad. Mmmm.

As pointed out by the other reviews, another exclusive import by Aldi grocery stores, but I believe BA has 2 listings for this brewery; one in Braunschweig, the other in Dresden, and I believe they're the same company. My can's label reads that it's brewed in Dresden, but has the same address listed by BA for both Feldschlößchen locations.

Nonetheless, I was excited to see a 4 pack of half liter cans for $6 -- might have to get more before the season is up. Dating on the can's bottom says canned on March 13, 2016 -- quite fresh. Poured into my .3l Becher glass.

L -- Clear, deep gold with a dense, creamy, off-white head that holds up very well and leaves sticky lacing as it slowly settles.

T -- Balance of big, sweet, bready malts and hot alcohol up front, the alcohol sort of takes over in the middle -- rather hot, but surprisingly not harsh. The sweetness and hot, peppery alcohol co-mingle into the finish and some herbal hop bitterness fights to be recognized. There's a mild fruitiness (pear or light apple) in the aftertaste and the great breadiness lingers.

F -- Mouthfeel is soft and smooth with a medium to lightly-robust body.

O -- While the alcohol is pretty hot in this beer, there seems to be plenty of residual sweetness from the malts to keep a good balance. Of note is that the malts in this beer stand out to me as being very similar to other beers I've had from this region of eastern Europe -- Pilsner Urquell in particular. Terroir? Maybe, but I definitely knew this wasn't a Bavarian beer when I first tasted it. I've had better, smoother Maibocks before -- from both Germany and the U.S., but this is well worth the price-point to give it a try and know up front that it's running a little rich.

16oz can. Poured out a clear, golden amber color with a small, tan head of foam. It smelled of caramel, toffee and floral notes. Sweet caramel and roasted malt with a mild bitterness.

Pours a nice, frothy white head that laces quite well. Delicious malt aroma with a touch of hoppiness. Crystal clear, golden color. Starts with an exquisite maltiness punctuated by spicy, floral hops. Builds in maltiness as the hop bitterness peaks to a nice medium bitterness. Finish is spicy hops over malt.

This is REALLY solid. An excellent example of a German Maibock. Great hoppiness and maltiness. As always, Aldi delivers!

Good comment by Steveh's review on the pilsner character of this maibock. The color is lighter than most maibocks I've sampled, and its peppery nature seeems more like a Bohemian beer rather than a Bavarian one. Still. the result is very good, and I'm running down to Aldi asap to see if I can pick up a couple more 4-packs of this fine lager. IMO, this is the best brew Aldi has imported to date.

The Maibock from feldschlosschen was decent. Trying it at a buddy's house. It poured a clear rich amber with white head that did not leave much lace. The scent and taste had white grape zeal. There was a boozy feel as well. The Mouthfeel was medium in body with good carbonation. Overall it's ok.

From the half liter can (bought at Aldi), pours a clear golden amber with a moderate head that eventually dissipates to a spotty layer and a ring. There is definite malt in the nose. Malty flavor, alcohol is just a bit noticeable.

I was pretty happy when I found this at the local Aldi. A pretty solid Helles Bock. Definitely worth the 6.99 for the 4 pack of ,5 L cans. Nice addition to their seasonal lineup

LastMalkieri from North Carolina, May 01, 2016
Maibock from Feldschlößchen
Beer rating: 85 out of 100 with 33 ratings