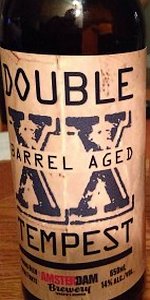 Bottle: Poured a pitch-black color stout with a small dark brown foamy head with light retention and some light lacing. Aroma of light roasted malt with some black chocolates notes with light whiskey notes. Taste is also dominated by sweet roasted malt notes with some black chocolate notes and a whiskey and vanilla finish. Body is full with nice creamy texture and medium carbonation with no alcohol. Very nice beer with smooth drinking features.

Black with a tan head, very thin ring of retention shows some leg.

Moderate to full body with a very drying finish.

Pours a thin head and black as night. Aroma & flavor of chocolate cake, sweet bourbon, cherries. Feel is a bit too viscous for my taste. It's heavy and i usually like heavy ones but this one i'm on the fence. I like it but not world class (for me).

Got this one from either peensteen or hopsolutely. Unfortunately I'm not as good at keeping notes as I once was. I blame (my) children... Anyways, big cheers to whomever it was!

APPEARANCE: A black pour yields a 1+ finger, looser, foamy, light tan, foamy head with half-decent retention. Black body with medium levels of carbonation. Head fades to a half wisp and ring, but only a ring remains until the end leaving no real lacing down the glass. A smaller head and a touch more carbonation that the base beer, but still a little too foamy.

SMELL: Lots of oak, coconut, vanilla, bourbon, milk chocolate, sweet cream and a slight note of roasted malts, Hints of maple syrup too, though that wasn't part of the equation. Bold and really nice.

TASTE: Bourbon, oak, vanilla and coconut up front. Lots of barrel flavors for sure. A big finish of sweet milk chocolate, coconut, maple syrup, toffee, and some bitter chocolate as well. Quite flavorful with some booze, bourbon barrel character and bitter chocolate lingering on the palate. Good stuff for sure.

PALATE: Medium-thinner body with higher levels of carbonation. A little airy and fizzy on the palate, goes down a bit fizzy and finishes mouth-coating. A bit of heat lingers. Unfortunately this isn't quite up to speed.

OVERALL: This is really good stuff. Really good, and I understand why people enjoy it so much. The barrel is very present and it kind of kills the hop profile of the base beer, but that's fine in this context. In the end, this is not really a barrel aged Tempest stout anyways, as much as it's a barrel aged Tempest stout on steroids. I'm not sure it needs to be quite 14% ABV either, but I get the point. In any case, the feel could use some thickening up perhaps, but the aroma and flavor are spot on here. I really enjoyed this and would love to drink it again. If you have the chance to try this one out, don't hesitate. I can only hope that future batches are just as good. Thanks again guys! Recommended.

UPDATE: Was able to drink the 2014 and 2015 batches as well. I would say the 2015 batch was the best of the bunch so far. Same excellent aroma and flavor as the 2013 but with a better head and a heavier, creamier feel. The 2014 was good too but the extra 2% really made its mark, believe it or not. Still some good character but it's a little harsher and boozier than I'd like.

A giant among men at 14%, it drinks with relative ease. Bold hop dryness balances with cocoa, molasses, vanilla and gentle roast notes, moderate and balanced sweetness without the sometimes cloying sweetness big beers bring (though, I think as the hops fade it might lean towards a sweeter version). A touch of oak and bourbon but far from dominating, each sip is in balance. A touch hot but for how big & how fresh it is, I would expect more - this beer is already punching at weight.

It compares favourably to something like GI's Nightstalker, without the citrus hops that beer brings to the table. It's big, balanced, drinkable, and has layers that reveal themselves as the glass goes down. There are few in Ontario, or even Canada, that match it in its category. Dear Amsterdam, please feel free to make this one again...

650ml bomber from mathieuc via CANBIF shared with Derek a few weeks back, Cheers boys!! From notes

A not quite jet black, short lived finger leaves no lace as expected from this monster, she’s got legs though, small particles and colour left behind on the glass

T much like the nose but the intensity gets pumped right up, more booze but it’s still in check, the barrels a little charred, very rich and intense

M thick and syrupy, silky, creams up from the bubbles, some heat but its pounding my chest and brain a little harder than my throat, I’ll be tasting this stuff tomorrow as I think some got stuck in my teeth

O I loved this one from start to finish; massive beer but you can drink it with ease

I’m glad I had a second glass to pour this stuff into but to be honest I think I could’ve taken it down solo if I had to. Very enjoyable beer and even in this scorching heat it was easy to drink, worth seeking out.

A - Dark inky black colour with a thin layer of light brown head.

T - Rich chocolate fudge, molasses, bitter roast, vanilla and anise with a massive charred oak presence. The bourbon is there as well in a pleasant way. Warming alcohol throughout. The massive bitterness becomes more and more prevalent as the beer warms to room temperature.

O - This was a massive beer and I think it will benefit considerably from a year or two of aging. Well done Amsterdam!

Jet black with a ring of tan head, no lace to speak of here. Smell is an initial mix of bourbon, oak and roast, vanilla and coconut, lots of dark chocolate and to a lesser extent coffee, while not extremely noticeable I'm sure this was generously hopped as it strikes similarities to a hoppy imperial stout at its core. Taste is big and roasty followed by a big but not overpowering bourbon flavour, vanilla and woody/oaky flavours roll in after bringing some chocolate and fudge flavours, a light alcohol is present but feels well below the 14% mark, a touch of bitterness, chocolate cake aftertaste. Lightly carbonated, full body, oily and rich, big chewy body. Solid stuff, surely one of the better BA stouts to come out of Ontario in a while.

Bomber tasted thanks to igeunard

Appearance - Dark brown colour with an average size frothy brown head. I can't make out the amount of carbonation showing and there is some great lacing. The head lasted for around 5 minutes before it was gone.

Taste & Mouth - There is a below average amount of carbonation and I can taste malts, chocolate, and vanilla. There is also some coffee, anise, and some bourbon. There is also quite a bit of a burnt/roasted flavour.

Overall - The 14% ABV seemed really well hidden all things considered. The taste is along the lines of a regular RIS.. nothing over the top like a Dark Lord etc. This is a beer that I would love to see at the lcbo some day.

Brewed Feb 14, 2013 and bottled November 4, 2013. This is a stronger version of Tempest aged in Four Roses bourbon barrels for 9 months.

The bourbon is quite strong in the nose, but not excessively so. Oak and vanilla. Under the bourbon is some roasted malt, and I think I can smell the rye to some extent, a bit of a spicy scent. Hard to tell underneath the bourbon.

The taste is good, although there is a lot of alcohol heat. Bourbon and its accompanying flavours are right up front. The base beer is certainly big enough to handle it, though. Roasted malt, some spicy rye flavours, molasses and chocolate.

Overall, very good, but the booze is a bit intense. If it calms down a bit with age it would be an improvement.

Smell: The aromas definitely give out hints of roasted malts, chocolate, coffee, toffee, bourbon, licorice, woody oak and some vanilla.

Mouthfeel: It has a low-med carbonation with a very nice overall balance and feel.

Drinkability: It's a very smooth drinkable beer accompanied by great flavors and aromas.