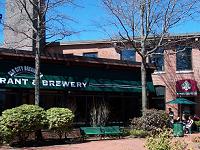 Stopped by this place yesterday while at Pumpkinfest. Selection seemed to be ok, though they had a coffee stout that while it was listed on the beer list, was somehow not on tap. A bit of a disappointment and because they were out of Pumpkin beer and Stout, I could not get a growler of either.

Still, the atmosphere was nice. The place is a bit more crowded than I thought but then again, it was incredibly busy yesterday. Props to the bartenders for hanging in there, despite the insane amount of orders. The taste of the IPA I had made it worth waiting for the growler to be filled.

Didn't eat the food there and I thought the beers on tap were a good start for any brewpub. Nothing wrong with a beer list that has two kolschs, a fruit wheat, stout, IPA, Pale Ale and a Pumpkin beer.

Not too bad of a place and I want to go back someday when it's not that busy so I can really enjoy the place.

Trendy looking brewpub with outdoor patio across from casino. Small bar seats 10 to 12 people and multiple dining areas with tables and booths. 10 beers on tap, I had the pale ale, but it tasted very much like a lager. Service was efficient and food reasonable.

I picked up a growler and didn't have any food. The menu look like a pub menu. The was some nice outside seating. The bartnder was friendly and knowledgable. Next time I am in Keene I plan to try the food and more of their rotating beers.

Very busy place - wait staff seemed to be stretched a bit thin. They have a large menu and the food we ordered was good. Beer selection was not very big but covered many styles. Location is cool and people were friendly.