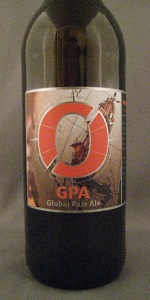 Rated by Poupae from Thailand

3.15/5  rDev -18.6%
look: 3.5 | smell: 3.5 | taste: 3 | feel: 3 | overall: 3
Poured from 33 cL can into shaker pint glass.
A: Pours a slightly hazy dark yellow hue with 1/2 inch off white head that quickly settles to a thin skim.
S: Bright orange and tangerine with pine resin and caramel malt.
T: Caramel malt overpowers the citrus and pine hop notes.
M: Light body. Off balance with strong malt sweetness compared with the hop notes.
D: Not the best for style. Over did it with the malt a bit.

3.56/5  rDev -8%
look: 3.5 | smell: 3.75 | taste: 3.5 | feel: 3.5 | overall: 3.5
This is a beer to really test your taste buds with it's 13 different hops from around the world.
Pours a dark golden colour with a white very foamy head. Aromas of tropical fruit, fruity orange, citrus and orange peel. Tastes of citrus, tropical fruits, orange, pine, mango, passion fruit, guava, grass & peppery herbs with a medium bitterness leading to a not surprising fruity aftertaste.
I wasn't expecting the world and in truth it's decent, but there is far to much going on & it doesn't stand up to the other beers I've tried from Norge O.

This beer pours a rather hazy, medium golden amber hue, with two chubby fingers of puffy, rocky, and vaguely creamy ecru head, which leaves some loosely layered sudsy lace around the glass as it quickly sinks away.

It smells like a five-car pileup of citrusy, leafy, piney, earthy, and woody hops, a whole lot of blended, savoury bitterness leaping straight out of the glass, to assault my olfactory senses with the good sense that I clearly do not possess. There's also some crackery pale malt in there too, but neither Nøgne Ø nor I care all that much to speak of it. The taste is gritty pine and leafy hops at first, shadowed by a stripped-down grapefruit and mandarin orange fruitiness, a strangely boozy, floral leafiness, and more biscuity, lightly caramelized, and bready pale malt than the powers that be want to be publicly known.

The bubbles are quite light and fluffy, barely making any sort of inroads into my upper and back palates, the body just on the lee side of medium weight, and actually smooth, incredibly, given that special blend of 13 hops, and well, just 13 hops. It finishes fairly dry and hoppy, sure, but still somewhat malty, in a lingering bready sense, making this less than the astringent bitter-ball that I might have been anticipating.

A pretty tasty APA, the many, many different hops doing well to merge into a singular entity of bitter, fruity, and woodsy goodness, one aided and abetted by the apparently unloved malt backbone. I'm also glad to see that they kept this one at session strength, in order to keep that other pushy quotient from interfering with the hop gang-bang that is the Global Pale Ale.