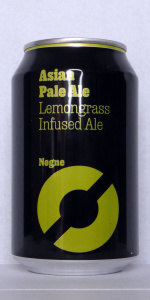 A: Poured into a tulip. Possibly can-conditioned. A deep amber colour with some faint floating sediment and very low carbonation. Produces a smallish head of frothy white foam that settles and dissipates rapidly. Uninspiring.

O: OKish but doesn't make much of an impact. Subpar looks - the head retention needs work. Aroma and flavour are alright with some lemongrass hints but not very distinctive. Body is OK. Drinkable and balanced but unexciting. Maybe try a fresh can?

Citrus, dank pine as in pine wood, caramel, a rustic cupboard like almost dusty quality, and a hint of lemongrass and bitterness on the finish.

Found at Beer Lab, Chiang Mai, drank here Nov 6th, 2015. Celebration of my parents visiting me in Asia for the first time in 19 years! Good brew, great label, not overly lemongrass like, but light and uniquely artistic idea.

Reviewed by charlatan from Scotland

2.91/5  rDev -20.5%
look: 3 | smell: 2.5 | taste: 3 | feel: 3.25 | overall: 3
Cask version brewed in conjunction with Caledonian for 'spoons. Gold to copper coloured beer smellin gof lemon, orange and cleaning fluid. Has me thinking I hope this isn't skunky. A surprisingly sweet start precedesa combination of tangy generic citrus (maybe I can pick out some lemon) and rater stale biscuitiness. There is welcome incipient leafiness in the aftertaste towards the end of my half pint.
Sep 19, 2015
Rated: 3.25 by Howlader from Canada (AB)

This beer pours a hazy, medium copper amber hue, with one skinny finger of weakly foamy, and mostly just bubbly dirty white head, which leaves some eroding Hoodoo lace around the glass as things quickly subside.

The carbonation is quite tight and crackling in its forceful frothiness, the body medium-light in weight, and so-so smooth, the lemon, grassiness, and yeast all poking and prodding here. It finishes rather dry, the wheat and rye guest malts having their say, alongside their herbal cohorts, as well as the lingering worldly hops.

An enjoyable enough, beefed-up pale ale (in flavour, not in ABV), with lots of different, and at times challenging interplay. However, I can't see this going all that well with the proclaimed 'Asian' food, at least not the kind I prefer - the lack of overall sweetness here wouldn't satisfy my typical spicy wanderings around that vast continent's cuisine.

Reviewed by jonb5 from England

A: Golden, cleared up eventually but took a while, decent head retention, lots of lacing.

Reviewed by JaimeLondon from Brazil

4.14/5  rDev +13.1%
look: 3.75 | smell: 4 | taste: 4.25 | feel: 4 | overall: 4.25
Nice norwegian beer made with rye.
It looks just line a common [good] APA.. golden/orange color, not very opaque, and a nice whitey foam that leaves a nice lace.
Well. the rye makes a big difference in the aroma and in the taste - you may find yourself in the middle of a meadow... Ok ok to the point.. aroma and taste are really nice, full of spices that you usually don't find in a beer. And I guess they call this an "asian" pale ale because there are strong notes of bamboo in the aroma and taste; citrus, speacially limon, also can be found easily, as well as the hops; maltiness is not very high, but the rye gives a different feeling here.
Body is at average; and the beer is somewhat efervescent.
Bitterness is huge, and it remains in the mouth for a nice amount of time.
Due to the rye, in the end of the degustation, the beer is extremely turbid; maltiness and body becomes really high; etc. It's better on the first glasses..
Nevertheless, is a great beer.