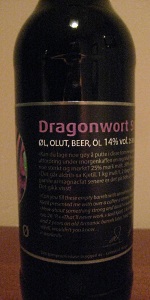 A pour that was probably too smooth for its own good, yields about a half finger of relatively dark brown head into my tulip glass. The majority of the head fades quickly, but some nice film is left on top of the body. The body is 100% black, with no change in color even when held up to the light. Visibility is zero. This is a serious looking beer, we'll see how the lacing goes.

Aged in "Armagnac" barrels, which is apparently a French brandy. I am not too familiar with brandy. Anyways, the nose is rich and...mostly lovely. Very sweet, extremely malty, chocolatey. On some sniffs you get a drier, umami, soy sauce aroma, which is the one thing I don't like in this style. I don't think I'm imagining things when I pick up some deep red wine characteristics hidden in here, woody, reminds me of whiskey barrel beers. Molasses aromas are here as well. A small booze smell, but it's mixed well with the other aromas. Perhaps even a dark, dry fruit thing going on here. I don't looove the aroma, but I think that largely has to do with the style. Once you get these beers sitting for months and months, and over 10% they get hard for me to appreciate the big booze nose, sweetness, and umami. With that being said, this is damn nice for the style, the amazing complexity here bumps this up to at 4.5

The flavor is more in your face. Definitely not as forgiving as the nose. But damn, so complex. Very roasty from start to finish, with lingering roastiness. Almost a burnt, campfire flavor, but in no way to the level of a rauchbier, not over the top. It's almost a little festive, maybe not quite "spicy" but it makes my tongue tingle, makes me think of cinnamon. For sure a little bit of that sour, umami flavor, but it's well mixed with the rest of the flavors. Not terribly chocolatey at all, if it's there, it's a very dry chocolate. The flavor is definitely way drier than the smell entailed, there is a sweetness, but you have to look for it. Overall a fantastic flavor, the roasty, burnt flavor is turning into a more approachable woody flavor, that is actually very nice. Slightly astringent on some sips, but overall the alcohol is so well hidden it's scary. Honestly, as this beer warms, I can't say for sure that it's not as good as the aroma. I keep getting this woody, spicy, almost cinnamon flavor, it's really killer. Anyways, it's a great flavor, especially for the style.

The mouthfeel has an extremely light carbonation, though not flat. While it is flirting with too low, it definitely works here. The mouth is sticky, not quite chewy. It's a rich beer that only coats your mouth for a second. Still, the body is deceptively thin sitting in my mouth, other than it being sticky. I would consider it being thin a bad thing, if it didn't reflect how damn smooth and easy drinking this 12% beer is. Overall a good mouthfeel, it works.

The drinkability isn't even ok, it's....scary how well this drinks. It literally drinks like 6.5%

The appearance turned out ok, I didn't get any lacing, oh well. Other than that, the color was impressive, but overall there wasn't a whole lot to write home about. Super dark, but that doesn't necessarily make it "good".

Overall this beer is great. Not my style really. Perhaps that's why it's getting such a high grade, cause it's not my style, and I like it. Anyways, it's a huge, complex, and tasty beer.

scents of anise and rye bread and I get the tarragon

complex beer here, anise, rye and Armagnac are present as well as the malt that gives the rye

for me, a different style than say old Rasputin because of the Armagnac barrels and anise, but no real big chocolat notes for me, but great stout

Bottle: Poured a pitch-black color stout with a large dark brown foamy head with good retention and some lacing. Aroma of light roasted malt with some lactose and Armagnac notes with nice black chocolate notes also noticeable. Taste is dominated by nice creamy black chocolate notes with some roasted malt with just the right amount of Armagnac notes from the barrel. Body is smooth with nice creamy texture and good carbonation with no apparent alcohol. Solid offering with nice barrel-aging notes.

330 ml bottle. Inky black, tan head that faded quick. Alcohol, liquor (I assume I am smelling Armagnac), sweet malts, chocolate, oak. Flavors are much of the same; I have never tasted Armagnac but I bet that's this dominant flavor I am getting. Alcohol notes are a bit too harsh. Pretty sweet.

The smell is rich. The brandy is strong, but there is a bunch of caramel, sweet malts. Oak.

Once tasted, the brandy is even stronger. A shame, because the heat is too much and overpowers the beer to a disappointing level. The flavours are good; brandy, roasted malt, anise, caramel - but the alcohol burn is too strong for it to be enjoyed very thoroughly.

The beer has a lot of very good qualities and could be excellent if the heat was dialed back. Perhaps more time will improve it, but it's pretty intense.

330ml bottle, brewed in Nov 2012, and soon to be featured on Game of Thrones, if it already hasn't, I would imagine.

This beer pours a solid, light-diffusing black, with no highlights, no edges, no-how, and one very skinny finger of creamy, mildly foamy brown head, which leaves essentially nil in terms of lace anywhere in the vicinity of the glass as it quickly blows off.

The bubbles are surprisingly quite active and thorough in probing a few of the darker, unexplored corners of my palate with their tenacious frothiness, the body a solid medium-heavy weight, and tentatively smooth, both alcohol and hops (I know!) abetting the wrongdoing here, especially the dent in the otherwise ascendant creaminess. It finishes sweet, the cocoa, caramel, booze, and fruitiness all heightened, and loving every minute of it.

Well, I can't say that I've ever tried the brandy featured in the barrel usage here, but it comes across pretty typically in its basic woody and vinous fruity nature. Overall, this is strong, yes, but moderated just enough to keep us more or less between the ditches, and able to appreciate its wild, uncompromising (yeah, I said it) virtues.

Dragonwort (Armagnac Brandy Barrel-Aged) from Nøgne Ø
Beer rating: 92 out of 100 with 21 ratings