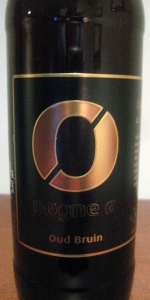 This smells like bready malt, red wine, light acidity, and some dustiness.

This feels a little bit musty and dusty on the back end, with not quite enough rich malt character as I tend to prefer in this style. There's a little bit of acidity, some sweetness, but not a ton of overall complexity.

This is light bodied, pretty crisp and clean, with a decent enough drinkability.

This isn't in the upper echelon for the style, but I'm still happy to have tried it.

Smell: The aromas are light with mild sourness and chocolate.

Taste: It's a bit musty in the flavor with low chocolate and mild sourness. It takes like there might be some bourbon in it, but the flavor is muted.

Feel: It has a medium body with mild sourness.

Overall, the aromas and flavors are it bit muted.

Rated by JiffyJeff from Canada (AB)

Reviewed by emincems from Turkey

This beer pours a clear, medium red-brick amber colour, with two fingers of puffy, finely foamy, and sort of bubbly beige head, which leaves some low-lying iceberg shelf lace around the glass as it slowly ebbs away.

The carbonation is fairly understated in its wan frothiness, the body a decent middleweight, and more smooth than I might have initially considered. It finishes off-dry, but moving in the latter direction, with the funk-addled dark fruitiness escorting us out the door.

Overall, a rather disjointed, and hard to really get into version of the style, with the funk once again fucking with the beautiful sour fruitiness found in its betters out there. Not really worthy of seeking out, I'm afraid.