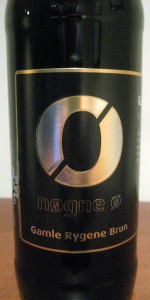 This beer pours a clear (I think), dark orange-brick brown colour, with two fingers of puffy, tightly foamy, and fizzy beige head, which leaves a low-lying ebbing berm of lace around the glass as it gently subsides.

The bubbles are fairly unassuming as one might expect, what with their plain Jane frothiness, the body a decent medium weight, and more or less smooth, neither the expected yeast nor alcohol ingress actually materializing. It finishes off-dry, the lingering caramel, musty fruitiness, and booze all playing nice enough together.

Overall, a fairly well rendered version of the style denoted here, even if it doesn't exactly match up with what the brewery (or their marketing arm) intended. Old-seeming, yes, with lots of red wine character abounding, as well as a pleasantly masked 20-proof alcohol measure. Good stuff.