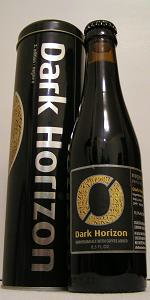 Notes: Brewed in March 2008 with Grimstad water, malted barley (brown & smoked), sugars, coffee, hops, yeast. Sat, untouched, in conditioning tanks until August 2010 when it was dry hopped (with Nelson Sauvin hops) and dry "coffeed" (with Den Gyldne Sterke espresso). After a month of dry hopping/coffeeing, it was bottled/released in September 2010.
View: Beers
Reviews: 114 | Ratings: 205 | Log in to view all ratings and sort
Reviews by output01x:

Poured from a 8.5 oz. capped bottle (No Date) into a snifter glass.

A vigorous pour yields a faint dusting of off-white head that disappears nearly as quickly as it formed, leaving only a thin foam ring. The body is a dark brown, similar in color to the bottle from which it was poured. Light seems incapable of penetrating the thick body. Very little lacing can be seen throughout consumption with literally none standing the tests of time or gravity.

The first recognizable aroma is concentrated soy sauce with hints of teriyaki sauce. A strong alcohol aroma makes sure to sting the nostrils at the end of each sniff. Digging deeper reveals lots of dark fruit notes, including plum and raisin. Also noticeable is molasses and vanilla. The nose is certainly deep and complex, but not necessarily enjoyable.

Sweet dark fruit flavors impact the tongue immediately, giving notes of sour grapes, bruised peaches, fig, and raisin. Swirling the beer around the mouth allows these flavors to come out a bit more but also calls forth flavors of dark chocolate, fudge, molasses, and caramel. Swallowing the beer brings forth a stampede of sugary sweetness, like the last sip of a neglected coffee that had too much sugar added and hadn't been stirred in a while. This is soon followed by an overpowering alcohol heat that envelops the entire mouth, laying waste to all the previous flavors. As this quickly fades, the flavor of semi-melted sugar reemerges and lingers on the palate between sips.

The body is nearly as thick as motor oil. It is sticky and messy, like the syrup from a jar of maraschino cherries. The sugary sweetness coats your mouth and remains there indefinitely. The carbonation is not overly noticeable but definitely plays a big role in keeping this beer drinkable. At such a high alcohol, the thick and sticky body is expected and any less carbonation would probably make this beer untouchable.

Appearance: pours a nice black color with a beige head. Sadly that is where the pleasant feelings end.

Smell: smells like smoke and diabetes. Tragically sweet aroma. I actually want to throw up a little bit just by smelling this beer. There are some good components going on - I get hints of coffee and chocolate along with the smoke - it's just too difficult to actually enjoy them behind the sickly sweet aroma.

Taste: my god this is actually the sweetest anything I've ever consumed. I thought southern tier creme brûlée was sweet, then I drank this. I hate it. I can't drink it. Why did I pay this much money for this?

Overall: literally the most disappointed I've ever been in a beer and the most horrifically sweet beverage I've ever tasted. I should also say that I'm usually not too thrown off by very sweet beers. Overall, I enjoyed Southern Tier Creme Brulee (and actually thought the sweetness was more restrained than I anticipated given what I had heard prior). I loved Founders Big Lushious. I like Dark Lord. But this? This is just so far beyond palatable that I can't comprehend how anyone would enjoy it. Given that it is aged almost 5 years at this point, maybe it got sweeter over time? (although logic tells me that the sweetness should have actually mellowed)...

Bottle from The Wine Seller in a neat little can sleeve. A bit pricey. Pours dark black with very little head at all. Aroma of wet dog and booze, some roast. This one comes on hot! Very warming on the palate with some burnt chocolate and musty wet-dog like booze. Heavy on the palate, low carbonation, bordering on a dark barleywine flavor. This was okay, but a bit much for me even though I tend to enjoy stronger beers. Tough to choke down more than an ounce or two.

I felt obligated to write a review myself after reading such piss-poor reviews of the beer.

I am under the impression that the quote from the can which reads "...we cannot tell you what it tastes like. You are the boss of your own senses!" rings very true for this beer.

Intoxicating aroma of dark fruit, chocolate, and coffee. All the commonplace stout aromas, however, much more prevalent is brown sugar and molasses with a touch of tobacco. Almost no carbonation, both in appearance and taste.

Taste is like subdued maple syrup, but in a good way. Sticky, with a thin mouthfeel, not chewy. Reminds me of Founders CBS because having both make you not want to finish the beer just for the sake of continually smelling the glass.

Personally I'm a huge fan of ports and meads, and this is very reminiscent of those beverages, so to me this beer was delicious. If you don't have a sweet tooth, you may not want to shell out for this. I got mine for $25 so not cheap for a single 8.5 oz bottle.

Easily placing this In my top 10 of imperial stouts.

Looked good. No trace of carbonation. Post fermented wort has more carbonation than this. The smell had a little coffee and chocolate. Everything else about this beer is boozy, cloyingly sweet, and syrupy. Very limited review, because after one sip I had to pour it down the drain. Is this brewery that inconsistent with its' product or did they just turn a blind eye to a bad batch? They need to have a warning on the label, "1 in 5 bottles are horrible, hope you choose wisely."

On the "1001" and a lot of people seem to think it doesn't deserve to be there. I thought it interesting when I drank it, but clearly too strong.

Bottle: Poured a pitch-black color stout with a dark brown color head with good retention and some lacing. Aroma of sweet malt with notes of black chocolate and light coffee is quite enjoyable though also quite intense. Taste is sweeter then anticipated with some black chocolate notes and some light liquorice notes as well. Body is full with an oily texture with good carbonation and no apparent alcohol which is somewhat surprising considering the ABV. More of a sipper then something I would drink on a regular basis.