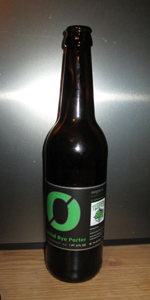 "Imperial Rye orter is a dark ale with lots of character, brewed by Spike and Kjetil. The best of both worlds!" Brewed in the style of an English Porter. This is a one time collaboration between Nøgne Ø and Terrapin Beer Company, released in early 2012. Still available at a few bottle shops in the area.

Poured from a 16.9 fl oz. bottle to two snifters. Served north of 52º Fahrenheit.

(Appearance) Pours a creamy thick head of a moderate viscosity and a buttery mocha-cream complexion. Body color is a near black dark brown. Retention is above average. Lacing is medium thick and curtained but doesn't stick. It certainly falls in line with the appearance of porters but isn't overly pleasing. 3.75

(Smell) Aromas of rye bread, medium caramel grain, a moderate bittersweet acidity of an English Ale yeast origin, and a hint of dark fruits provide a subtle tartness. Licorice faintly peaks amongst moderate roasty cocoa nibs and a dash of earthy hop resin reveals with warming. Aroma is fair accessible like most English porters but carries an enhanced complexity and malt depth: one could certainly discern this to be a porter of the "imperial" caliber collectively based on the parts of the whole. Rye adds a touch of malt complexity but blends well with the malt bill. Potency is medium+, 3.75

(Taste) The flavor has similarities with the aroma: Toasted grain malt, with a touch of rye bread, licorice and a trace of black malt. A moderate earthy hop bitterness and a subtle yeast character add some fruity ester complexity to the medium thick finish. Rye adds to the thickness of this beer but otherwise doesn't redefine the beer much. Altogether it's a very drinkable and flavorful porter with plenty of complex flavors to enjoy. 4.25

(Mouthfeel) Texture is medium-viscous with a moderate slickness and a mellow carbonation presence for a slight touch of creaminess. Balance is nearly equally bitter as well as sweet, with a touch of acidity as well. Body is medium/high for a porter and medium/high overall. Alcohol presence is low. 4.25

(Overall) This is a thoroughly enjoyable collaboration between Terrapin and Nøgne Ø. While in most regards as simple and drinkable as a porter is, the malt base and matching hop profile added a welcome complexity without shortchanging this beer's drinkability. It's a solid-built porter,and not one I regret trying. Recommended for hoppy and complex English porter lovers. 4

Pours a jet-black colour with reddish-brown highlights, topped with one finger of foamy, khaki-coloured head that steadily seeps off over the next 5 minutes or so. A thin layer of soapy film is one of the two primary remnants, together with a thin, creamy collar. Modest lace deposition; it's an attractive porter, for sure. I'm getting prunes/plum and dates on the nose, with notes of dark chocolate, cocoa, treacle, rye grains and spicy rye bread; just a faint hint of coffee grounds. Nice mix of dark fruits, rye and roasted malt constituents in the aroma.

A beauty of a porter - bold flavours, with good balance. Tempered molasses and caramelized sugar sweetness are a consistent background presence, with prune, plum and fig fruit flavours joining early on. Bread crusts, spicy rye grain and roasted malts figure in strongly on the back end, supplying rich fudge chocolate flavours and a hint of coffee bitterness. Herbal licorice, earthy hops and moderate ethanol heat at the finish, lingering into a roasty, bittersweet, persistent aftertaste. Full, viscous body with a thick, slick, oily texture and very subtle carbonation just past the threshold of detectability. Gives you the sticky lips. The warming qualities might implore you to pace yourself, but it's difficult to stop sipping something this delicious.

Final Grade: 4.27, a fantastic A-. Keeping my intensely pro-rye beer biases in mind, Nøgne Ø Imperial Rye Porter is one of the best collaborative efforts I've had the pleasure of trying in recent memory. Not too sweet, not too boozy, and certainly not smothered in adjuncts - this is dark beer in its purest form, with the addition of rye ensuring that it would be right up my alley from the start. I will definitely be picking up another bottle (or two) for the cellar, because this is a beer that I know I'll want to drink again.

A really nice strong porter. The rye provides a bit of a spicy flavour, but it is not overwhelming. Otherwise, a nice, smooth blend of chocolate, roast malt and vanilla. Really easy drinking for the ABV. Nice and rich without being heavy.

Pours deep dark brown with one and a half fingers of thick tan head. Slight lacing.

Nose is roasty, coffee and sweet.

I think this is the first rye porter I've tried and it's really well done. A good blend of the sweet malts and sharp rye. It's quite tastey now but worth saving a bottle to see what a year or two will do to it.

A - Pours very black with a good amount of a tan head. Great lacing, sticks to the glass.

S - Getting a good helping of roasted malt and rye.

T - The taste really follows in line with the smell. Not picking up too many different characteristics.

M - Really coats your mouth, heavy on the palette and low carbonation.

T - It really follows in step with what the label says. But, it's a really nice and well done beer.

Poured into a tapered Guinness pint glass. No freshness date.

A- Pours a 99% opaque black color with a 3/4 inch light brown head that retains quite well before reducing to a thick ring around the edge of the glass and a big center patch of surface foam. Semi-resilient lacing leaves clots behind on the glass.

S- Chocolatey aroma with a bit of spicy rye and a hint of caramel.

T- Dark roasted malt, milk chocolate and rye all very well-balanced and on the sweeter side which is a plus for me. Alcohol is incredibly well-hidden beneath the deliciousness bringing the drinkability to dangerous levels.

M- Semi-creamy with a robust body and medium carbonation.

O- Plain and simple but incredibly effective. When the Nogne boys and Terrapin boys put their heads together, you get an awesome Norwegeorgian ale.

Imperial Rye Porter pours a dark brown almost black with about a couple of finger's worth of head. There is some lacing visible as you drink. The smell is mild, but you can pick up some vanilla, roasts and some spice. Taste is quite agreeable, with the roasts and cocoa flavors being up front, and then there is a touch of vanilla sweetness followed by a nice rye spiciness. Feel is a little thin but sticky, and the carbonation is about medium. The 9% abv is well hidden.

A nice beer, more than I was expecting in terms of flavor and it turns out this is a really nice sipper.

Pours a wonderfully deep chocolate/raisin brown. Just enough light gets through to keep it this side of black. With a thin beige head.
Smell is dates/raisins, whiskey cake, molasses. Veers toward a barleywine like smell, or an old ale. Very rich, very complex, benefits from rising toward room temperature.
Taste is surprisingly smooth compared to the smell. Roasty/spicy malt along with some mellow dark chocolate notes.
Mouthfeel is pretty spot on for a porter. In spite of a big nose and a deep dark color the body is very mild and smooth. Drinks like a proper after work beer for 3 or 5 pints.
Truly great beer here. If you're a fan of darker beers at all you will enjoy this.