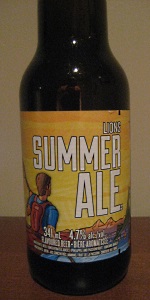 Notes: Like the twin peaks that shine above Vancouver’s coastline, Lions Summer Ale beams with the bright, refreshing tastes of summer. Lively tropical fruit notes balanced with an easy-going personality are perfect after a paddle on the water, a hike up to your favourite lookout or wherever your next sunshine adventure takes you.
View: Beers | Place Reviews
Reviews: 5 | Ratings: 18 | Log in to view all ratings and sort

Straw and slightly hazy with moderate carbonation, and a finger of white head.

The taste is slightly tart with peaches, grain, apricots and berries. Slightly herbal as well.

Got this at LCBO, drinking in New Hamburg, ON, March 22nd, 2018. Surprisingly refreshing brew.

Appearance - A rich golden colored beer, plenty of haze and topped with a titanic two and a half fingers of head. Great retention and loads of sticky lacing cling to glass for dear life,

Smell - Vegetative and metallic notes with hints of earthiness. Cooked beans maybe. Very subtle hint of sweetness in the background.

Taste - Thin with little flavor. Subtle bit of apple and pear with a weird funky artificial sweetness. No pineapple or passion fruit to my tastebuds. Tatse is quite a bit better than the nose. Fruitiness does show up more after a few sips.

Overall - It's mostly beer as opposed to the radlers with copious amounts of fruit juice added, but has enough fruit juice to make it fruity (but not to the desired flavor), but the base beer is weak and thin so we're left with a muddled mess of disappointment. Not that i was expecting a world beater, but this is pretty bad, and I had expected much more from these guys.

Pours a hazy pale golden-yellow colour, with one inch of soapy, sparkling white foam generated atop. It lasts for several minutes or so, steadily wilting down until only a creamy collar and thin cap remain, along with a beautiful coating of lace. Looks great, although the aroma is quite muted - the only features of any significance are fruity hints of pineapple, peach and passion fruit. Perhaps some faint suggestions of crackery pale malt sweetness, too.

Very light-tasting; I don't think there's actually any wheat in this one, but it still reminds me of a basic American pale wheat ale (albeit with some fruit juice added). Crackery pale malts serve more of a structural role, with fruity notes of pineapple, apricot and passion fruit providing the only real substance to this beer. Finishes with floral hops and an annoying metallic note that really bugged me at first, but seemed to subside as the beer approached "barely chilled" temperatures. Light in body, with moderately assertive carbonation that feels crisp on the palate. Refreshing and easy to drink, but that's where the compliments stop - because honestly, that's all this brew has going for it.

Final Grade: 3.32, eking out a B-. Lions Summer Ale isn't too bad, but nothing about it strikes me as all that good, either. I'll be fair and point out that light, fruity ales are not a go-to style for me, so this one was working uphill from the start - but even taking into account my own personal bias, I found this to be a rather underwhelming pint. The juice flavours are fine (neither too weak nor overdone/cloying), but the base beer itself was dull and boring. I'm not even a big fan of the Winter Ale, but I'd take that one over this any month of the year.

A: Translucent standard yellow colour and plenty of frothy white head if poured for such that lingered slightly leaving some lacing.

S: I was very surprised by the lack of fruitiness in the smell. It smells very much like an unflavoured beer. Balanced lightly funky doughy malt and floral hops.

T: The taste mirrors the smell. I might have been expecting something more like tropical fruit punch but it's completely unlike that. Not too bold or flavourful but not exactly water either. There is a bit of a fruity citrusness to it, some peppery hops, and little malt flavour. It's not sweet but not bitter either, it's more.. slightly astringent? Especially in the lingering meh aftertaste.

F: Probably the best part of this beer. Has a nice medium carbonation, a little thickness, nearly no coating but somewhat drying.

O: I'm a little disappointed but it's possible I drank this beer with the wrong expectations. It's a "flavoured beer" but don't expect much flavouring. That said, it's perfectly drinkable and doesn't taste horrible, it's just not as bright and refreshing as advertised, in my opinion.

341ml bottle - nice to have a so-called summer ale while in the midst of a snowy mid-April. At any rate, this is flavoured with pineapple and passionfruit juice.

This beer pours a mildly hazy, medium golden yellow colour, with two fingers of puffy, finely foamy, and sort of fizzy dirty white head, which leaves some volcanic island profile lace around the glass as it readily sinks away.

It smells of musty mixed tropical fruit (hard to really pick out the pineapple, which is a tad surprising), lychee syrup, grainy and doughy pale malt, and some ethereal leafy and floral green hop bitters. The taste is more peach/apricot in its fruitiness than pineapple/passionfruit, gritty and grainy pale malt, a bit of rising white breadiness, and more rather tame earthy, leafy, and musky floral verdant hoppiness.

The carbonation is fairly active in its palate-supporting frothiness, the body a decent middleweight, and mostly smooth, with a wee airy creaminess sneaking in as things warm up just a smidge. It finishes well off-dry, the muddled fruitiness really running the lingering show here.

Overall, this is pretty much the seasonal analogue to the Lions Winter Ale from this quasi-craft brewing concern, in that it hits you over the head with the adjunct essences (for me, it's the vanilla in the latter version). Easy enough to drink, I suppose, and plainly fruity, which I'm sure will play well on patios across the nation once the titular season arrives for its short time in the, uh, sun.


Lions Summer Ale from Granville Island Brewery
Beer rating: 80 out of 100 with 18 ratings