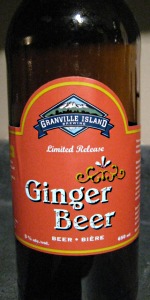 Notes: Spiced with the bold flavour of Hawaiian ginger, this sessionable ale combines water, malt, hops and yeast. Big Kahuna ginger creates a refreshing taste with a spicy kick you can only get from the South Pacific.

650ml bottle, March seasonal kept aside for a couple of months.

Taste: Pretty much like the aroma. Difficult to detect much malt or hop presence here as the ginger is brought to the forefront. Distant sweet citrus, and honeyish sweetness that sometimes overpowers the ginger. Crisp, refreshing finish akin to a pilsner, making it taste almost like it is bottom fermented. Having said that, the finish is very dry.
This is the 2009 release, and is a big difference to the 2008 brew. In 2008 it was brewed with an organic ginger that was far stronger both in aroma, flavour, and especially in burn; but was also inconsistent in that occasional bottles were nowhere near as strong as the others. In 2009 it is much sweeter and not as rewarding, and there is no burn from the ginger at all.

Mouthfeel: Medium to full bodied, with a lot of clinging silkiness.

Drinkability: Good beer, but if only this year it was as strong as last year, it would be more worthwhile. However, many drinkers would have found last year's brew to be too much for them, and this year's brew far more accessible.

If I was rating the 2008 beer, it would have scored maximum marks for its aroma, taste, mouthfeel, and drinkability, as a good bottle last year was a force to be reckoned with. Unfortunately in 2009, it is merely good.

A new seasonal from Vern and the gang, this beer is light on its feet with the ginger taste not too over the top. A well crafted ale with a crisp taste that benefits from the ginger addition. Steamworks makes a version with more ginger but this is a nice patio beer that would match thai and sushi well.

Extract tasting ginger. Only ginger. Not so drinkable. Slight orange coloured body.Thanks for the gift, Stephen. Thinnish mouthfeel. Malt, ginger and one dimensional.Would like to be a whole more tangy than sweet. Would like more complementary spices.

Something new from Granville Island, who usually sticks to the more popular styles of beer.

About the only thing similar I've ever had is St. Peter's Lemon and Ginger ale. This compares favourably, although it is strictly a ginger beer.

The colour matches that of a pale ale or an IPA: nice, clear orange-amber with a good, fluffy white head. Not the pale gold of non-alc ginger ale.

Smells strongly of ginger. Sweet, tangy and packing a bit of a bite. No detectable hop smell, very little malt (this perhaps adds to the sweetness). Smells almost like a ginger ale pop, somewhat like Reed's Ginger Beer.

Sweet, tangy ginger taste. Malt in the background, but again no hop flavour. The ginger cleverly hides the alcohol. When ice cold, this drinks like a soda. There is a bit of a bitter aftertaste as it warms.

Overall, a very well done and interesting beer. A bit on the sweet side to drink too much of it. Another great seasonal from GI.

Smell: Definitely a spicy ginger character in there but also a nutty, lager base.

Taste: Well the ginger is more there for the aroma it seems as I don't taste it very much. No tingly nostrils like previous versions caused. This beer actually tastes a lot like the Oktoberfest. I love that beer but in context, probably not the flavour they should be going for. Caramel-y, slight sweetness in there and a good, solid German tasting lager.

Drinkability: Well one could drink a few of these, but I really don't think GI achieved the intended flavour profile. I'd drink it for it's similarity to the Oktoberfest, but if I was looking for intense ginger flavour, I'd only have one.

Overall: I like this beer the wrong reasons, hence the decent rating. GI didn't hit the mark, however, for the style. Nice aroma, dull taste(for the style). Oh well, I can't really complain cause I'm enjoying it.

22 oz bottle into a couple of pint glasses. Thanks to Barscream for sharing.

Pours a clear gold (with some oily looking suspended solids)with a thin fizzzy brite-white head. There isn't much of a retention and very little lacing is left behind. The aroma, as you would expect, has a very strong scent of ginger to it, with some other residual accents of sweetness behind it.

The taste is also pronouned notes of ginger (but not as much as the aroma) and some sweet maltiness. There is also an underlying hop profile that kind of glides along on the malt notes. The mouthfeel is actually a bit fuller than I would have expected bases on the taste with a poppy carbonation that meshes welll with the spicy accents of the ginger.

Quite an interesting beer from a new to me brewery. The ginger was quite pronounced at times but always seemed to pull back when it was about to become overbearing. I had no problem finishing off my share of the bottle but I'm not not quite sure that I would have been up for the whole thing.

This beer pours a slightly hazy medium golden copper hue, with one finger of fast-disappearing soapy white head, which leaves no lace around the glass. It smells of fresh ginger, and sweet bready malt. The taste is warm, spicy ginger root, some soft, sweet honey, and a solid caramel/bready malt. The carbonation is tight, almost soda-like, but that could be the ginger messing with me. The body is on the lighter side of medium weight, smooth, and soft. It finishes clean, crisp, and fresh, a bit of earthy spice lingering.

I wanted to mention gingerbread in the flavour description, since there's ginger and there's bread, but just not the right kinds. The natural ginger affords this otherwise decent crisp, malty beer a nice spiced edge.

Appears pale amber with a short (and short-lived) head and evident carbonation.

The aroma is of fresh ginger but with none of the pungency of real ginger beer. A bit malty as well. Not a lot to inspire here.

The taste is refreshing but also kind of bland compared to my Jamaican-style ginger-beer expectations... gingery, a bit of honey, grassiness and crisp malt, enjoyable and different than the norm but really not packing much of a flavour punch.

The mouthfeel is thin and almost soda-like. This does make for a very refreshing and well-drinkable bottle, though!

Poured from a 650ml bottle. Pours a tempting orangey-gold colour. The nose is surprisingly floral and pleasant. You definitely get the ginger notes, but it's not too "earthy" like other versions. The taste follows suit. It's a bit sweet, which balances the ginger nicely. In spite of the slight sweetness, it's very drinkable and refreshing.

A - mostly clear and very bubbly golden, two fingers of head fizzled but retained due to the endless stream of carbonation rising from the bottom
S - adjunct and light grain, mild leafiness, ginger is very subtle, maybe too subtle for my liking
T - much like the nose, the ginger is still subtle but does build a little towards the finish and as you take more sips
M - medium to light, tough of sweet & spicy ginger, mild wheaty quality
O - I prefer my ginger beers to be more pronounced on the key ingredient, although its a bad approach its just a little lacking in my estimation

A: pale yellow, straw
S:some ginger but not much. I'd like even more but I REALLY like my ginger.
T: initial taste of ginger but then fades; for the second sip the ginger is barely noticeable except a hint in the finish; no hop aroma or bitterness at all. Dry finish. Nicely balanced. Light and and refreshing ... but not a lot of taste.
M:light, fresh, mild
O: This is the kind of beer that could be a real crowd-pleaser at a BBQ or by the lake: not complex, not offensive to the mass-produced lager drinkers, appealing to non-beer drinkers, and interesting enough for beer lovers. I'd buy it again but if you like the taste of ginger "beers" and can do without the alcohol (???!!!), Reed's Ginger Brew has much more taste.

Overall - A lackluster ginger beer by GIB. The aroma suggested a spicy ginger character, but couldn't pick it up in the flavour profile. Was hoping for more of a kick from the ginger. Still refreshing, but a little disappointing.

Granville Is. "Ginger" Beer @ 5.0% , a 650 ml bottle , 2012 limited edition
A-pours a clear gold with small white head that leaves no lacing along the pint glass
S-Hawaiian Big Kahuna ginger dominates , some floral also
T-ginger dominates the taste , but is not overpowering , crisp finish
MF-light to medium carbonation , tad sweet on my palate
Ov-goes great with sushi , which is a once in a while meal for me , give one a go this summer before they're gone