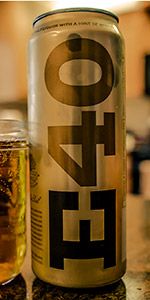 Notes:
View: Beers
Reviews: 9 | Ratings: 21 | Log in to view all ratings and sort
Reviews by tomb_ride:

Just picked this up at my local liquor store. Been waiting for it to come to my city.
Got the 40oz. Bottle. Only drinking it from the bottle the taste is what you would expect from a malt liquor beverage. But the honey real gives it a nice finish. Smells of malt and slight honey and citrus. Goes down smooth for being 10% abv. Little pricey for a 40oz ($5) but, for the amount of alcohol and how good it is for a malt liquor you really can't complain. E40 came and conquered with this one.

Clear gold with a small but momentary white head, well it looks like beer!

Quick aldehyde test is positive, you do this by holding the glass up your eye and see if it starts to water or sting. Old distillers trick.

Smells sweet and highly fruity scent of green apple. Toasted grain scent and ethanol. Slight melon scent. This was brewed hot and fast and is well on its way to being ethanol for cars.

Starts out sweet and fruity in the mouth, but it doesn't sting or taste actually bad. Taste of apple cider, this thing was brewed way to hot and fast. That is about it, beer that tastes vaguely like apple cider.

Overall it is more drinkable than many high test Malt Liquors. But saying that this isn't great. Not going to finish it all the aldehydes and esters in this would give you a NASTY hangover.

Had from 40oz bottle, so no judgment on look. Smell surprisingly fresh and pleasant. Nose and taste vaguely reminiscent of grüner veltliner, which was unexpected. Nothing otherwise too off on the palate, and mouthfeel in keeping with style. Was $5.98 with tax at the corner store, which I thought was fair but not a bargain, on balance (considering ABV, volume, and quality).

A: Dark burnt golden color with a dense and fluffy off white head.
S: Borderline offensive nose with strong metallic notes overshadowing hints of solventy fusel alcohol, adjunct grains, and fruity yeast esters. There's a peppery spicy quality to the nose as well.
T: Fruity esters abound mixed with rough notes of diesel fuel. Peppery spice in the finish with cereal grains, banana esters, and a lingering solvent alcohol.
M: Full body, heavy and chewy mouthfeel that is sweet and almost syrupy, fuzzy and soft carbonation.
O: Rough flavor with a rough fusel burn. Definitely a high gravity malt liquor that doesn't try and hide anything. I can almost feel the hangover as I drink this. Sickly fruit esters like a lager fermented too warm.

Pours a gold malt liquor color with a reddish hue, with some soft bubbles. Aroma is adjunct grains and sugars with a fruity hint to it- not nearly as offensive as most of its malt liquor brethren. Taste is straight shitty white wine grapes and adjunct malt beer. If I was blindfolded, I'd swear this was a cheap wine mixed with beer. Feel is pretty flat. Decent for a malt liquor. Bonus points for the E40 clout.

Recently was dared to review a King Cobra. Actually did not know that Malt Liquor was reviewable on Beer Advocate. Once I looked it up and saw I was, had to go with it. Once I saw that there were seven (seven!) other Malt Liquors at the next-door market, made it a point to review one each Tuesday until I run out. Typically am against all the big boy beers, but I am breaking that rule for this challenge. Sixth up was E40, which I remember coming out a few years ago as a big thing. Can reads that it is a “Premium Malt Liquor with a Hint of Honey.” A quick glance on Beer Advocate and it looked like it had a 3.27, pretty respectable for an American Malt Liquor. Heading in I had it Mickey’s, Hurricane, Natty Daddy, Old English 800 and King Cobra with the latter three pretty far back.

Initial smell was kind of a mess, but each whiff after was much better. Got red apple, wet grain, Also pear, corn cereal, honey, sugary caramel and slight peppery spice. Had me looking forward to trying it. (Smell - 4.00)

First taste had me scrunch my mouth, more in surprise than anything else. Not too bad. Got apple cider, cinnamon, honey, pear juice, hints of allspice, Honey Nut Cheerios, sweet barley, a touch of caramel and peppery spice. Just lovely for the style. 10 pct. ABV is very well hidden. (Taste - 4.25)

A: Burnt gold, perfect color for a malt liquor, but the white head quickly fades.
S: Strong traditional lager ester profile in the nose, some solventy character and spicy hop character. All are expected in a good malt liquor. The honey comes through subtely in the nose.
T: Sweet barley flavor well balanced by spicy german hop and fusel alcohol harshness. Honey comes through without being obvious or overpowering. German lager type esters are also strong. Overal flavored to style as a malt liquor. No one flavor emerges from this beer to take it from drinkable to delicious.
M: Very thick, as expected from a high ABV beer.
O: Very drinkable at 10% abv, one 40 oz is not as difficult to finish as it probably should be. It is a huge improvement over the vast majority of malt liquors, but doesn't stand out amongst the top teir. While it isn't nearly as good as St. Ides, which has a truly unique mouthfeel and flavor profile, it is still certainly worth getting and easier to find.

Great beer for all the malt liquor fans out there not a beer for the craft heads they are probably gonna think its gross. this beer reminds me of 211 but with honey so this beer is actually smooth and at 10.00% you only need one 40oz!

Amber Color, Wine-esque smell, initial first time hard alcohol taste with later near pleasant initial taste. the strength of 10% is not as prevalent as expected and has a pleasant overall feel. Be careful enjoying as a novice, but for more advance drinkers, it hits the spot. I would recommend.