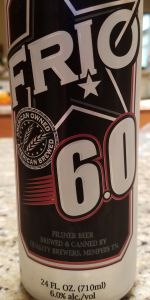 Poured from a can into a pint glass
Appearance – The beer pours a crystal clear wheat color with a one finger head of fizzy white foam. The head fades very fast leaving a tiny bit of lace on the sides of the glass.
Smell – The aroma of the brew is rather off overall with some aromas of cardboard and must as well as a touch a metallic corn syrup smell.
Taste – Surprisingly and in opposition to the nose, the taste wasn’t that bad (it wasn’t all that great though either). The tastes started with a rather clean corn syrup malt like taste that has a bit of caramel and a touch of doughy malt. As the tastes advances the malt and sweet get more pronounced and leave one with a rather sweet, and quite adjunct flavor to linger on the tongue.
Mouthfeel – The body of the brew is light and crisp with a carbonation level that is average. For the style the feel is fitting and makes for an easy drinker.
Overall – Other than the offensive aroma, the brew is actually decent for the malt style and the cheap price. It gives you a decent bang for the buck at 1.29 per tall boy, and while not the greatest tasting, it is not super offensive either.

Look is clear medium gold (rant, I read a review who called it dark amber, are you fukin stooped?) smell is typical adjunct lager, corn, sweetness etc...,. Taste is surprisingly balanced. Nondescript hops and malt/adjunct, a little sweetness, overall not unpleasant. Are there better beers? For sure. This is not a bad tasting beer, for what it’s marketed as it’s very good. Way better than a lot of the econo-beers out there. I’m not sure if it sold other than HEB supermarkets. Cheers

10/26/19
OMG. I just read a review below that some dumbass thinks the 6.0 means this is the 6th version of this beer and not the abv. Too funny, I almost feel sorry for him. Lol. I think some of the beer snobs try to put too much thought into some of their reviews. It’s just a cheap beer dummy, don’t make it complicated.

So this is a beer that if you have like $20 and want a 30 is a good choice. Around 7 of these will give you a good buzz and they actually taste decent unlike steel reserve. They also have a light option if that is your preference which is the same cost. Also 6 pack of 16oz for both is $4.75 here in Texas. Well worth the money or at-least a try

I am going to skip the formal judging on this one. It looks decent, smells not too terrible, has a cheap beer flavor that translates well to the 6.0% format. Hides the alcohol well and gets the job done.

I think if I was hosting a party and I had to buy a 30 pack of beer, this would be my first pick. Out of all the cheap beers I've had so far, this one is one of the best I've had. Very drinkable, doesn't have a dirty, crappy taste like Bud Ice or Steel Reserve. This is a very clean Malt Liquor. Better than half of the big beers out there. @$1.35 for a 24 oz. can, I have absolutely no complaints.

Living on the border to Mexico in the Rio Grande Valley looking for a good beer there are alot but when I found Frio 6.0 it was amazing. I love the taste not as strong as other with the same amount of alcohol and like that it dont taste like water like others. The buzz is awsome after the first 24oz especially after a long day of work.I personally prefer the 24oz I buy them by the case on the weekends. But lately my store hasn't carried them for a while they blame the distributor. I was counting on having a case for my 4 day weekend but couldn't find any at any HEB. If I could I'd give it a 6.0

I'm not going for the picky connoisseur approach. I'm going for the: "What works best for the price, quantity, and buzz". It doesn't taste like mule urine and gives you an easily-achieved buzz for less than $1.40 per beer. Especially for the 24.oz.

This beer is not a frothy and full head type beer. It has lighter taste even though it's 6%.

It's the kind you buy in bulk for cheap, ice down to 29°, then crack, poke a hole in the top, and down. Repeat if needed.

No complaints here. I highly recommend.

Pours out a clear dark amber. The head is white with moderate retention. Leaves a bit of lacing. Carbonation seems low for the style.
Smells of corn sweetness and pennies. Also getting a sort of banana peel scent.
The pennies seem to be gone and mostly just a corn sweetness with some Xanax.
Mouthfeel is a bit heavy but the carbonation seems to be more than it appears.
Not the worst cheap malt liquor Iv'e had.

Aroma gives off corn adjunct, 6-row barley, cheap malt extract, and syrupy malty sweetness. Luckily, it's not metallic or anything, but some graininess to cut that corn adjunct would be nice. Aromatic intensity is mild.

The creamy texture of the brew pairs well with its pale malt (I think 2 row?) backbone. Not as sweet as the aroma suggested, nor do I taste much adjunct. ABV is well disguised. Well-carbonated, actually, giving it a welcome crisp edge without rendering it sharp. Not unrefreshing.

Smooth and wet. Not oily, harsh, astringent, gushed, boozy, or scratchy. It's admittedly quite neutral and shallow, but there are no off-flavours and it's rather inoffensive for its price.

Frio 6.0 is a great budget get-you-drunk beer but not a good choice for discerning drinkers. It's not a pilsner in any respect, but rather a vaguely defined pale lager. In terms of neutral tasting fizzy yellow beers, you could do a hell of a lot worse; this isn't watery, syrupy, or metallic, and it actually has some body and some malt flavour. I'll enjoy skulling the odd can of this during casual drinking sessions, but as impressive as it is for the price it isn't a beer I'd go out of my way to recommend to beer enthusiasts. Highly drinkable fare in any case.

Innocuous cheap fare with a hint of a syrupy drift but it's inoffensive and off-flavour free. So many beers of comparable budget pricing are syrupy boozy viscous nightmares or watery thin piss, but this sits right in the (un)happy medium and will do the trick for you if your goal is end of night shitfacery without shelling out a Jefferson per can for fancypants beer.

A student beer of the highest calibre, which is to say it packs a bang both in terms of buck and in booze.

Have her for a swig, lads. Just the once, if only.

Protip: Try adding salt and/or lime to this for extra pizzazz.

Frio 6.0 has a medium white head, a clear, bubbly golden appearance, and a bit of lacing left behind, on the glass. The aroma is of a odd grape drink thing, with some strange, off smells. Taste is likewise off and odd- again, the cheap, store-brand grape drink mix. No sort of hop bitterness, here. Mouthfeel is light and watery, and Frio 6.0 finishes somewhat crisp and finishable. I didn't dump any out.

Less that $17 for 30 beers, just saying!!! Nice light pilsner that drinks easy is 6% for a little kick. Some times its nice to drink the cheapest beer and laugh at 50 cents a can.

To be honest, this should not be reviewed with the mentality that it is a well-made Belgian. I bought it because it gets really hot in Texas and I like a thin, watery beer after mowing. I have bought the light version of Frio and think it is a decent choice. Secondly, this is really cheap. That being said, it has a strange metallic taste (did they line the can?) and a funky smell. I will certainly drink the rest.. really cold, with lemon, when I'm hot. It won't be coming home again. There are better watery, bland American beers to be had.

Wonder if there is any flat out HFCS in this wonderbrew, foam’s spritzy like a club soda and champagne cocktail, and vanishes like the warranty once ya drive it off the lot. If foreskin tasted like this, the circumcision was probably invented to try and find something better tasting inside. Pale like it’s embarrassed and the only tinge of color is from a slight flushing of shame. More like Frio 1.0. Did they really re-try this six times to reach this level of tolerability? As if its kick comes from an alcohol saturated fart infused into an O’douls. This tastes exactly what “I wish I could get my money back” tastes like. Sound of foam almost screams, like bubbles of carbon dioxide committing suicide. (I can only hope CO2 at least, is the gas escaping, can’t blame any element herein for wanting direly to escape this shabby assemblage). Aftertaste is soapy, as of a soap that if given as punishment for swearing, I’d have the vocabulary of a Mormon preschool teacher under constant video surveillance to the rest of the congregation.

24 oz can bought at the Leakey General Mercantile while floating the Frio river...deemed it appropriate. Pours a clear straw color with a surprisingly decent white head that shows some lacing and retention.

Nose is a poor grainy aroma with a little bit of 409 mixed in. Not pleasant.

Sourish malt flavor that actually isnt too offensive. Doesnt taste too much different than Frio light, a little more heft and viscosity. For me, the best aspect of the Frio line is that it is an American Adjunct Lager with probably the least amount of actual beer flavor. I can probably choke this down, but as with Frio light, I will add some lime juice to make it palatable.

I can't review something this bad. This is sour water in a can. Surely I got a bad batch....this stuff is bad. I doubt it was 6% alc. It was just water. The only taste comes from the can it is in. I hate to know what the light version taste like....air perhaps?

Aroma: Cooked corn, wet grain, and solvent alcohols dominate the aroma. Even when quite cold, the aroma is a bit harsh.

Taste:Opens with flavors of wet grains and cooked vegetables, soon followed by warming solvent alcohols. As the taste progresses, the alcohol and metallic and hops dominate the taste. There is also a little bitter grapefruit late in the taste. Finishes with a mild, lingering metallic flavor.

Mouth feel: Smooth, a touch thin, with a bit of zesty carbonation.

Drinkability/notes: A mediocre example of the style, but cheap at $3.99 plus tax for a six-pack of sixteen-ounce cans.

Presentation: Packaged in a sixteen ounce aluminum can, served in a New Belgium Brewing chalice.