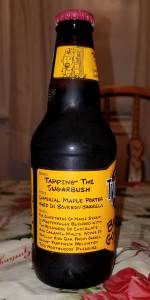 Notes: Tapping The Sugarbush is an Imperial Maple Porter aged in Bourbon Barrels. The sweetness of maple syrup is masterfully blended (if I do say so myself) with the richness of chocolate and caramel malts. Notes of vanilla and oak from barrel-aging further heighten this north wood's pleasure.
View: Beers | Place Reviews
Reviews: 7 | Ratings: 40 | Log in to view all ratings and sort

This beer looks like a Porter should. Smell, one picks up a bit of sweetness in the aroma. Taste is not bursting with flavor but pretty ice. The feel is where I think this slips a bit. It has a nice rounded full mouthfeel but I thought was a bit heavy on carbonation. Overall a nice beer.

Pours dark brown with translucent edges, medium to small head, some fine carbonation. Smell is...not quite absent.If I smell right from the bottle (nice narrow opening with a bunch of surface area recently coated by the beer), I certainly get maple and booze. Doesn't smell bad, but not exciting.

Taste is much more intense -- stronger maple, sweetness, weaker booze, chocolate and vanilla, maybe some char (not the fish -- a burnt wood flavor). Booze is definitely still there, and maybe the flavor is building as I taste it.

Mouthfeel is thick and sticky. Overall...it's not bad.

$ 7.73 (Including shipping)/12 oz bottle ($ 0.595) from Tavour, Seattle, WA. Reviewed 1/17/19.
“BOTTLING 26OCT18” in green ink in the bottle neck, stored at 42 degrees and served at 54 degrees in a hand washed and dried Jester King snifter.
Appearance – 3.5
Body – Dark brown/black, opaque. Slight effervescence.
Head – Small (Maximum one cm, aggressive center pour), tan, average density, short retention, diminishing to a two to four mm ring and a thin partial layer.
Lacing – Poor. Pieces of lacing like solar prominences, all tiny bubbles. But then, considering that it’s a 9% BBA brew, that’s not too surprising.
First pour – Brown, clear.
Aroma - 4 - Very strong maple syrup – weakens over course of consumption.
Flavor – 4 - Initially sweet with some maple syrup, but as it warms, a malty bitter edge appears. No alcohol (9% ABV), no diacetyl, no dimethylsulfide.
Palate – 3.5 – Medium, almost syrupy, soft carbonation.
Impression and interpretation – 3.5 - No bourbon taste or aroma; however, bourbon appears on a couple of follow-up belches. No barrel notes. The maple syrup carries the flavor but there seems to be some variation in degree of flavor between bottles. The appearance of terminal bitterness also appears to be a function of bottle selection. Overall, a decent beer but not what it should be considering the labor and expense that went into it.

Poured 12oz bottle into snifter. It's very dark brown with a tan 2 finger head that leaves behind spotty lacing. Nice aromas of sweet maple syrup, chocolate cola, bourbon and vanilla. The richness of the chocolate cola porter blends well with sweet maple syrup. Caramel is woven with vanilla and bourbon to round it off. Feel is smooth and medium bodies with soft carbonation. Not too sweet and absolutely delicious.

Thanks to ncusatis for this 12 oz. stubby. Let’s tap this mutha. Tap that, tap this, I’m triggered, I got a text today with a typo & thought it was some fresh new slang. I’m old. Speak olde English, please.

Pour is black…it’s a porter, right? Looks purty in my Kuhnhenn glass that some fine feller sent me some while back. Nose is typically BGW light: some maple, sweet malts, bit of bourbon. Quiet.

Tapping the Sugarbush lights me up like reading the Battle of Helm’s Deep. Everything is present & beautifully proportioned: chest cavity warming bourbon, deep wood maple sweetness, gentle alcohol burn, moderate roast & bitternes. Serious oak bite at the end after it’s warmed. Thicker & richer than most of the BGW brews, & smooth enough to slide right down continuously.

I’d like to have this beside my weekly Sunday morning Belgian waffles. Then on them. Then take a long nap. Damn that sounds good. Excellent beer - which just means it met my expectations.

Pours to a dark brown to almost black appearance with a frothy tan head of two fingers. Somewhat reticent nose of creamed vanilla, bourbon and oak. Taste is complex, rich and sweet with vanilla, caramel, bourbon and chocolate. Mouthfeel is creamy with low to no carbonation. Nicely done BGW beer. This was very limited - would love to see this more available if it makes a return appearance.

Appearance: black bodied beer with large khaki head. Head pours a full 3 fingers tall after a hard pour. Good head retention with thick lacing on the glass. A thin cap remains for a long time and eventually recedes to a ring around the glass.

Smell: Oak barrel, an earthy maple note, and bourbon; they are all similar strength without one overpowering the other aroma. Hints of vanilla, cola, rootbeer, and bakers cocoa.

Taste: Moderate sweetness with light roastiness. Maple is sweet yet earthy which is the first thing that you taste. Not like Aunt Jemima pancake syrup, but like the maple sap straight out of a maple tree. Vanilla, caramel, milk chocolate, cola, and oatmeal are present in the middle of the taste. This beer finishes with a dry earthy oak, milk chocolate, and a light bourbon kick.

Overall: Another fantastic BGW beer. I believe this beer is the bourbon barrel maple porter that was a draft only offering last year; now released in a bottle with a yellow label and an awesome name! I have always enjoyed the BGW series by Tyranena for the high quality barrel aged adjunct porters and stouts at such a reasonable price point. Tapping the Sugarbush is right there with the best of them from this series. It offers a great nose, complex and layered flavors, with nice mouthfeel.


Tapping The Sugarbush from Tyranena Brewing Company
Beer rating: 91 out of 100 with 40 ratings