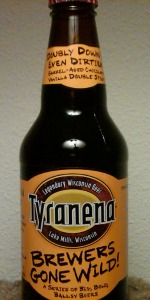 Back in the day, these dudes were one of the few that was putting barrel aged beers in 12oz bottles (2008 BCS was but then they got away from that).

Pours dark brown to black. Brown head, went up, down, settled around 1/4" before trickling away. Nice light bourbon note met equally with chocolate and vanilla. Simple, yet pleasureful.

Taste is a lot of chocolate malt pasted so smoothly. The bourbon is light, this isn't an aged for 3 years, more like 3 months kind of feel, and it works in great parity with the oats providing even smoother mouth feel. The vanilla as well. Very well done, but because they're inexpensive and shelf products, they don't get as much love maybe. One of my favorites from the brewer's gone wild series, definitely better than their hoppy products (same w Central Waters).

Rated by Jasonrm72 from Colorado

Reviewed by yesterdayfaraway from Missouri

4.09/5  rDev -1.7%
look: 4 | smell: 3.75 | taste: 4.25 | feel: 4 | overall: 4.25
12oz bottle courtesy of the tremendous generosity of @Ri0. My second and – sadly – last Tyranena beer, a “Barrel-Aged Chocolate Vanilla Double Stout.” My word. According to the info on the label, this was “brewed with cocoa nibs and aged in Bourbon barrels with cocoa nibs and vanilla beans.” That sounds like a lot of cocoa nibs. No abv listed, and no freshness date, but I can’t imagine a beer like this will be too susceptible to age.

Poured into a stemless wine glass, this was the color of night, if night came with an inch or so of foam colored somewhere between tan and mocha. Said head dropped fairly quickly but didn’t die out, and left spotty lace on the sides of the glass. When held up to light, there was the faintest bit of lighter, brown coloration near the top, but otherwise no change in appearance.

Initially, vanilla is the first thing to jump out, aroma wise. One might have expected more cocoa notes than are present due to the repeated mention of the nibs on the label, but the vanilla seems to rule the nasal roost. There are some oaky notes, and a little bit of cocoa-y sweetness, but it remains the vanilla’s show more than anything else.

When it comes to flavor, the vanilla is dialed back quite a bit in comparison to their presence in the aroma. However, the cocoa is still not a big component. More than anything else, I taste Bourbon in this beer’s flavor, aided and abetted by the vanilla beans. About midway through the flavors imparted by the Bourbon barrels more or less shoves aside the vanilla beans and takes over, though they make a reappearance at the swallow. Throughout there is a cocoa-like sweetness, but it’s way in the background. While this didn't taste how I expected it to, this tastes really good, and is surprisingly well balanced.

The body is at the lighter end of full, with a coating, slightly creamy mouthfeel.

Very good, but not at all what I was expecting. I thought it would be higher in alcohol, but perhaps that was just as well, with Bourbon flavor but not much alcohol “heat.” As per usual, a little vanilla went a long way with me, but this wasn’t truly a vanilla bomb like some. The cocoa nibs are what surprised me most, via their apparent subtlety. I went into this beer expecting it to be a choco-bourbon bomb. I don’t mind that it’s not how things worked out, just surprised. Again, I’m impressed by how much Bourbon flavor Tyranena manages to pack into a beer that, all things, considered, isn’t terribly boozy for the style.

A: Deep brown almost black with smallish one finger head that settled quickly to a thin ring around the edge. Some light lacing.

Rated by Elumbeer from Wisconsin

Reviewed by kbwalters from Wisconsin