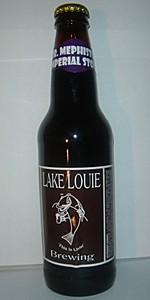 Going on 2 years old. Standard pitch black imperial stout with a good carbonation. Aromas are fruit forward with raisins and plums along with some chocolate malt sweetness. Tastes are quite similar with a bit of wine like notes. Nice medium mouthfeel as well. Overall a nice stout that is still drinkable for the percentage.

Weak roasted malts, thin body, and high carbonation. Makes me wonder why they called it a RIS.

I rated it high because I loved it. But be warned, it seemed really sweet for a Russian Imperial Stout.

Appearance: Dark Chestnut to black. Some light comes through- more in line with a heavier single stout than an Imperial. Tan foam fades from 1 finger to none after about a minute.

Aroma: Sweet malts mixed with wet leaves. Some coffee overtones. Similar aroma to Old Rasputin but muted across the board.

Taste: A very sweet-forward Imperial Stout. Not much happening roast-wise. Borders on being a milk stout- a touch rougher and I don't think there is any actual lactose in this brew. A bitter finish, even after over a year in the bottle. Many Imp Stouts are night-cap beers- this is a mid-afternoon version. Aftertaste is actually really pleasant- coffee. chocolate, and dark roasted barley.

Feel: Slick and more firm than I would have anticipated. Certainly doesn't get cloying or as sticky as some of the bigger examples. Some would count that as a knock on this beer- I think it toes the line of drinkable Imperial Stout.

Overall: I'll probably have a few more of these (and hopefully find it on tap) before I draw a final conclusion. Is it really an Imperial Stout? Not this day and age, when many single stouts are topping it in abv and body. But when it hit the scene 10 years ago this was probably one of the heavier beers brewed in Wisconsin. It would be a good fit at the heavier end of a single stout flight, or it could be a great half-time beer during a heavy imperial stout tasting.

For this beer, the sum of the parts is what matters, and Lake Louie delivers a well made, balanced, restrained small Imperial Stout.

Wow, this is lovely. Great mouthfeel, robust flavor and smell.

Overall - Rich and satisfying. I like the flavor a lot, but it may lack some of the complexity of other beers in this category.

Hmm... I'm not quite what to make of this. The flavor in the mouth says "I'm a pretty big double stout." And there is complexity. It's just hard to pick out the particulars. There's a medium- to full-bodied feel, with a surprisingly lively carbonation. The flavor is somewhat disappointing. The liquor-soaked, dried dark fruits are clearly there, just ill-defined, more like a memory of dark fruit. Same with the roasted grains. The whole shabang seems encased in cold black tea.

This is a good beer. I'm just not sure I'll buy it again, with so many truly awesome Russian Imperial Stouts around. My favorites are Founders Imperial, Mikkeller Black Hole, and Hoppin' Frog Boris/Doris. I might feel more positively if this brew were $7 or $8 a four-pack, rather than $10.