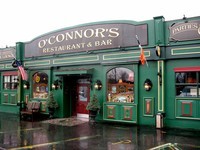 Reviewed by krantul from Massachusetts

4.3/5  rDev +12%
vibe: 4.5 | quality: 4.5 | service: 4.5 | selection: 3.5 | food: 5
This is an authentic Irish pub/restaurant. The owners are Irish, as are some of the staff, and the place feels genuine. They didn't just slap a shamrock on the wall and call it Paddy's. The walls of this place are a veritable museum of Irish breweriana and other miscellenia from the Emerald Isle.

The beer selection is pretty good for a place that is certainly a restaurant first and a watering hole second. They have pretty much every Irish beer on tap that you can get in a keg out here: Guinness, Harp, O'Hara's (Stout and Red), Murphy's (Stout and Red), and Beamish, as well as some related staples like Bass, Belhaven, Wexford Cream, and Boddington's. It's a pretty "complete" selection, though obviously variety is somewhat lacking. Additionally, they generally have a few different locals, like Harpoon and Wachusett. Two taps seem to be in relatively regular rotation: on my last visit one had Berkshire's Lost Sailor IPA, and the other had Nashoba Belgian Pale. Crap macro beer is served, but largely in a limited selection of bottles.

The service is generally swift and efficient: Brendan O'Connor is known to be something of a taskmaster in these parts, but that's why his fabulously busy establishment is clean and runs like clockwork. The only disadvantage is that the pace seems to burn people out pretty fast, and staff turnover seems unusually high. Nonethless, the man Himself can often be found manning the host station, and he's pleasant as punch to the customers.

Food? This is almost certainly the best restaurant in Worcester, and is regularly voted as such in the local publications. From pub grub, to Guinness Pie, to a dizzying seafood selection, this place does it all, does it well, and does it consistently.

I liked this place enough to hold my wedding reception here, and they did not disappoint. To the newcomer, I can only advise that you call ahead on friday or Saturday nights, as there is regularly an hour plus wait on tables. You also may have to hike a bit, as the massive parking lot is usually chock full and spilling down the street at peak hours.

Reviewed by morebeergood from Massachusetts

3.68/5  rDev -4.2%
vibe: 4 | quality: 3.5 | service: 4 | selection: 3.5 | food: 3.5
Stopped by here on a rainy Monday afternoon with my friend for lunch. Once you enter, you are bombarded with Irish pub decorations. Then, you get to the bar, and see the hundreds of tap handles that rim the ceiling and every beam. If you are into brewerania, you'll like this place. Sorta reminds me of an Irish pub version of Sunset Grille in Allston. Grabbed a table for two in the bar area. Our waitress was fast taking our order and checked in on us a few times. Selection was decent for an Irish bar, with about 20-25 beers on tap. They have all the typical Irish/UK beers, plus it seems that they focus on local microbreweries on tap as well. They have two BBC, two Wachusett, Newport Storm, and Opa Opa on draft. I went with the Strangford Lough Legbiter Ale and the Opa Opa Belgian White, both served in 20oz glasses for $5.75. My chicken sandwich was fairly good. Two beers and a sandwich with tip came to $25 each. My friend said that this place get packed on the weekends, so I was glad we were able to check it out during a relatively calm weekday afternoon.
Mar 30, 2010

Reviewed by MonkeeFish from Massachusetts

4.05/5  rDev +5.5%
vibe: 4.5 | quality: 4 | service: 3.5 | selection: 4.5 | food: 4
Having been going to school in Worcester for four years now O'Connors has become a favorite. I have celebrated every birthday here since my 21st and have never been disappointed. Odds are that I have tried over 50% of the food on the menu and it has all been delicious. The beer selection is always good and the atmosphere is great. For new beer drinkers, O'Connors like many other restaraunts have a sampler that you can order so you can try smaller amounts of a variety of beers. The potato nachos are a must.

The bar atmosphere is phenomenal. It would be a dream to have a display of tap handles like O'Connors has on the wall of the bar. Most of the time spent while inside of the restaraunt is trying to figure out what kind of beer each tap handle has come from and whether or not I have drank that beer.

If you have the chance to dine at O'Connors you will not be disappointed.

Reviewed by theresat from Massachusetts

I had Guiness to drink, while my boyfriend had Belhaven Scottish Ale. He had never tried the Belhaven, but enjoyed it enough to note the name to look out for it in the future.

We had bacon and cheese skins as an appetizer, and they were absolutely delicious. We both tried their fish and chips as our entrees, but were dissapointed that they weren't as amazing as the skins had been. The fish wasn't very flavorful, and I wouldn't order it again.

Our waitress was a joy, she provided excellent service and a comedic twist to our experience. I enjoyed the atmosphere, which is filled with entertaining signs and Irish references.

I would absolutely visit O'Connor's again, the only negative of the experience was the fish.

Important note, they aren't usually open on Sundays. We found this out on a failed venture a couple Sundays ago.

Reviewed by cookin420 from Maine

3.55/5  rDev -7.6%
vibe: 4 | quality: 3.5 | service: 3 | selection: 4 | food: 3.5
If your ever in wormtown this is your place to EAT and drink. There are much better spots to do the latter but to park your ass and have a bite while you watch the game? Go here.
The bar is long and the barmaids are hot. Have the sheperds pie if you know whats good for you. Obviously the fish and chips is a winner too.
This is also the place for casual events. I know of many people who have used o'connors many private room for weddings, bachelor parties and even funerals and baby showers. Support a local family owned joint in worcester!

Reviewed by FirstMan from Massachusetts

Worcester is about as Irish Catholic as it gets and this is one of the centers of that universe. Run by an Irish native who moved to the area, it is truly authentic. There are a lot of crappy "Irish" restaurants and pubs in the world, but this isn't one of those.

Warm and homey inside with traditional Irish atmosphere. Very nice bar area as well. Generally it's a nice family kind of place.

The beer selection is almost entirely from the UK. Great selection in that respect. There are a few locals on tap (Wachusett, usually).

If you are into beer mixed drinks (Black and Tan, Black Biddy, etc.) then this is the place for you. Lots on the menu. Not really my thing, but it's cool that they have them.

Food is just wonderful. Absolutely nothing bad on the menu. Nothing. Every single thing I've ever had there has been above average.

Price is a little high, but it's all worth it.

Reviewed by gentlebubbles from Massachusetts

4.1/5  rDev +6.8%
vibe: 4 | quality: 4 | service: 4 | selection: 4 | food: 5
Visited early on Saturday evening, already the place was packed with people glad to linger just in the line to get in. It's pretty obvious why they offer a call-ahead service to reserve a place in the line for table on Fridays and Saturdays.

The bar half is lined with a mind-boggling array of tap handles, bespeaking a active rotation of beers. Too bad everything I wanted to try first was on the wall, not on tap that night.

The restaurant walls are covered with posters, roadsigns, and witty quotes--the usual irish bric-a-brac. The menu is the upscale Irish pub style: salmon, lamb stew and suchlike. From the warm rye rolls to the devasting bread pudding, the food is excellent.