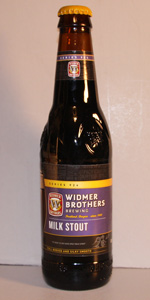 I'm reviewing this in late June, when I normally might not drink a beer of this style, but it's wet and cold right now in good ol' Butte, America, and supposed to get below freezing tonight (elevation roughly 5,700').

Poured from a bomber into a Shaker. A moderate pour produces about 1/2 inch of pale brown foam, which clings to the glass pretty well. The beer is a very dark brown, almost black, and appears almost completely opaque, even when viewed against a lit background.

I detect an aroma only when first sniffing- my nose becomes accustomed to the scent and I must afterwards rely on mouth-nose-burp aroma. Nevertheless, an initial whiff led me to detect something dark, fruity and a touch medicinal. I'm picking up some earthy hops in the full taste, with a nice lingering roasted malt bitterness and slightly tangy hops. I also get accents of black licorice(or maybe anise?), along with dark fruit, along with flavors reminiscent of chocolate and coffee. A bit of sweet and sourness from the lactose is detectable but not overbearing by any means. A gradual alcoholic warming becomes apparent about 1/3 down the pint. The mouth feel is fairly full, but actually maybe on the light side for a stout.

I haven't sampled a tremendous number of stouts, but it's becoming one of my favorite styles. I think this one is pretty good, though perhaps not as much to my liking as others obtainable at about the same price.

The first milk stout I ever tried was Founder's Milk Stout on Nitro in a relatively high-end beer bar in NYC. This offering from Widmer is absolutely not remotely the same kind of beer.

The coloring is right, it is a dark rich brown. However that is about where the similarities end.

There are an awful lot of fresh hops in this beer, it is much like a cascadian dark ale. This increases the bitterness and the overal floral-ness of the taste and aroma. Instead of caramel, toffee or brown sugar, I just got hops and a slightly acrid burnt aroma.

The taste was by far not what I was expecting. Thin body, high alpha acid, and a notable absence of creamy smoothness. After reading reviews on here, I wonder if maybe there was a packaging error and I got a bottle of the 2012 Jubelale instead of a Milk Stout. It was so far from the Founder's Milk Stout that I had truly enjoyed in NYC that I gave this bottle to an IPA-loving housemate to finish. He agreed that whatever we had in this bottle was not a creamy milk stout.

TL;DR: This bottle was more of a jubelale or a cascadian dark than a milk stout. High floral hops and thin body.