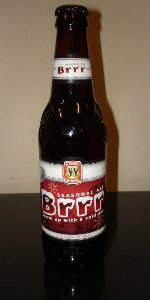 Overall/ This was a very good beer more to the hoppy than malty side. It was a nice beer to enjoy slowly by the fireplace.

Smell: citrusy hops dominate, but you can pick up on the sweet caramel malts

Taste: sweet malts with a well balanced citrusy hop bit; finishes with a resiny aftertaste. I expected spices in it from the label; glad it didn't have it. This was a decent beer.

Mouthfeel: creamy, but a bit thinner than I was expecting for the ABV.

Remarks: Had this beer a while; finally got around to drinking it. 1 year old bottle. Aged well.

Widmer Brothers Brrr Seasonal Ale is a very clear, sparkling copper ale topped with a dense, light beige foam that has outstanding retention and lacing. It has a rich pine aroma with sweet caramel in the nose. It's pretty full bodied, very smooth and foamy. The finish is clean and nimble. It tastes pretty bitter and a little sweet. The balance is really nice. Pine resin is the loudest flavor. The bitterness turns to something more like juniper by the time the caramel sweetness emerges just after the swallow. This one kind of took me by surprise. It's a pretty serious beer and it's really easy to drink.

Great formation of head with great retention to support it, brownish amber color that is bright and clear. Big and flamboyant hop nose of pine resin, grapefruit zest, hemp seeds and a hint of dark tobacco. All of that barely lets the malt transmit anything to the aroma. Creamy, smooth, medium body. Whoa, momma, yes indeed there are some hops here, and what we mean by "some," is a lot. Sporting an Ameri-hop character throughout it starts with a big splash of bitterness and then moves more into flavoring with suggestions of evergreen, grapefruit rind, hemp oil and fresh cut grass. The malt backbone is pretty damn sturdy and while it may be shadowed by the hops, it mostly lays a blankets of caramel and toasted grain on the palate. A tad fruity with a clean, warming alcohol middle to end; quick flash of raisins and plums. Finishes a little bitter and leans toward dry.

A lovely holiday beer, very well balanced and straight, aimed at the style. The Christmas Goose may have met its match.

T-This beer tastes like...standing on the deck of a mountain house in New Hampshire during Christmas Week Wearing a winter hat, heavy peat coat and flannel lined cargos (red & black flannel lining) there's 3 feet of snow on ground and the pine trees are cloaked in snow.

O-Not like other Winter Ales that pack a strong all spice/ginger. A decent beer. Something different at the holidays

Amber with a cap of foam that leaves decent lacing. Smell is sourdough bread, quite malty. Taste is malt, bread, crackers initially with a pungent floral resin-spicy character then blooms mid palate, then a nice washing of hops reigns in the sweetness. Medium body, zingy carbonation. Finish is dry and slightly bitter. Enjoyable.

M- was crisp clean and well carbonated with a hop presence

Appearance – Pours a dark red/mahogany color with a thick off-white head. The thick head fades slowly over time to leave a nice level of lacing on the sides of the glass.

Smell – The nose is much hoppier then I would have expected. A mix of grapefruit citrus and pine are the heaviest of the nose, although there is a light earthy hop smell as well. Beyond the hop aromas there are some smells of a fruity nature of orange and cherry as well as a caramel sweetness.

Taste – The taste starts out with a big hoppy and light roasted malt flavor. The hop initially is largely of a citrus nature up front with some pine mixed within. The pine hop gets stronger as the flavor advances further. While the pine increases, a light sweetness of caramel and some orange come to the tongue. The orange turns to a more orange peel flavor more toward the end with the pine getting rather strong by this time. With the advent of some light spice flavors of nutmeg and allspice, a pine heavy hopped and bitter citrus flavor are left to linger on the tongue.

Mouthfeel- The body of the beer is rather average in its creaminess with a carbonation level that was rather average as well. The moderate body and carbonation suited the hoppy and spicy flavors well, while allowing enough sweetness to shine through and maintaining a good drinkability.

Overall – A rather hop heavy winter warmer. It is quite delicious and one to experience if you have a chance.

Poured from the 12oz bottle into a large mug.

A: Very nice looking beer- a clear reddish brown color with a light tan 2 finger head that has ok retention.

S: Hops dominate the nose, piney with a slightly spicy character. Malt balacing in there, carmel and slightly bready, but mostly hoppy.

T: Sweet at first glance with plenty of caramel and brown sugar, but then hops flood the tastebuds and take over everything. Finishes with surprising balance - hoppy but with a nice bready malty character with brown sugar and spices. Hops are first and at the forefront, but not overpowering.

A good winter beer for the hop lover. Surprising from a company best known for a mediocre wit.

Found at Pies & Pints in Middlebury, CT this seasonal brew is a tea
leaning amber color with a very nice 2-finger-ish light oat colored head and
plentiful lacing. The nose hit includes piney hops blended tastefully with lemon
yeast and light cereal grain. Very pleasing. The flavor comes out with more
hops, a tad more grassy pine with a bit of a spruce/herbal quality with caramel
malt lingering in the background. This seems like a decent DIPA to me, with a
likeable, medium body, medium carbonation and slightly oily feel, though not to
the point of hurting the drinkability. A very nice surprise!

DKHNOVA from District of Columbia