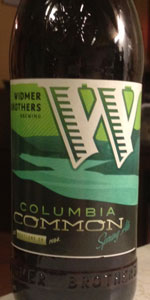 Notes:
View: Beers
Reviews: 48 | Ratings: 234 | Log in to view all ratings and sort
Reviews by artoolemomo:

Appearance- Pours up a decent amount of head which has pretty good retention. The head is pure, cotton-white while the body is a medium amber that appears as a pale to medium amber when held up to the light. Fair amount of lacing.

Nose- Fairly subtle. Light notes of biscuit, faint hints of pine and resin. Some fruitiness around the edges that resembles white grape but nothing very conspicuous. Swirling shows a woody note from the hops and a little more grain.

Taste- Starts off with a good amount of malt that ranges from biscuit to grain to cornflakes. Slight woody bitterness from the hops on the finish. Slight fruit esters but nothing pronounced, just as with the nose. Seems like a good representation of the style but that style is a tad boring. Some pine and resin, even a hint of spice, black pepper. Definitely more assertive that I would expect a 3 month old beer to be. I would place it as above average because it is a rather simplistic beer. Some citrus (orange and lemon) start to come out as it opens up. Some hints toward being a solid, good beer.

Mouthfeel- Light to medium bodied with not a lot of carbonation. Some dryness on the finish.

Drinkability- Pretty easygoing and quite sessionable. Gets a little boring but is Widmer's standard cheap price. Probably wouldn't buy this again though.

Overall- Above average beer that has glimmers of being good. Worth a try, especially if you want another example of the style.

Pours a dark copper with tanish head that foams up pretty good with a hard pour. Head sticks around in a thin film, lacing sticks to the glass ok. Smells like bread, fruity mango or peach maybe no hops really. The taste very much a bread craker taste, not really tasting the fruit I smell. There are no hops just a slight bitterness and not to sweet. Mouthfeel is medium, it has body just not really flavor to match. Overall I would drink this anytime and could problay drink a ton, its easy to drink and has more flavor then ur standard beer i guess.