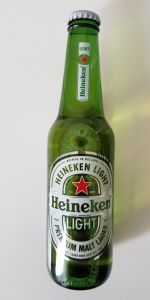 I think this is one of the best imported light beers along with Labatt Blue Light and the Trader Joe's brand from Mexico.
Easy drinking available everywhere.

As if they couldn't have made Heineken worse, they succeeded. This is thin and watery pee-pee water. I can't even begin to describe how repulsive it is. Take Heineken and mix with seltzer, you are now drinking this scum. Avoid.

This lager has an average look. Golden. I find it has a crisp smell. This is one of the best tasting imported light beers on the market. It is light and crisp in its feel with a clean finish.

12 oz bottles from Giant in Bartonsville, Pa. I thought this would be inferior to my go-to light beers, Amstel Light and Sam Adams Light. I was pleasantly surprised!

T: Wow! Not bad! Reminds me very much of the original Heineken Lager, same malt and hop complexity.

F: Exactly what you'd expect. Crisp and almost refreshing for a lager, the hop character and light body remind me more of Belgian ales than Dutch lagers.

O: One of the best mass-produced light imports I've tried. I've heard tell of flat or overly-funky bottles. I'd suggest sticking with cans if possible.

My ratings are in consideration of this being a light beer. I think light beers should not be rated against non-light beers. They deserve their own category... That said, Heineken Premium Light is a better beer in it's class than traditional Heineken Lager is in the class of non light import lagers... Finding a good light beer is very hard and finding a light beer at a local bar is usually the undrinkable Bud Light, Miller Light, Michelob Ultra, etc... Among these watered down abominations Heineken Light taste quite good. Can't hold it's own against full bodied, hearty beer, but for providing something that actually taste like a beer for under 100 calories I would have to say Heineken Light is second only to Sam Adams Light (and Sam Adams is actually 120 calories/bottle).

It's not a craft beer but it is one of my favorite industrial mass production beers. Years ago I would have preferred the Lager version but with the years adding up, this Light Lager version is good for me. For entertaining family or friends who don't drink craft beers, this is my go to beer.

For $1.09 a pint, you simply can't beat it. More flavor than any other light beer at this price point, and low enough ABV that I can drink it all weekend.

Appearance  This stinker came out of the lovely green bottle a solid yellow in color with a nice white head that actually left some lacing on the inside of my glass.

Smell  The skunk was in full effect here just like it was for Daddy Heiny. The putrid smell of rotten grain and moldy Pixie Stix filled the room instantly.

Taste  Oh, this is gross. I can kind of taste some grain but other than that its like licking a skunks asshole after he just inhaled two giant been burritos and a dead goldfish.

Mouthfeel  This is light-bodied with a disappointing carbonated fizzle.

Sinkability  This was a very sinkable beer.

This wasn't as bad as I was expecting given its origin and reviews here. It must have been a fresh bottle I got because it actually had a decent hop flavor and it went very well with the food I had. Refreshing on a summer's day.

Years ago this beer was terrible. One of the worst beers I've ever had. Then on day my dad had some in the fridge and It was too late to get some of my own beer so I cracked one open. My first sip I was blown away. They completely changed the taste of the beer. I hated the old taste but this new taste was amazing in my eyes. I thought maybe something had spilt on the top of the can and was enhancing the flavor so I washed the next can before opening it. It was just as good. I started drinking that beer over time and now it's my favorite beer. I even got some people who used to hate it, like myself, to agree that now it is a very good tasting beer. And it has low calories.

Sparkling pale gold with a large but light foamy white head. Demerits for the terrible bottle.

How the hell this shite beer has better ratings than any number of far better AALs and BMCs out there, I'll never know.

Heineken Premium Light Lager brewed by Heineken Nederland B.V. This light larger has an ABV of 3.30% The brew pours out a nice golden amber color w a small white head. Spotty lacing to this brew, really thin like. The smell is rich with grains, and malts. You do pick up on some nice hop notes in the smell of this brew. There is also a hit of skunk in the smell, not as bad as I was expecting. Now for the taste, light with with good flavors. The thing I really like is there is no skunk flavor to this green bottle brew. That is a plus in my book. This is a really nice crisp light brew, it goes down nice and smooth. There is a real nice balance to Heineken Premium Light Lager. There is nothing overpowering about this brew. The mouth feel of Heineken Premium Light Lager, is Thin, Light, Crisp and Refreshing. This brew would go nice on a hot summer day. Kinda was hoping for a bit higher ABV but it is what it is. Like I said this brew taste better than regular Heineken. This was a brew that I was not going to review because of negatives of the original Heineken Premium. However I'm glad I gave this brew a honest chance, and I will be buying this brew again just to change it up for a bit. Overall all I'm giving Heineken Premium Light Lager a soild 4 out of 5. Nothing to write home about but a nice smooth crisp light brew. Heineken Nederland B.V., did a real nice job with this light larger.

Definitely my choose for a light beer over the big ones. Still holds a lot of the flavor from the original which never happens. Not one to go for the light beers but if you need to here it is. Cheers

this beer is way overhated. people see "light" and assume the worst. this is actually better than heineken heavy, and a good representation of a german lager

A: Pours a very pale yellow, it looks like the fizzy lager you see in British bars in the movies. Head is medium-sized, white in the beginning, dies down to a thin film fast, no lacing, good head retention for a light lager though.

S: Actually has a nice Saaz and noble hop scent, smells a lot like Beck's, no skunk.

T: Taste is a letdown after the surprisingly strong smell. Very, very light taste, haven't had something this light since Michelob Ultra. Doesn't taste bad, just nothing much there. Light grain husk, seltzer water, has a bit of a spicy hop bite at the end, a very clean flavour, the Boston of light beers.

M: Light-bodied, fizzy, but has a better overall feel than its brethren, there's is something there, not just fizzy water.

D: Honestly, I have no problems drinking this, and I'd probably take this over Heineken regular. But to the beer fan, there is really nothing in terms of flavour profile to make me come back. Good for what it is, but I'm not going to buy this again with the multitude of brews on the market in SoCal.

I sampled every light beer possible a while back. Just about all were putrid. This was no exception.

Pours a water yellow. Surprisingly high carbonation. Seltzer mouthfeel. Actually has a bit of a hop background (!!), but it still tastes pretty bad, and there's the standard skunky malt aftertaste.