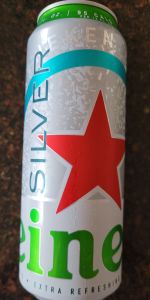 Reviewed by misteil from Ireland

2.25/5  rDev +6.6%
look: 3.5 | smell: 2.25 | taste: 2 | feel: 2.5 | overall: 2.25
beer number 800! my tradition for every century is to have a beer which i reckon will be bad or is infamously bad to begin with, but when i went to the store today to pick up such a beer, i didn’t really have many good options. i’ve, regrettably, had some pretty reprehensible beers since moving to the netherlands, many of which would have been perfect for this, alas, i settled for a can of heineken silver. hating on heineken seems like a bit of a craft beer nerd cliche, so i was little reluctant, and i figured it wouldn’t be that bad, but sure look it was there and i bought it (come to think of it, heineken 0.0 was my beer 700… a theme is emerging). sure enough, this beer is very bad, it tastes like having beer described to you. it may well be the least flavoursome beer i’ve ever had (mind you i’m not very well versed in american light lagers so i don’t know much about beers intentionally low on flavour). this beer tastes like sweet white bread, and it’s a mild taste of that too, and that’s it, really i’ve got nothing else, maybe a slight astringent metallic taste on the finish. beer is light in body with medium carbonation, incredibly dull, not offensive in taste, but not good.
Apr 05, 2022
Heineken Silver from Heineken Nederland B.V.
Beer rating: 2.11 out of 5 with 3 ratings