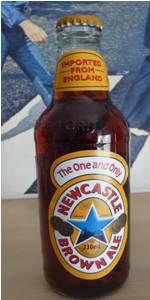 This is an incredibly disappointing beer. I could end there but will keep going...

Purchased at Purvis Beer in Richmond, a suburb of Melbourne, in Australia in November 2021.

The beer looks more like a soft drink in the glass than a beer. Its clarity is astounding for a brown beer; it's a burnished copper with light brown highlights where the light reflects from the glass. But that is as good as this beer gets.

Aroma-wise, there's a sweet, syrupy cola/Dr.Pepper mix that brought to the fore thoughts of fly spray and even citronella. There was nothing appealing at all about the smell, in fact quite the opposite.

Taste is no improvement on the smell. It's as sweet as the aroma hints, and there's that cola/Dr.Pepper thing going on. It's clearly a light struck beer as evidenced by the skunky, metallic taste that overrides everything else.

In the mouth it's thin and light, just like a soft drink.

Overall this is a disappointing shell of a beer. I understand it's now brewed under licence, and can only presume it's been bastardised in the name of fiscal efficiency. Well, I can't imagine ever paying to drink this beer again, so I suppose it will help with my fiscal efficiency, so mission accomplished?

Gave the look a four because it looks like a Newcastle Brown Ale. However, my understanding is that this is now a Lagunitas product. Combined with the recipe change five or six years ago, the firm’s obstinate refusal to do away with the clear glass that ruins the beer and selling out to macro garbage like Lagunitas, this is undrinkable swill. One of the admonishments from BA is that we’re supposed to be respectful of the brewer. That statement is obviously ridiculous, taken out of context. I understand the idea behind it though. As such, I didn’t give it straight ones.
I have had Newcastle Brown Ale in not a few pubs across the pond, as far back as 1997. Reviewing that beer would be a wonderful time. Drinking this (er, taking two swallows and pouring out the rest) was such a departure from those halcyon days, I may have unconsciously used this beer as a stand in for my deep regret of having returned to the Disneyland Freakshow States of Oligopoly.
Whatever the case, this is tragic. No, this was never the finest beer. But it was relatively inexpensive and decent (out of a keg) - pretty much the opposite of whatever this is.

Drank this so much and so often in the 90s I certainly tried, and failed, to replicate it when I took up brewing. Wasn't even close, enjoy one very now and again, but of course there's better browns about these days.

I still remmeber stealing a few of these out of my dad's minifridge to bring to a neighbor girl's house, swigging it while grimacing, pretending to like it...

It's a supremely bland take on the brown ale, with tons of budweiser flavor and none of the savory goodness a true brown ale should have. Gutter tripe

They can do better. The first time I made my own beer for a youtube video, I made a kit called "back to basics beer" It was nothing fancy, 6.6 pounds of DME, some copper colored grain in a bag some hops and Nottingham yeast packet. My beer, with mistakes I made like squeezing the bag, stirring the wort, not mixing the priming sugar with hot water and some other rookie mistakes, my beer came out tasting better than a New Castle Brown Ale. NCBA is good with making beer bread with it, but not drinking it. This is just okay I prefer Bass Ale over NCBA.

What could they possibly have been thinking when Lagunitas turned Newcastle into this syrupy brown pablum of an excuse for a beer? This was a unique ale in almost every way, but foremost in flavor and texture. Now it is entirely unremarkable. Avoid this like the plague if you are expecting anything like what this justly famous ale was known for.

Purchased as a six-pack from Wal-Mart for $9.99. Poured into a nonic pint glass.

L - Clear brown, with a red tinge. Two-finger quick-to-dissipate tan head.
S - Bready, nutty. Some biscuit and toast notes. Slight pepper on the back.
T - Caramel. Toast. Pumpernickel bread. A slight sweetness, but not sweet overall.
F - Extremely carbonated. Refreshing. Despite the color, it's light in body.
O - I would say this beer sets a certain bar for a certain type of beer that's cheap, satisfying to drink, and goes well with every meal. Not a bad beer in the slightest, but I wish it had more of a bitterness to it. On the pricier end of the spectrum for a macrobrew, but I wouldn't mind getting this every so often. Would recommend trying at least once.

(Bottle). A good but somewhat overrated beer. Aggressively carbonated. Better in the Good Old Days when it was stronger.

Rerate, draught in Newcastle: I found the colour to be darker brown than the bottled version (can that be?), and the flavour was fuller and richer - even though the pub tried to ruin it by serving it ice cold.

Newcastle, 12oz. bottle poured into my weizen glass(20oz.) starts with a nice three finger head of a light tan foam. After several minutes it did settle back to a thin cap with a bit of lacing left behind. This ale is a dark brown that is somewhat orange when held up to the light. This beer is clear, so I can observe the moderate carbonation cascade up.
The aroma is light bready malts.
The flavor starts with a crispness up front, the light hops, giving way to sweet caramel malt flavor.
The feel is light, a bit thin.
This is an easy one to drink, the flavor is ok, the feel is light. I wish I would have one of the originals to see what all the fuss is about! !

This is not Newcastle brown! Please alter the name as you have completely altered and ruined my favorite brown ale! Because you have done this I will not be drinking Brown Sugga,Pilsner, lil Sumpthin, or any beer offered as a Lagunitas product. Thanks for somewhat destroying a part of my beer experience!

This is not Newcastle Brown. Have some respect for a brand that has been around since 1927. Awesome, you own it now, Langunitas. Free enterprise at it's finest but if you're going to completely change the recipe at least have the decency to change or at least alter the name to 2.0 or remix or something. To all of the basically kids that are giving the lol to people like me, you just don't get it. I've been drinking Newcastle since the early 90's. You may as well hand me a bud light and say "here's your newkey". NO IT'S NOT. This is not about whether or not this beer is any good. If you like it then fantastic. The point is you can't just fancy up the label and call it the same thing. Have some respect for the brand. I personally will not buy another Langunitas product again and that's my choice. Rant complete.

Another beer thrown to the wolves.

Really gone downhill since John Smith's started breing it.
I used to love a pint of "dog" but won't touch it now.

Appearance: Pours a deep ruby amber color that is dark, but some clarity. Moderate tan head. SRM of 20. (3.75)

Aroma: Moderate aromas of baked nuts, brown bread, with hints of caramel. A bit of A1 Steak Sauce on the aroma too. (3.75)

Flavor: The flavor follows with more brown bread, baked pecans, walnuts, cashews, lightly laced with caramel. Malty, but rather dry at the end. Has sort of a Roast Beef flavor too. (3.50)

Overall: A pretty good brown ale. Has some hints of fruit esters that I percieved as A1 Steak Sauce. I also detect a bit of a roast beef flavor here. ... I call it how I see it.
But nevertheless, it has nice brown bread and baked nuts flavors. Also has a decent amount of carbonation to give it a nice body and keep it dry. Drinks quite nice and I would say pretty standard for an English Brown Ale. (Final Rating: 3.68)

Pours from bottle a light mahogany, solid 2" inch head, lots of lacing left behind throughout the drink. Nose isn't too powerful, but notes of caramel and earthy hops. Taste tilts more towards those earthy hops than I remember from pre-Lagunitas bottles, but as it warms and on the finish, the maltier caramel elements poke through a bit more. Mouthfeel is full and creamy.