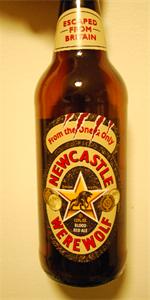 An earthy, chalky, dirty, smokey taste. All followed by a burnt caramel follow through.

Taste Rating in Words: Crumble a cigarette in dirt add a pinch of caramel and go in head first.

Has the appearance of a Heineken with a little bit of food coloring added. Tastes like a mass produced European beer with a touch of roasted barley and some sort of adjunct added. Bitter hops flavoring that is powerful and doesn't match the style. Odd carbonation with a weak head, low alcohol, and a thin body. An embarrassment really. And to think I could have just reached for the regular Newcastle instead.

Bottle from Albertsons. Exceedingly average beer, faint aroma and taste, a little bit of roast malt and hops bite that fades fast. Not much to write home about here.

Mouthfeel was more thick than the reg, but that ain't hard. Straddles brown and red ale territory.

12 oz. bottle, no bottled on date present. Acquired a single bottle of this stuff as part of a mixed six pack.

Poured into a Duvel tulip snifter.

A - Pours a dark semi-clear garnet reddish brown body. Slow rising streams of carb. One finger of frothy thin off-white head. Some okay fluffy scattered lacing. Looks okay for what it is.

Overall, bland and uninteresting. Would prefer the original to this.

Appearance: Pours a pretty, clear, deep, dark, mahogany color, speckled with reddish highlights and a quarter of a finger of white-colored head that quickly dissolved away into a thin lacing of foam that completely covered the top of the beer.

Aroma: Very aromatic with bready, toasted malt aromas, as well as some funky, spicy rye, which impart notes of freshly baked Jewish rye bread. I also get some aromas of black pepper, caramel and a touch of piney, resin-like hops.

Mouthfeel: Medium-bodied and pretty smooth as there is very little in the way of carbonation. With an ABV of 4.5%, there is no alcohol on the palate.

Overall: As stated above, this is an interesting beer. It has lots of woody, earthy, spicy, slightly sour rye flavors which is almost overpowering. While I much rather prefer a regular Newcastle Brown Ale, this isn’t bad. It’s better than the Newcastle Bombshell, that’s for sure.

Comes out of the tap a nice clear golden amber. Head was a bit thin, but that must be an artifact of the pour. Aroma is malty, hoppy and dusty, rather pleasing. Flavor is somewhat bitter, malty and a little fruity with a hoppy undertone, bitter but not too much so. Firm texture is smooth and has plenty of fizz. Overall, one to make you howl!

So I love regular new castle but this werewolf was horrible, I had to chase it with other drinks to get it down and struggled to pawn it off. It reminded me of old coffee grounds mixed with old beer and dark hops just horrible.

Appearance - 3/5
Not 'blood red' like the bottle says. Rather a orange-brown-red. Quite clear, although the color is darker so it's not like you can see through it super well. About 1 finger of head upon initial pour, dissipates almost immediately to no head at all. Carbonation rising through the beer is sparse.

Smell - 4/5
The aroma is like a red wine. Perhaps a Merlot or Cabernet Sauvignon (I don't know anything about wines so don't quote me on that). There is a bit of sweet malt smell, the aroma is slightly berry-like. I don't remember smelling any beer that smells this close to wine before. I always love interesting aspects of beer like this, so bonus points here.

Taste - 3.5/5
The flavor is hard to discern, rather bland actually. A bit of slightly sweet, fruity (cherry?) malts, some alcohol, a tiny bit of hop bitterness near the latter part of the sip. Not a terrible flavor, just not strong enough.

Overall - 3.75/5
This was an interesting beer, and while I would have liked some more flavor, overall I have no major complaints.

From the bottle in their branded glass. Appearance is a translucent reddish-brown with a hefty head. Slightly fruity smell and starts with a sweet taste eventually going to bitter (which saves it since I don't like sweet brews). Feels medium-light bodied with a bit of hoppy bite. (I usually don't like strong aftertastes but it's not bad here.) Overall pretty good for a seasonal and a nice change from Newcastle Brown which I like alot.

I don't think I've ever had a less enjoyable experience drinking a beer. The aroma was a tad on the earthy side for me with a distinct hint of dirt. However, the real fireworks arrived upon the first sip with a powerful initial burst of flavor. I generally try to be more flowery in my descriptions but the taste of this beer can only be compared to that of saddle sweat…it's literally like drinking a werewolf. I would suggest trying it, if only for the novelty of experiencing the worst beer you've ever tasted.

Poured an auburn, clear color with 1-to-2 fingers of off-white head. A few bubble streams coming up from the bottom of the glass. Minimal lacing on the sides. Minimal retention on the top all the way down. (Sight - 3.00)

Not a good Irish Red Ale, especially after having Alpine’s McIlhenney’s Irish Red the other night. Would not have it again. (Overall - 2.75)

Taste: Caramel toffee sweetness fades too quickly into a somewhat musty damp malt base. A slight solvent in the finish goes a bit airplane glue.

Feel: Medium body, medium carbonation, some oil in the finish.

Overall: The solvent aspect takes a lot away from a beer that had potential.

Pours a nice red brown color with an off-white head that doesn't last long but leaves nice lacing. Taste is somewhat like a light caramel that hints at something darker and richer, but never shows its face. Disappointing. Smell is typical of most British ales. Has a lighter mouthfeel and is relatively refreshing. Overall this is something I'd drink without complaint but wouldn't go out and buy myself. Cheers!

Clear brown with two fingers of off white head that lasts about five minutes but leaves a fine amount of lace. Smell is bready with some noble hop aroma. Taste is mineral water sweet bready malt and just a touch of noble hop herbal bitterness.
Mouthfeel is light to medium and carbonation is fairly low but to be expected for the style.
Very much a British beer style. Very tasty beer and one I would have again.

L: Pours a rich blood red with a fair amount of head that becomes a very thin lace. The beer is clear with a couple carbonation bubbles. Good color and clarity, but lacking a bit in head and carbonation.

S: Very sweet caramel malt and raspberry notes jump out at you. It is quite fragrant, but overwhelmingly sweet and I find that off-putting. There are some raisin and bready malt notes underneath, but it smells more like an idiosyncratic fruit beer than an Irish Red.

T: Light and bready up front. Fruit and caramel notes coming in on the body to mix in with some slightly roasted notes. The bready flavor remains surprisingly prominent all the way through the finish. As it goes down it leaves one unsatisfied with a finish of watery bread and some lingering caramel raspberry on the palate. There is some good complexity in the body, but overall disappointing.

F: Zesty and bready, but very light and watery. I'd like a bit more thickness in an Irish Red.

O: Overall, this really doesn't have what I want from an Irish Red or a fruit beer. It's much too watered down to really enjoy a blend of raspberry and classical red ale notes. There is some good flavor on the tongue and a brief moment where you can taste raspberry and caramel notes coming together to make a good beer, but it isn't sufficient to make this beer worthwhile for the mediocrity and wateriness that makes up the majority of your drinking experience.

This beer was poured from a 12oz bottle into a Blind Pig mug and enjoyed at apx. 55F.

nice clean taste of a darker ale can taste a bread and caramel taste in the finish. I was a good beer and I would drink it around my mid beer snob friends and family.

Arom is of a slightly bready malt. Pours a deep amber red with light beige small head. Head disappears rapidly and leaves a tracing of lace. Taste is of dark fruits; date and fig, some mild berriness. Bit of bitey bitterness in the aftertaste. Warming for a chilly evening.

A: The beer is a coppery brown color, with a short off-white head that fades very quickly and leaves a thin lace on the glass.

S: The aroma contains caramelized malts, tea, honey, some fruit and some hops.

T: The taste starts out bready with a hearty but not too heavy malt character up front. Then some mildly sweet flavors of caramel, tea & honey come in. The hops presence is mild but complementary and brings a decent balance. The after-taste is slightly bready and slightly sweet.

O: Tasty, goes down easily, not too filling, mild kick, good representation of style, this beer was somewhat better than I expected it to be. Although there are better options within the style, this beer is worth drinking for a while if you’re in the mood for the style.

Pours a beautiful brown see-through. Aroma is light with sweet malts. Taste is ok with malt prevelance and a little bread. There is a overpowering doughy bread taste as it goes on. Overall, ok balance but seems a touch heavy on the cool sweetness.

Pours a dark brownish red color with an off-white head with solid retention and lacing. The aroma is sweet malt, plums, raisins, and dark bread. The taste is very sweet up front with a good dose of malts and slightly toasted grain and a lingering sweetness well into the finish. Overall, not a huge fan of this one. The sweetness is overpowering for my taste buds, would have prefered a drier finish to this one.

The color is a rich barley brown with a tinge of auburn and a thick but fleeting head.

The nose is quite inviting for fans of malt with a subtle burnt grain. This has touches of nut, barley, roasted grains and kilned malts.

The flavor is a tad sweet with a nutty, caramel and toffee. It actually reminds me of Fiddle Faddle, a toffee coated popcorn with peanuts. As it warms it begins to lose flavor but it has a decent roasted grain and barley taste.

Im sure it's vogue to pan this beer but I found it to be rather flavorful and a decent "Macro" brewed Irish Red.

poured from 12 oz bottle into a snifter, pours typical of an irish red. Little to no head and minute lacing after ten minutes. The aroma is pretty disatisfying consisting of mainly malt and smokiness, though some sugary/buttery aromas come through as it warms. The taste wasn't much better with first mouth feel tasting mainly of malt, with an after taste of crisp bread. Mouth feel was very light, but perfect amount of carbonation. Nothing I'd recommend overall.