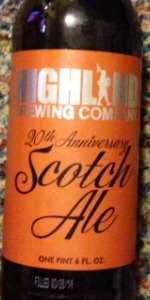 Filled on 3/28/14.Ever since I have moved here Highland has been the main stay here in NC,nice to see them come out with a four part series for their 20th Ann.Pours a deep amber/mahogany with a sticky light beige head that settles into a frothy mass.The aromas left we wanting more I must say,a bit of brown sugar-like sweetness and meatiness.A little fizzy and thin for the style and abv.wich left me a little perplexed as well.Caramel and a hint of butterscotch on the palate that turns into a toffee finish.The flavors are ok but the mouthfeel leaves much to be desired,the flavors could have a little more oomph to them as well.Iam really let down by this beer,Highland is a great brewery but man this is a downer here.

Just a Wee Bit Different. I have enjoyed Highland brews for years and will continue to do so. While they don't make any thing fancy or whales so to speak they brew some solid beers that will always have a spot in my beer fridge. Grats on 20 year guys.

Pours a reddish brown with a nice tan head that falls slow to a cap that leaves some descent lacing.

Aroma is malty and earthy, caramel malts, hints of dark fruit, peat notes and hints of smoke. Along with a wee bit of hops to finish it out. Pretty much right on par for the style.

Taste is Just like the nose, a nice big malt presence, caramel with toffee hints good earthy notes light dark fruit hints. Finish gets lightened by the carbonation that's when the fig/plum notes appear and linger through out the finish with a dash of hops that add just the right touch of grassy/herbal notes.

Mouthfeel is nice big bodied brew to start then lightens up in the finish to medium with the carbonation burst.

Overall pretty much spot on style for this brew. Wouldn't mind having this one as a regular brew from Highlands. Also not notice of the 8% anywhere.

Appearance: Pours a clear tea brown color with a nice ecru head; plenty of lacing sticks to the glass

Taste: As in the aroma, the flavors present caramel and plum; there is a bit of spiciness that arrives in the middle but, overall, relatively little flavor progression

Overall: I am surprised that, given the Scottish theme Highland uses, that they didn't come up with a more interesting take on the style for their 20th anniversary; no peat, little earthiness and, overall, somewhat of a disappointment though it is readily drinkable

Appearance: Pours out a very dark, tawny brown body with just at an inch of light beige foam.

Overall: While it's not the most characterful scotch ale, it isn't rippling with malty sweetness, isn't jam-packed with peat-smoked malts, isn't coarsely boozy, etc, I liked it well enough. It's good, albeit understated.

Nice to see a special release from my (nearly) hometown brewery. Hard to believe they've been around for 20 years now.

Poured into a snifter out of a 22oz bomber.

Pours a very dark brownish-red with a one finger off-white head. Really good head retention and excellent lacing; forms a nearly solid ring all the way around the glass.

Unfortunately, the aroma is a bit weak. A touch metallic but there are smoky notes along with touches of peat and caramel. There is a noticeable earthy character about it which is kind of nice.

The flavor is much more bold than the aroma. Lots of smoke and earth on the flavor along with some lighter roasty notes. Just a bit of metal as an off note but it doesn't really detract all that much. Very slick and smooth mouthfeel with just a light bitterness. Alcohol is very well hidden and the finish is on the dry side for this style.

Overall, looking at the malts in this beer there is no peaked malt. I'm not sure where the peaty/earthy notes come from but I love it and it fits the style well. The aroma could use some work but I feel like this beer is well put together.

A: Poured from a bottle to a pint glass. Had a copper color and a mostly clear consistency. There was an of foamy, fairly long-lasting head. OK lacing.

S: A decent aroma of malt and caramel - typical of the style.

T: Tasted of a fair amount of malt, a bit of hops, and some caramel thrown in as well. While not as forceful a flavor as you might like, this is a pretty good one.

M: A moderately carbonated beer with a dry finish. Medium-bodied.

O: This is a solid beer that doesn't quite cross over into being great. Still, worth a look.

On tap at the brewery.
Dark red-brown, nearly opaque, with a decent head.
Tame for style. Lightly sweet. Drinks like a cross between a Scutch ale and a brown ale. Does finish more like a Scotch Ale, with a trace of smoke.

22 oz. bomber poured into the larger version of the Sam Adams perfect pint glass. Comes out dark, darker than expected for the style. A deep, deep hearty amber color; autumn brown, like a leaf with just a little bit of life left in it. Glows a little lighter when held up to the light; good clarity. Off white, brown egg shell colored head, mostly small bubbles. A little bit of lacing to it, not much though.

Smell is good. A lot of nice roasted malts and grain. Straying aromas of raisons (red and white) as well as maybe some dehydrated plumb. Some slightly grassy hop aromas as well.

Taste is a step up especially because I find the flavor to be much more potent than the aroma. The large amounts of pale caramel malts stick out right away, in addition there's lots of darker roasted malts as well. A little bit of the above mentioned raison and dehydrated plum flavors, provide the slightest bit of tangy fruity flavors that's slightly sweet towards the end. There's a nice spicy hop flavor that's a little mild and it finishes it off well.

Mouthfeel is really good. Medium body with a low carbonation level. Really smooth, and feels cool and clean the whole way through. There's a nice spicy finish at the end, fairly clean. Really drinkable beer, feels clean and well crafted. Doesn't surprise me, Highland has really become a brewery that I have a lot of respect for. Huge thanks to Paschal for sending me this bottle as a father's day gift out of the goodness of his heart. Thanks a lot!

22 oz bomber from FmcD's poured into a tulip.

A - Dark black and brown with ruby highlights. Pours with a one finger head that moves to a thin white lace.

T - Cola, slight touch of burnt grains, maybe some syrup, caramel, malts. The alcohol lurks in the background, and there is little to no semblance of smoke.

M - Has some depth, even though it is a touch thin. I am sensing a hop presence that keeps this form being overly sweet or cloying.

O - This is a tasty one. Highland has always presented solid and occassionally outstanding offerings. Recommended while it is available.

"Rich flavors blend beautifully in this medium-bodied ale. Sterling hops subtle spice nose gives way to the taste of rich caramel and roasted notes. Brewed with the finest traditional Scottish malts, American malts, and English Fuggle hops, this is a beer worth celebrating!" Brewed in the style of a Scotch Ale. Available in 22 oz. bottles and on limited draft. Release #1 of 4 over the course of a year celebrating the brewery's 20th anniversary.

(Appearance) Pours a foamy, frothed tan head over a deep mahogany amber body with high clarity and ample carbonation. Retention is average and lacing is light and spotty. 3.75

(Mouthfeel) Texture is slick, lightly residual, clean, silky smooth and lightly dry. Carbonation is moderate, generating a light frothiness and a moderately crisp finish. Body is shy of medium for the style, medium overall. Balance is slightly sweet over earthy and nutty bitter. Alcohol presence is mild and there are no off characters in this ale. 3.75

(Overall) Overall a pleasing ale. That said, I recall a much more robust and flavorful Scotch Ale of Tasgall, brewed as a rotating release for many years prior, and hoped for an anniversary celebration ale a little less trimmed down than this beer boiled down to. According to the bottle, I think modesty may have been what they were going for, especially with three other releases on the way. Regardless, I favor Highland as one of the more enjoyable pioneers of bringing this excellent and underrepresented style to the mainstream craft movement, and found this ale overall enjoyable, if not playing it perhaps "too safe" for the sake of the mainstream consumer. That said, expect something very drinkable, but not too memorable. 3.75

20th Anniversary Scotch Ale from Highland Brewing
Beer rating: 85 out of 100 with 82 ratings